Yellow Vests Have Created a Fertile Ground for Terrorists - General

While the French Vigipirate plan has just been raised to its maximum level of alert, a fifth Yellow Vests’ protest is to take place this Saturday, December 15. Is France’s law enforcement capable of ensuring the safety of the country’s citizens?

Sputnik has discussed the issue with Jean-Louis Esquivié, General of gendarmerie and right-hand man of the anti-terrorist unit of the Elysee in the 1980s.

Sputnik: In your view, could terrorists "take advantage" of Yellow Vests calling for "marching to the Elysee Palace"?

Jean-Louis Esquivié: I've been fighting terrorism for many years, including on the ground, so I have no doubt about that. The crisis we have experienced is a fertile ground for these terrorists. 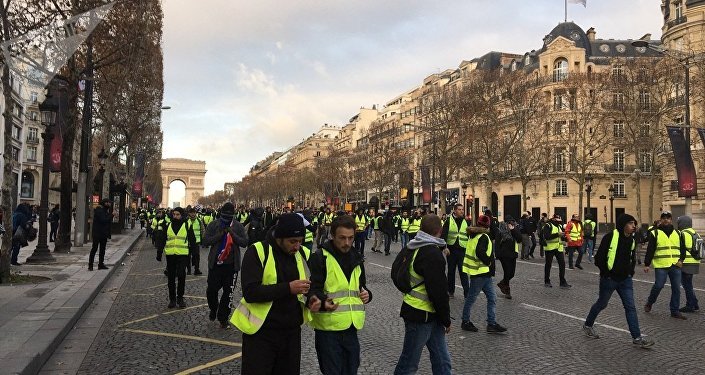 © Sputnik /
Yellow Vests Are a Tsunami That No Power Can Prevent - Political Scientist
Some experts wonder what the connection between extremists seeking to destroy France and jihadists is. I cannot answer this question, but I think this is fertile ground for terrorism.

One might wonder why the jihadists didn't take advantage of recent protests. There was so much chaos; that reassured them and they decided that was already good enough for them.

Answering your question, I can say that at the moment we have a rather friendly environment for terrorism. There is this connection to jihadists through the nihilism of the mob that has turned Yellow Vests into a one-time disaster.

Sputnik: Recently, there has been much talk about the exhausted condition of the police.  Do they have sufficient means and manpower to ensure security if the terrorist threat is added to the violence that took place on the sidelines of the Yellow Vests' protests?

Jean-Louis Esquivié: My answer is yes. I am no longer in business, but I did participate in a number of things, including at the highest level, to get a sense of what is happening.

© Sputnik /
Egypt Prohibits Yellow Vest Sales to Prevent French-Style Riots - Retailers
Just remember when President Hollande deployed the French army to Mali and, at the same time, tried, with a covert action operation, to rescue a special forces soldier that had been taken hostage. It was said at the time, that few countries were able to conduct two operations at once, like this one.

In terms of security, we are rather strong. For several weeks, the sovereign side of the state has manifested itself through the military forces as well as police, gendarmerie, firefighters, and hospitals. Not only have these forces maintained democracy, but also the order and fundamental values of our country.

It's obvious that the fatigue is there as the units are probably at the maximum of what they can do. I know the gendarmerie well. I can't imagine that, in the case of an emergency, a gendarme would count his working hours.

Sputnik: Isn't it harmful that, in times of crisis, there are two men — Christophe Castaner and Laurent Nuñez — heading the Ministry of the Interior?

Jean-Louis Esquivié: It's a political question. Though I'm no longer in business, I remain attached to the military stuff and to my status. I think that someone like Mr Nuñez, who has proven himself in a number of ministries, is technically competent. As for the minister, he is a politician. There is politics to be done when one is Minister of the Interior.

I would say, and my friends do agree with me here, that there is a complementary nature in the Ministry of Interior. As far as I know, there have always been very technical people next to very political ministers. I don't think this is something to worry either the people of the Ministry of the Interior or those of the gendarmerie.

Sputnik: Do you think the authorities are capable of dealing with the popular movement of Yellow Vests, the violence of extremists and suburban youth, and the terrorist threat?

Jean-Louis Esquivié: That's a very good question, and the media should ask these types of questions.

For a month now there has been this demonstration of the strength of these democratic and republican forces, which are the police and the army. We can observe it through three successive elements.

© AFP 2019 / Nicolas Tucat
Over Half French Citizens Believe Yellow Vests Protests Should Stop, Poll Reveals
The first is the success of General de Villiers through his books and interviews. The second event is that the police, even with those terrible things like that of December 1, has managed to maintain order. The third element is that it is the police who are on the ground from the very beginning. In this turbulent period, it was the government's forces that were the stars.

Are the authorities able to deal with all this? We can say that they are working at their full capacity though they haven't reached their limit. The last requisition for the gendarmerie was 106 squadrons out of 120. I have never seen anything like that before. That's almost 90% of all the units. Knowing that they are taking turns and they can have rest, there are 50% units operating permanently.

We still have some reserves. If there was a significant danger, we could count on a huge number of the Ministry of the Interior and the Ministry of Defense people who are aware of the role they have played over the past month. The state security institutions have had an eminent, almost stronger role than the political ones, in maintaining order.

Sputnik: After the Strasbourg attack, will the government be able to count on a form of national unity as was in 2015?

Jean-Louis Esquivié: I don't really see how there is no unity. This is natural. With what happened in Strasbourg, the events planned this weekend by the Yellow Vests, in my opinion, will attenuate by themselves. This is already a sign of unity.

Then, I don't see a political leader not making a speech of compassion and serenity. I think that we will have some calm; it is fortuitous, but it happens just at a moment to end a previous crisis. I see it like that.

* Denis Allex, a DGSE officer, was sent to Somalia to train the troops of the Transitional Federal Government of Somalia. In 2009 he was kidnapped. On 11 January 2013, in Buulo Mareer, there was a French military operation to release of the hostage; however, the operation wasn't successful.

** On 19 July 2017, Army Chief of Staff General Pierre de Villiers resigned in protest against the reduction of France's defence budget.

*** During the Yellow Vests' demonstration, the Arc de Triomphe was covered with graffiti and the interior of the museum was destroyed.

Views and opinion expressed in the article are those of Jean-Louis Esquivié and do not necessarily reflect those of Sputnik.