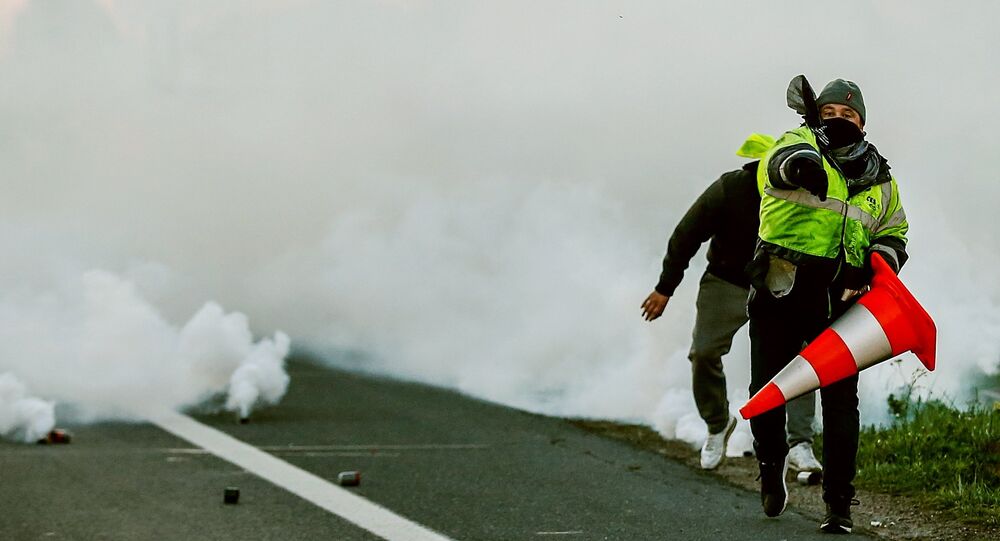 MOSCOW (Sputnik) - A lead activist of the French anti-fuel tax movement said Thursday that demonstrations would go ahead this weekend until all their demands are met.

"We, ‘gilets jaunes,’ demand a deep cut to taxes on essentials: energy, housing, food, clothes … and a significant cut to salaries, privileges, current and future pensions of senior state officials", Priscillia Ludosky was quoted as saying by France Info at a press briefing in Versailles.

Government spokesman Benjamin Griveaux urged "yellow vests" protesters to call off this Saturday’s rally after President Emmanuel Macron’s policy U-turn. He said authorities were not banning it yet.

© AP Photo / Etienne Laurent
French Government Faces No Confidence Vote Amid Yellow Vest Protests
The French government has scrapped a planned hike in diesel taxes, which forced motorists to take to the streets last month, giving rise to a protest movement identified by fluorescent vests, their garment of choice.

But the yellow vests have now morphed into a broader protest against government policies and rising living costs. This Monday, Macron promised to increase the minimum wage and cancel the tax on low-income pensioners, among other measures, which many protesters say is not enough.