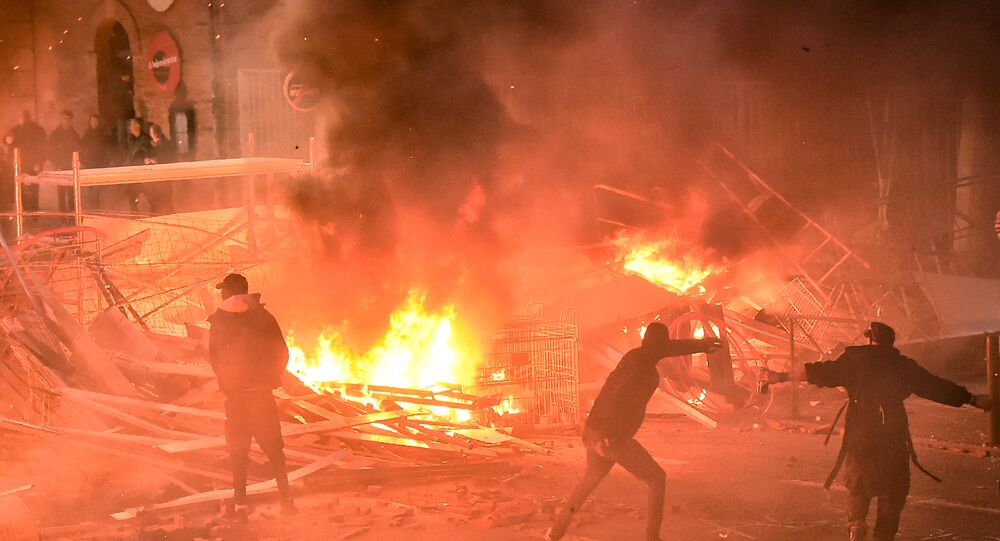 "In reality, the struggle of the Gilet Jaunes [Yellow Vests] is a cry for help from people who struggle every month for existence", said Andy Vermaut, a Belgian human rights activist, emphasising that "working is no longer a guarantee for being able to exist properly" in Europe.

The "yellow vest" protests have engulfed France since November 17 with around 136,000 people having participated in the protests nationwide on December 8, according to France 24 television broadcaster. Meanwhile, the number of those arrested have mounted to over 1,700.

The Stability and Growth Pact and Austerity

The protests were prompted by austerity measures that were adopted in the EU following the global recession of 2008, the human rights activist noted, suggesting that the European bloc had turned into a "super-state" that imposes its will on sovereign nations.

"The European Stability Pact [The Stability and Growth Pact (SGP)] has been pursuing a rigorous austerity policy in Europe for several years", Vermaut explained. "European governments must submit their budgets to the European Commission (EC) before they are discussed in the various parliaments. In it you see that we are already living in the European super-state. The coup d'état that is being imposed on the people has started after many years of austerity policy throughout Europe. There is increasing tension in Europe about this, because this policy is affecting the sovereignty of nation states, which are being held hostage [while living] in this European straitjacket of budget savings and austerity for the people",

© AFP 2021 / Benoit Tessier
Yellow Vests Protest: Macron Was Only Implementing Hollande's Policy - Scholar
According to the activist, there is also a built-in "institutional discrimination" in the system which "divides people internally". He believes that this is particularly the reason why these protests have ended in violence.

Over the years, the social security system has been "scaled down piece by piece throughout Europe", the activist noted. For their part, many European governments capitalise on this state of affairs, trying to antagonise "employees against employers, [blue-collar] workers against white-collar workers", he said.

"Meanwhile, the people remain the government's milk cow, which is imposing more and more taxes, while also reducing public transport everywhere in the periphery and in the countryside", Vermaut underscored. "On the one hand, we argue that we have to do something about climate change, but many feel that this is being used by governments to impose additional taxes and feel that social justice is being undermined".

Commenting on the ongoing protests in France, the activist highlighted that "people come to the streets for a better social climate, for a world where they can make a better future for their children, to still maintain a little bit of quality of life", rejecting Donald Trump's claim that the French took to the streets to protest against the climate agreement.

I am glad that my friend @EmmanuelMacron and the protestors in Paris have agreed with the conclusion I reached two years ago. The Paris Agreement is fatally flawed because it raises the price of energy for responsible countries while whitewashing some of the worst polluters….

According to Vermaut, the "yellow vests" movement differs from the Occupy protests. He pointed out that there are many people among the demonstrators who have never taken to the streets before.

"They feel that their political representatives do not do enough to solve their problems and so a lot of people have the feeling that [these politicians] no longer represent them", he said, adding that "everything can be traced back to a general dissatisfaction with the ever increasing taxes on the incomes of ordinary people".

However, it appears that the French elite have failed to understand the "yellow vests'" message so far, the activist emphasised: "Although a 6-month moratorium on increases in fuel prices [was imposed] in France, the French got only a band-aid" he said, placing emphasis on the necessity of structural reforms.