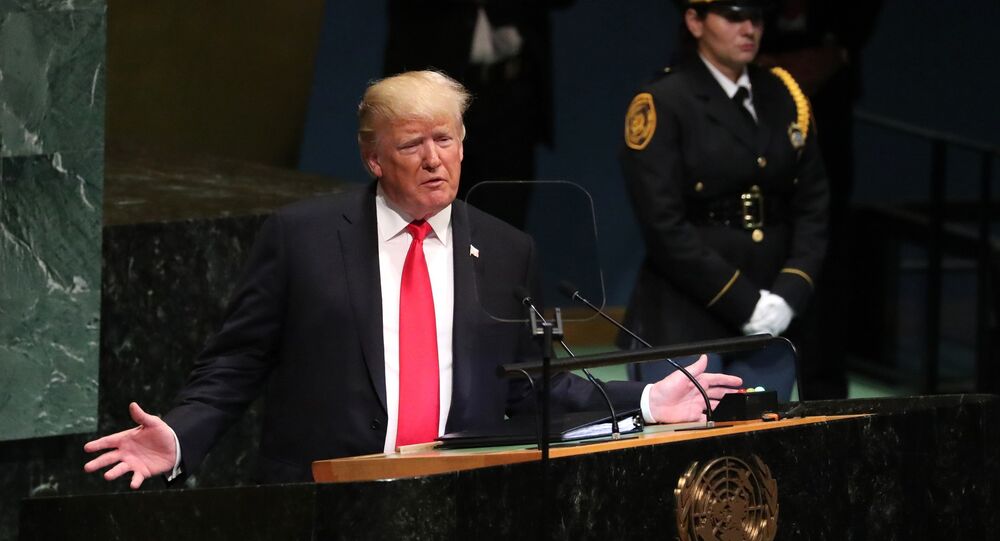 US President Donald Trump doubled down on his America First stance Tuesday while giving his address at the United Nations General Assembly (UNGA) in New York this week, Joe Lombardo, the co-coordinator of the United National Antiwar Coalition, told Sputnik.

Trump urged other nations to reject globalism and focus on embracing patriotism, as the US has done vis-a-vis the president's rhetoric. "That is why America will always choose independence and cooperation over global governance [and] control," he said. "I honor the right of every nation in this room to pursue its own customs, beliefs and traditions."

"The United States will not tell you how to live, work or worship. We only ask that you honor our sovereignty in return."

POTUS said the US would be reviewing its alliances with foreign countries to determine "what is working, what is not working and whether the countries who receive our dollars and our protection also have our interests at heart." He is reportedly willing to reduce US financial aid to the United Nations.

​Lombardo told Radio Sputnik's By Any Means Necessary on Tuesday that Trump offered a "very nationalistic" speech to a world body that is tasked with promoting international cooperation.

"His statements that he's accomplished more than anyone else… his accomplishments are undoing any modicum of progress that has been made in the world," Lombardo told host Sean Blackmon, referring to the US withdrawal from the Paris Climate Accord and Iran Nuclear Deal. "What he did was, instead of looking globally, he gave this very nationalistic speech."

Much of the 34-minute UNGA speech mirrored statements Trump made at his 2017 appearance before the same body, minus the bit where he threatened to "totally destroy" North Korea. This time around, Trump focused his ire on Iran, which he blamed for the Syrian conflict.

"Every solution to the humanitarian crisis in Syria must also include a strategy to address the brutal regime that has fueled and financed it: the corrupt dictatorship in Iran," Trump declared in an apparent battle with the fact that Iran holds elections. "Iran's leaders sow chaos, death and destruction. They do not respect their neighbors or borders or the sovereign rights of nations."

But Trump's running theme of protecting US sovereignty is somewhat startling, considering the US has long been quick to violate other countries' sovereignties for its own benefit, Lombardo said, nodding to the US' presence in Syria and support for the Saudi- and UAE-led coalition in Yemen.

"We have violated and continued to violate the sovereignty of every single country we enter with our military forces, and we have military forces in about 172 countries," he said. "The United States is occupying about a third of Syria — not a very populated area, but it is an area that has oil, and it's a place where the United States intends to stay."

"We do the same thing with Yemen," he said.

"We do this all over the world; Trump just stands reality on his head when he talks like this. He's a bully, and he's using his bully pulpit to say, ‘We demand even more from the rest of the world,'" he added.

Aside from bashing Iran and reiterating America First, Trump criticized Germany for depending on Russian oil and Venezuela for its humanitarian and economic crisis, and he demanded other UN members increase their contributions to the United Nations budget.