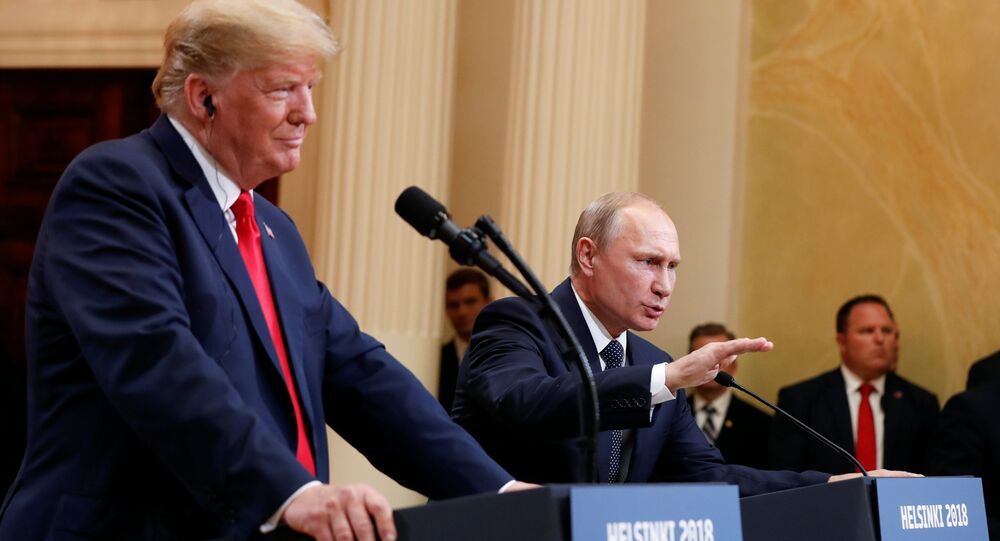 President Donald Trump has got enough guts up to meet with his Russian counterpart Vladimir Putin amid the ongoing media hysteria over his alleged "collusion" with Moscow, Wall Street analyst Charles Ortel told Sputnik, expressing hope for further rapprochement between Russia and the US.

"I truly believe the Helsinki meeting was an outstanding start, but it will certainly take time to deliver progress for the Russian and American people," Charles Ortel, a Wall Street analyst and investigative journalist, told Sputnik.

​When it comes to the potential US-Russia collaboration, the analyst believes that "what will matter most, in the near term, is to select a short list of concrete measures that may yield successes so obvious that even America's hostile and blinkered mainstream press will be forced to grasp that the world must be better off once Russia and the United States actually reset our relationship, for the better."

Trump Faces a Tsunami of Criticism

"The coordinated assault against Donald Trump by reliable and ill-informed allies in the press is almost amusing to watch — the very things for which Barack Obama was praised and perhaps given his undeserved Nobel Peace Prize were criticized when Trump dared to consider President Putin's denial of Russian state-sponsored interference in the 2016 election," Ortel underscored.

© REUTERS / Grigory Dukor
US Media Smears Trump-Putin Talks to Thwart Cooperation With Russia - Analysts
He noted that the very same people who excoriated George W. Bush and others for accepting the intelligence assessments that Saddam Hussein's Iraq had "weapons of mass destruction" are now bashing Donald Trump for questioning the US intelligence agencies' conclusions regarding the alleged Russian interference in 2016.

However, despite the US establishment's ire over Trump's meeting with Putin, "the political landscape has already changed much in America," Ortel said.

"People here are becoming more independent of both parties for many reasons," he noted. "I suspect that a large majority of Americans does want a new state of peaceful, engaged relations with the Russian people. But there are many challenges."

In light of this, it was excellent to see the Helsinki meeting happen, the Wall Street analyst emphasized, expressing hope that "much positive news will follow as the Trump administration engages further with Vladimir Putin's government."

During the joint press conference with his American counterpart Donald Trump, Vladimir Putin singled out Bill Browder, the American-born British financier and CEO of Hermitage Capital Management, once one of the largest foreign investment funds in Russia.

© AP Photo / Remy de la Mauviniere
Bankster Browder Balks at Trump Plan to Let Putin's Tax Inspectors Question Him
"According to our investigative officers, a group of people — Mr. Browder's business partners — who illegally made over $1.5 billion in Russia did not pay taxes either in Russia or the United States but transferred this money to the United States. They contributed $400 million to [Hillary] Clinton's election campaign. This is official information included in their reports — $400 million. Well, it was up to them, they might have done this legally, but the gains were ill-gotten," Vladimir Putin said, adding that Moscow has grounds "to suspect that US intelligence officers supported these illegal transactions."

On July 17, The Russian Prosecutor General's Office specified that the sum sent to Clinton by Browder amounted to $400,000 and signaled its readiness to send official request to the US to initiate an investigation into the case. Browder rushed to deny the accusations in an op-ed for Time magazine.

"It would not surprise me in the slightest to learn that Browder and/or his allies might have funneled substantial sums to the Clintons (and to others) to try to gain protection from prosecution and/or advantages from being connected to Hillary Clinton, had she won in 2016," Ortel, who has been conducting a private investigation into the Clinton Foundation's alleged fraud for the past few years, said.

"One of the ways these sorts of players operate is to run investment funds and nonprofit entities, using one or both as ways to launder money across national boundaries," he highlighted. "I certainly hope that Russia will consider sharing details supporting this claim and that the Trump administration will investigate these details fully and prosecute accordingly."

Trump is Determined to 'Drain the Swamp'

Ortel noted that Trump's decision to change the trajectory of American relations with Russia well before the November 2018 congressional elections and amid the Robert Mueller investigation into the supposed Trump-Russia "collusion" appears to be risky.

"The mainstream press, think-tankers, academia and the Deep State are eager to argue (as they already have again) that President Trump is somehow 'indebted' to Russian interests for his 2016 victory," the analyst said, referring to the alleged Russian interference into the US 2016 presidential race, which was denied by both Moscow and Trump.

Meanwhile, Trump and his team are not sitting on their thumbs. They "have been busy getting control over key parts of the executive branch that are still heavily influenced by Obama/Clinton loyalists and by 'Never-Trumper' Republicans," the investigative journalist highlighted.

"I suspect the Trump Team has made progress investigating malfeasance and that one of the reasons that there now is such a coordinated assault against the President by former CIA head John Brennan, former FBI head James Comey, failed candidate Hillary Clinton and many others is that they fear Donald Trump will soon make good on one promise that excited the electorate and that is to 'Drain the Swamp'," Ortel concluded.