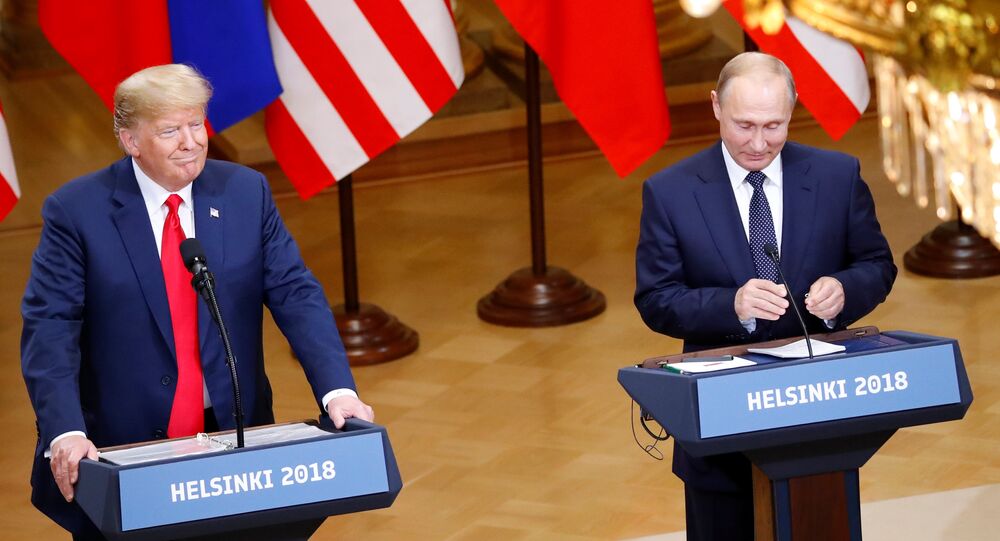 Russian President Vladimir Putin said that there was no reason for Moscow and Washington not to get along after his meeting with Donald Trump in Helsinki, Finland, on Monday. Sputnik discussed the Trump-Putin summit with Scott Bennett, a former US Army officer and counterterrorism analyst.

Sputnik: What's your take on the meeting between President Trump and President Putin? Was it able to achieve concrete results?

Scott Bennett: We're looking, of course, from a military intelligence position and I think it was an absolute victory, I think it was a wonderful success, I think it had tremendous positive reverberations in every direction, and I was really ecstatic because of the chemistry that President Trump and President Putin had. The invitation of President Putin to bring the special counsel, Robert Mueller, and his team over to Russia to do very thorough forensic investigations and questioning of the 12 suspects indicted, which we know would prove there was no collusion, there was no activity, the charges would fall apart, but it's calling of the bluff, and I thought it was a brilliant tactic by President Putin, and I was glad to see President Trump was very supportive of that, and I was very glad to see President Trump and Putin on the same page essentially to say there was no Russian collusion, there was no hacking, this was all a hoax, it was a witch hunt, it was a complete fraud by the Democrats to create this boogie man patriot of the Soviet Union, when we all know the Soviet Union ended, and we have Russia and the Russian Federation, and the Russian Orthodox people in the country, which no one in America has any desire to have a conflict with and no one fears, and I think the World Cup proved that to, so the American people have a desire to have an affection and a relationship with Russia.

READ MORE: Trump on Twitter: 'Putin and I Got Along Well Which Truly Bothered Many Haters'

Sputnik: How much pressure is Trump really under right now when it comes to the issue of Russia at this point in time? Many are saying that he didn't have a meeting with Putin for such a long time because he feared that people would say, "Hey, you're meeting with the guy who put you in office." And now he's saying that he believes that the previous administrations, and there's also quite a lot of noise around that as well, are responsible for the bad relationships — what do you make of this?

© Sputnik / Alexei Nikolsky
'Smells Women's Magazines': Finnish Media Under Fire for Focusing on FLOTUS's Style at Trump-Putin Summit
Scott Bennett: I think you're exactly right, that's precisely why President Trump could not meet with President Putin, he could not appear as favorable and hopeful as he campaigned on, he couldn't do any of that because the Democrats had positioned him with this Obama administration fake Russian hacking, fake Russian meddling charge, and he couldn't make a move because then they would've pounced all over him and said, "You see, you see, he really is a Russian spy. Impeach him, impeach him!" But that's no longer there and I think President Putin did a wonderful job by exposing the fact that $400 million was stolen from Russia by (Bill) Browder and the Hermitage Capital group that he ran and given to Hillary Clinton's campaign; that's criminal, it's campaign finance illegalities, and that needs to be prosecuted and it was wonderful that President Putin brought that to the attention of the American people.

Sputnik: Twelve Russians were indicted recently, we had the arrest also of a Russian woman who was accused of spying, what do you make of that? And that was Mueller who indited those 12 Russians.

Scott Bennett: Yes, he did it the day after Peter Strzok testified, so it was a distraction operation; they've been planning that for a while, they did it just on the eve of the Russian summit with President Trump and Putin in Helsinki; so it was a deception operation, it was intended to pull the American people away from looking at the summit and to try, once again, and invent this false narrative that 12 Russians had been indicted for espionage purposes essentially, but I think when President Putin invited to bring the law enforcement agencies and the Mueller investigation to Russia to question them to their hearts' content and work with  Russia, according to the 1990 treaty for criminal acts and criminal intelligence exchanges, that was a great countermove, but Rod Rosenstein and Peter Strzok, and the FBI, and the Department of Justice had been caught red-handedly in this fabulous deception dating back to 2015, and then carrying through to 2016 all the way through the election.

We see the British were up to their neck in this with the GCHQ secret memos that describe on August 28, 2016, President Obama requesting that President Trump's Trump Tower be surveyed and be listened to and be observed for intelligence violations, that's in the British memo, and it's very powerful because it shows President Obama was lying and that Susan Rice actually requested the British to continue surveillance on Trump on August 28, 2016, so Rosenstein‘s indictment of 12 Russians is absolutely false, it's fake, it's probably going to fall apart, as the other cases have, and the Russians need to form an aggressive defense and challenge everything, challenge the whole deep state, because their agenda is to try and impeach Trump with this fabulous lie and keep Americans in the dark, on their toes, unknowing, keep them scared, keep them fearful, make them think Russia is going to invade Alaska, and that the Soviet Union and communism never did go away, and that it's going to rise up and conquer America. That's the propaganda, that's the fear, that's the deception, but it's like putting seed on cement, it's not going to take root, the American public's hearts and minds are not receptive to that, they don't believe it, they have no natural disliking of Russia and that's why you had people voting for him.