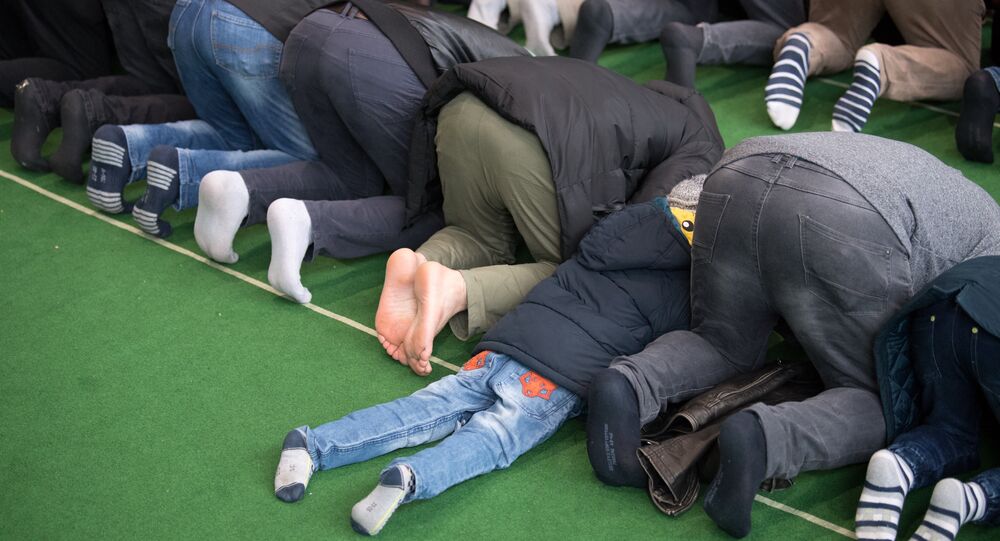 Historian: Difficulty Is to Make Distinction Between Islamists and Muslims

European citizens appear to be more accepting of Jewish people than Muslims. This is what a recent survey conducted by Pew Research Center has suggested. The center asked respondents from fifteen European countries whether they would rather have a Muslim family member of a Jewish one.

Sputnik discussed this with Dr. Gunther Jikeli, a historian at Indiana University's Institute for the Study of Contemporary Antisemitism.

Sputnik: The poll shows that the general trend is that Jewish population is more accepted than Muslims. How could you account for this fact?

On the other hand, with Muslims, I think that because many people mix that up, they see terrorist attacks by people who claim to do that in the name of Islam, all these terrorists shouting "Allahu Akbar!" when they kill people, so people see that in the news and some don't know how to make this distinction between Islamists, radical, violent Islamists, terrorists, and ordinary Muslims who really don't have the same attitude and don't want to perpetrate any attacks, so this is a real threat that doesn't exist [among Jews].

There's no Jewish movement or sect that has turned that violent. So there is something that people are afraid of, and it's now the difficulty to make this distinction between Islamists and Muslims in general.

Sputnik: There's a lot being written currently about the fact that the level of anti-Semitism in Europe is unprecedentedly high since World War II, would you agree with this?

© AFP 2020 / SAKIS MITROLIDIS
Not All in the Family? Almost Half of Western Europeans Find Islam 'Incompatible' With Their Values – Poll
Dr. Gunther Jikeli: Yes, but it's a complicated picture because this attitude, as in the survey, shows that only a fraction of the people want to exclude Jews from their families or work space, they don't want to have Jews as neighbors, but then there's a rise of anti-Semitic attacks, so it's a little bit puzzling, and also what many Jewish communities experience, they're tiny minorities compared to the Muslim minorities in the European countries, so the average person in Germany, France rarely meets a Jewish person, but still there are a lot of stereotypes.

But Jewish people say that there is an increase of this threat, on the streets they get attacked, but also in everyday communications people more openly voice anti-Semitic attitudes, that's something apparently new.

Sputnik: Stereotypes are something that it's very difficult to dislodge, to fight against, what could be done?

Dr. Gunther Jikeli: I think the education system has to come in and make it clear that regardless of background, religious, ethnic background all people have to be treated equally, this kind of things, and also politicians have to make a clear message, and if you look at the everyday lives of ordinary people, in many families there is already a mixture.

In my family, I don't have any Jewish family members, but I have two or three Muslim family members and nobody is concerned about that. So in everyday life, people experience that there is no problem really, but in the ideas, there are often problems, and of course, we have these Islamist organizations that are influential in all European countries.

Muslim Brotherhood is a political organization that tries to push more an agenda and they also do occasional programs, and often they get even subsidies by governments and this, of course, has to be stopped.

Sputnik: Stereotypes and sentiments of this kind sometimes are just born on the street, at school, across the social media, so I'm guessing it has to be an across the border effort to fight all of this, do we know any countries that have been successful in doing this?

© AP Photo / Office of the Iranian Supreme Leader
'Made in Iran': Islamic Republic Sets Ambitious Goals to Battle Foreign Imports
Dr. Gunther Jikeli: I think what is a good point is that in most countries the governments are aware that this is a problem, and it's not only a problem for the minorities, it's really a problem of social cohesion, so they realize that they have to do something to avoid major conflicts. If it stays on the level of attitudes that's not good, but if people don't take action on that you can still handle that, but, of course, if there are crises then attitudes can be transferred into actions, so I think most governments are aware of this, so what the German government is trying to do is they have a governmental position for somebody who tries to coordinate the combat against anti-Semitism.

He tries to see what needs to be done, so first of all, it was a few months ago when this new position was created. He wants to register all the anti-Semitic incidents centrally. That's the first step; if we don't have any data, reliable data, on this kind of hate crimes, then how can you know what the situation is.