While the Indian government has chosen the "wait and see" approach to the Syrian crisis, Indian experts who have been closely following the developments in West Asia have opined that Syria has become a playground of the West as the US has a deep interest in the region due to its oil resources.

New Delhi (Sputnik): India has deplored the alleged use of chemical weapons by the Syrian forces in Douma purportedly killing 70 people while calling for restraint on the part of the international community in punishing the Damascus authorities for the alleged crime that is yet to be verified. An Indian expert on West Asia has opined that the haste with which the US and its allies launched airstrikes on Syria without ascertaining the facts warrants conjecture that the US just needed a pretext to attack Syria.

READ MORE: The West's Missile Strike on Syria: an Act of Raw Imperialism

"What India and Russia have said is that before taking any decision, the US and its allies should have waited for the outcome of the investigation by the Organization for the Prohibition of Chemical Weapons. It is yet not clear whether Assad's forces have used chemical weapons or not. Nevertheless, the actions by the US and its allies confirm the theory that western powers want to increase their hegemony in the Middle East and Assad is the only main opposition, therefore the US desperately wants regime change in Syria," Qamar Agha, a leading scholar on West Asia told Sputnik. 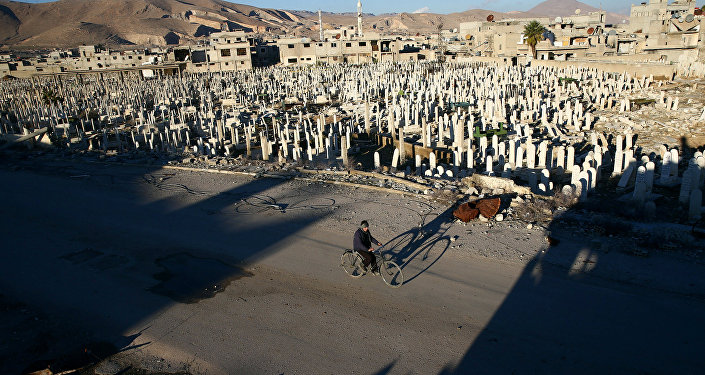 "Russia is closely monitoring the evolving situation in Syria and has also warned the US-led forces about the repercussions. Further, I have an optimistic view of the Russian statement that most of the US-led missiles could not complete their mission and they were countered mid-air. Russia is cautiously watching the situation and if things go beyond a certain limit then Russia will also act decisively," former Indian Foreign Secretary Shashank told Sputnik.

The Indian government has called for an impartial and objective investigation by the Organization for the Prohibition of Chemical Weapons (OPCW) into the alleged chemical attack.

"In the meantime, we urge all parties to show restraint and to avoid any further escalation in the situation. The matter should be resolved through dialogue and negotiations, and on the basis of principles of the UN Charter and in accordance with international law. We hope that the long drawn out suffering of the people of Syria will come to an end soon," Ministry of External Affairs Spokesperson Raveesh Kumar said while briefing the media over the weekend.

Damascus to Welcome India's Participation in Post-War Reconstruction of Syria