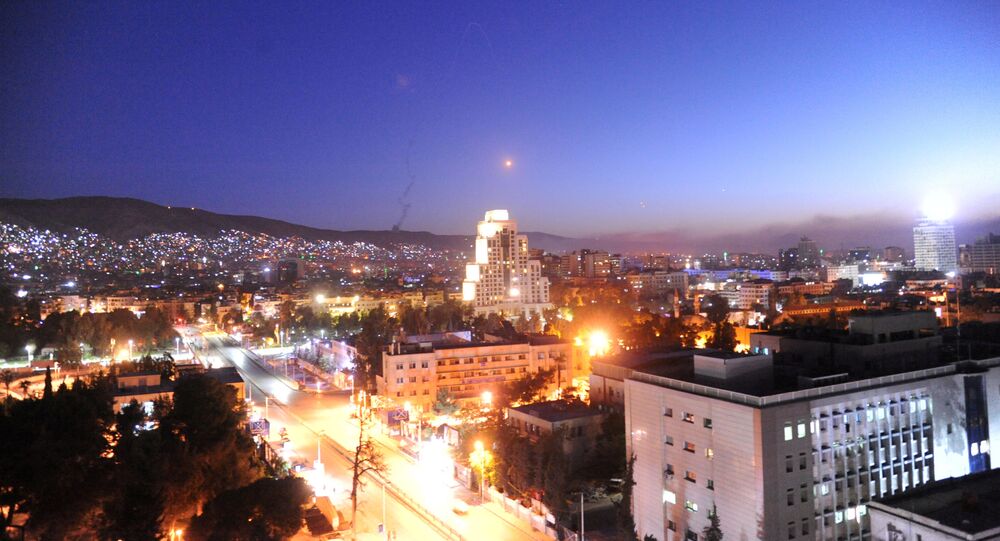 “Crimes pile up until they become invisible” - When playwright Bertolt Brecht made this observation it was the era of fascism and European colonialism in the 1930s. The world was separated between states privileged by the dint of their power to speak, and the states forced to listen and obey. It was an epoch that culminated in World War II.

Lamentably, today, the 1930s are back and the crimes are once again piling up – so many they are in danger of becoming invisible. Yugoslavia, Afghanistan, Iraq, Libya, Yemen, Syria, the charge sheet grows ever longer with no end yet in sight; the latest chapter in this dismal story arriving with the illegal missile strike unleashed against Syria by the US, UK, and France over an alleged chemical weapons attack carried out in Douma on the outskirts of Damascus by Syrian government forces.

I say alleged because at time of writing OPCW inspectors are yet to undertake an on-site investigation to ascertain if such an attack did in fact occur and, if so, with what precise chemical weapon or substance used.

So here we have a situation where not only was this military action illegal under international law, it was undertaken before OPCW inspectors could begin their investigation, as per the existing and established international protocols which are set out in the Chemical Weapons Convention.

11. Pursuant to a request for a challenge inspection of a facility or location, and in accordance with the procedures provided for in the Verification Annex, the inspected State Party shall have:

a) The right and the obligation to make every reasonable effort to demonstrate its compliance with this Convention and, to this end, to enable the inspection team to fulfil its mandate;

I, for one, am long past the stage of believing that the world is divided between goodies and baddies, with the country I happen to live in, the UK, on the side of the goodies, along with the United States and various countries that come under the rubric: the West. It’s not as easy you think to arrive at this understanding, not when from cradle to grave people in the West are conditioned by the media, culture industry, and political elites to believe that a metaphorical Hadrian’s Wall separates us, the nice civilized people, from the bad barbaric people on the other side.

The end result is acts of raw aggression such as the one unleashed against Syria over the alleged chemical weapons attack in Douma, dressed up as ever in the threadbare clothes of humanitarian intervention.

On this occasion, as with ever other occasion when it comes to these chemical weapons attacks, the video footage and other visual evidence used to make the case for the prosecution emanated exclusively from opposition sources within Douma itself — in particular the notorious White Helmets civil defence organization, established by former British army officer and private military contractor James Le Mesurier.

Though for some perhaps these are mere trifling details, but that this organization operates exclusively in opposition held Syrian territory and is funded by Western governments, isn’t this sufficient reason to at least try to resist suspension of disbelief?

Other pro-opposition organizations involved in shaping the narrative on this latest alleged chemical weapons attack have been the Syrian Observatory for Human Rights, based in the UK, and the Syrian American Medical Society. On the latter of these, the Syrian American Medical Society, here’s US author and commentator Max Blumenthal: “SAMS is not merely a group of Syrian doctors tending to the wounded in war torn areas, nor can it be considered an objective source on chemical attacks and other atrocities. The organization is a USAID-funded lobbying powerhouse that functions with a single-minded determination to stimulate a US-led war of regime change that will place Syrian Islamists in power in Damascus.”

None of the details, information or footage of the attack derived from an independent or credible source – not difficult to understand why when no Western journalist or news crew would dare set foot in any part of the country controlled by the ‘rebels’, knowing that as soon as they did they’d be abducted and murdered.

© REUTERS / Simon Dawson
Syria Strikes 'Right Thing to Do': UK PM May-Parliament Heated Face Off
Veteran Middle East correspondent Robert Fisk is someone who knows what the Syrian government and its people are up against. Writing in the aftermath of the military attack mounted by the US and its allies, he informs us that in the suburbs of Damascus it was not only Ghouta where jihadi militants were entrenched. There is another suburb of the Syrian capital where Salafi-jihadi militants have managed to retain a presence. In this instance it is Daesh, and at time of writing Syrian troops are gathering there to engage in their next operation to secure the capital.

Fisk informs us that on the 27th of March 116 Syrian soldiers were surrounded and captured here in a Daesh ambush, having strayed into the area in the mistaken belief that a ceasefire was in place and it was safe. Subsequently, the soldiers were taken away and executed — some were shot and some were beheaded. In the by now accustomed manner, the grisly event was caught on film.

The point that needs to be made is that this base barbarism, rife throughout Syria over these past seven years, did not take place in a desert somewhere. No, it occurred in 2018 on the outskirts of a major capital city in the Middle East. Imagine for a moment if it was taking place on the outskirts of London or Washington or Paris. Just imagine.

Or can’t you? Can’t you imagine it? Are you unable to grasp the sheer horror of having on your doorstep the kind of people for whom there is no constraint, no limit when it comes to wanton murder and massacre?

© AFP 2021 / Bart Maat / ANP
New US Strikes in Syria Will Provoke a Tougher Response - Moscow
It is precisely because we cannot imagine it that the outrageous moral equivalence made between a secular non-sectarian government, supported by an army whose soldiers are drawn from every part of Syria’s religious and cultural mosaic, and brutal sectarian butchers intent on genocide, has been allowed to pass muster in the West.

It has led us to the criminal folly of the US, UK and France refusing to align themselves with the people who’ve been on the receiving end of this sectarian barbarism in Syria, choosing instead to effectively join forces with the barbarians of al-Qaeda, Daesh, Nusra, and Jaish al-Islam.

It is tantamount to entering a pact with hell.