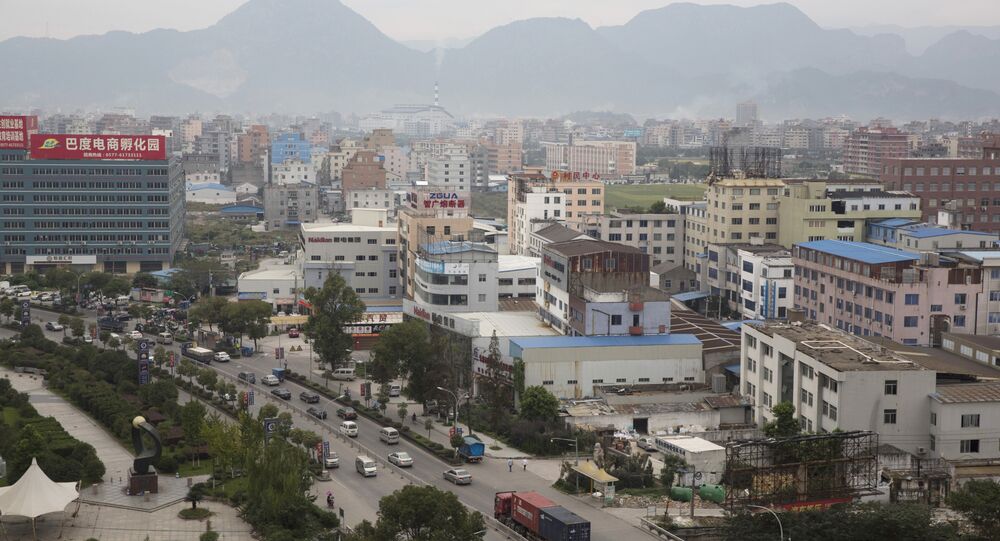 MOSCOW (Sputnik), Tommy Yang - Chinese President Xi Jinping’s promise to open up the domestic market further and increase imports by lowering tariffs is not a sign that Beijing is conceding amid escalating trade tensions with the United States, experts told Sputnik.

During his keynote speech at the opening ceremony of the Boao Forum for Asia in China's province of Hainan on Tuesday morning, Xi pledged to implement a series of measures that would allow greater access to the country's market for foreign investors and boost imports voluntarily to improve China’s trade balances.

The new Chinese policies include easing market entry standards, especially for the financial sector, strengthening intellectual property rights protection and lowering tariffs on products such as automobiles. These new measures seem to address the exact complaints the United State has regarding China’s "unfair" trade practices.

© REUTERS / Joseph Campbell
China Bans Export of Materials That Could be Used in DPRK Weapons of Mass Destruction
However, China’s pledges to open up its domestic market further should not be interpreted as Beijing waving the white flag before a prospective trade war with the United States even gets started, experts argued.

"This [the new measures] is indeed a response to the US demands amid the ongoing trade tensions between the two countries. But it’s not entirely triggered by US pressure. [Xi's top economic adviser] Liu He already mentioned at the World Economic Forum in Davos in January that China was going to unveil new opening-up measures that are ‘beyond expectations.’ Chinese economists have always called for further opening up of the domestic market, which would be beneficial to the nation’s economy. It’s not about China conceding in a trade war," Deng Yuwen, a senior researcher at the Charhar Institute Beijing, said.

The Beijing-based expert believed that China could exclude the United States from the new policies if Washington continued to escalate trade tensions.

"The new measures are not contradictory with previous tough comments from Chinese authorities on trade tensions with the United States. After the new policies go into effect, the United States still makes excessive demands on trade, China would have to fight until the end. If China is in a trade war against the United States, the improved market access will not be available to US companies," Deng noted.

© REUTERS / Bobby Yip
When Size Matters: China to Open World’s Longest Bridge (PHOTOS)
When Xi first took office in late 2012, some Chinese political analysts had high hopes of him becoming a reform-minded politician who could bring fundamental changes to the country both politically and economically. However, reforms were not on the top of Xi’s agenda during his first five years in office, as the Chinese leader focused on consolidating power through an extensive anti-corruption campaign.

After boosting his grip on power further by removing presidential term limits in the Chinese constitution during the recent National People’s Congress, Xi could be ready to introduce more economic reforms in China, Deng suggested.

"Political reform in China is impossible. But there’s still a lot of room for economic reform in China. Historically, China’s reforms were always led by opening up, which usually happened under external pressure. After the domestic market opens further, it could help boost additional reforms. After spending his first five years in office focusing on anti-corruption efforts, Xi finally has the energy to pay more attention to reforms. I believe there will be more reform policies this year," he said.

Some experts expressed skepticism over China’s pledges to allow greater market access and reduce tariffs, stressing that similar promises in the past were never fulfilled.

"The biggest issue is whether or not China actually decides to do what it promised to do. The EU Chamber of Commerce used the perfect term, ‘promise fatigue,' to describe the situation. The issue is none of this [the promises] have been followed through for quite some time. It invites criticism," Christopher Balding, an associate professor of business and economics at the Peking University HSBC Business School in Shenzhen, told Sputnik.

The professor pointed out that despite the fact Visa and MasterCard were promised market access after China joined the World Trade Organization in 2000, US financial services have still not received a license to do business in the Chinese market.

© AFP 2021 / PAUL J. RICHARDS
US Treasury Secretary: There is Potential For US Trade War With China
If China could indeed take concrete actions in improving market access for foreign enterprises, it could help make Chinese companies more competitive in the global market, Balding explained.

The Shenzhen-based scholar added that lower tariffs could also benefit Chinese consumers, who have always had to pay more under current tariff schemes.

"Let’s take a Mercedes car as an example. Let’s assume an imported Mercedes costs about 100,000 RMB [$16,000], it would sell for 125,000 RMB in the Chinese market because of tariffs. The same model of Mercedes produced by a local joint-venture in China would sell for 120,000 RMB, the tariffs allowed the domestically produced Mercedes to be priced this high. All you’re doing with [existing] tariffs is hurting your own consumers," Balding said.

However, the expert believed Beijing was unlikely to introduce fundamental tariff reforms that would cut prices for Chinese consumers on a wide range of products, especially consumer electronics that were made in China like the iPhone.

The views and opinions expressed by Tommy Yang are those of the speaker and do not necessarily reflect those of Sputnik.