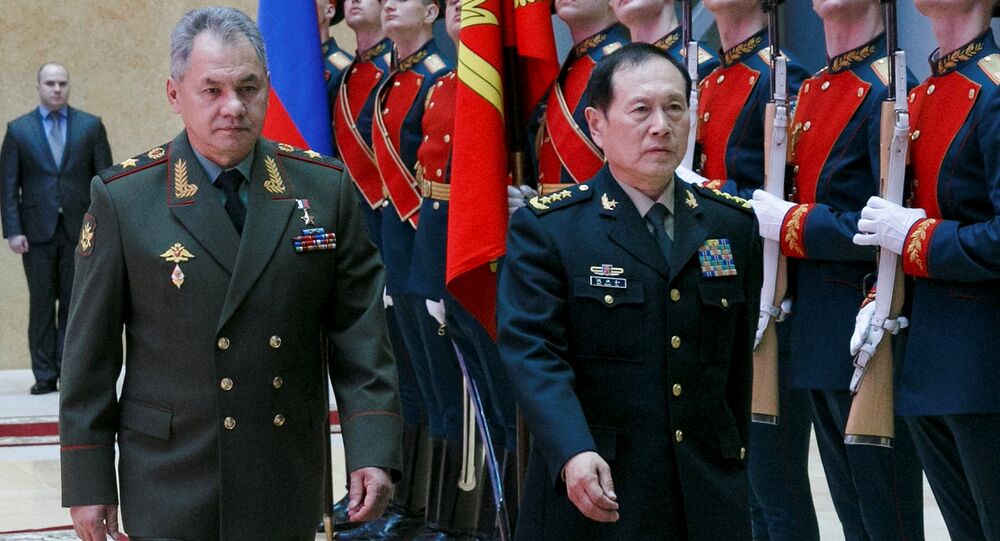 Chinese Defense Minister Wei Fenghe is wrapping up his five-day trip to Russia, which has included his participation at the VII Moscow Conference on International Security. Speaking to Sputnik, international politics observers outlined what factors motivated General Wei's visit, and what's at stake for global security.

Wei kicked off his Russia visit on April 1, and is set to fly back to China on Thursday following the second day of the Moscow security conference. Wei's closed-door discussions with his Russian counterparts are believed to have included the North Korean nuclear issue, along with the formation of a joint Russian-Chinese response to the US strategy openly classifying the two powers as America's adversaries.

Stepping into office last month, Wei did not shy away from revealing the purpose of his trip, saying it was a "signal" to Washington about the "close ties between the armed forces of China and Russia, especially in this situation."

Dr. Wu Enyuan, director of the Institute of Russian, Eastern European & Central Asian Studies at the Chinese Academy of Social Sciences, believes that the Chinese defense minister's visit was aimed first and foremost at demonstrating Beijing's solidarity with Moscow amid the current anti-Russian frenzy in the West.

"Taking into account the current international situation and the collective attack by the West against Russia, I believe that China, as a major power, is demonstrating a well-defined stance," the academic said, speaking to Sputnik. "Specifically, China's position states that until a detailed investigation [into the Skripal poisoning case] is carried out and until all circumstances are clarified, it is inappropriate to classify Russia as a criminal actor. Furthermore, such collective antagonism is a rare phenomenon for the international community; this is the path to returning to the Cold War, something China rejects," he added.

© AFP 2021 / Jung Yeon-je
Beijing Approves N Korea’s Demands for Security in Exchange for Denuclearization
For his part, Maj. Gen (ret.) Pavel Zolotarev, director of the Military-Political Studies at the Moscow-based Institute of the US & Canada says there were several key topics, including the North Korean nuclear issue, which were likely discussed during Wei's visit to Russia.

According to the analyst, Washington faces a difficult situation on the North Korea issue, since Pyongyang already believes it has achieved the goals of its nuclear and missile programs, and is now ready to make overtures toward Seoul to improve relations. This worries the US, according to the analyst, and Washington has found itself without the ability to coordinate with China on the issue.

Two other important subjects which were almost certain to come up during Wei's talks with his Russian counterparts were the US defense strategy and nuclear security, Zolotarev said.

"The US has designated China and Russia as the key challenge to Washington in its doctrinal documents. They have detailed their claims against Beijing in the Indo-Pacific region. The Americans are trying to increase their potential to project power in the region to contain China. This, naturally, is not an issue where Russia can remain indifferent. Here, to some extent, Russian and Chinese interests coincide."

© REUTERS / Peter Nicholls
China Urges to Drop Cold War Mentality Amid Skripal Case – Foreign Ministry
Vladimir Yevseyev, military analyst and deputy director of the CIS Institute, believes that it is noteworthy that Wei's trip to Russia comes at a time when the West is turning up the pressure against Moscow, while Washington is provoking China into a trade war.

"In conditions of a trade war between China and the US, and growing US military pressure on Beijing in the Asia Pacific region, Wei's decision to make Russia the first country he would visit as defense minister is absolutely natural," Yevseyev said. "In many respects, Russia and China are facing common threats, and are ready for joint action," the analyst added.

According to Yevseyev, Russia and China enjoy many opportunities for expanding their military cooperation, including anti-missile defense, military issues in space, and the creation of new hypersonic missile systems.

Ultimately, Yevseyev noted that continued Russian-Chinese cooperation in the defense sphere "is a guarantee allowing both countries to continue to pursue an independent foreign policy in the face of growing external pressure."

US Plays Hard Ball With Russia, China to Try to Revive Its Clout – Analysts

N Korea Has to Rely on Russia, China on How to Handle Talks With Trump - Analyst