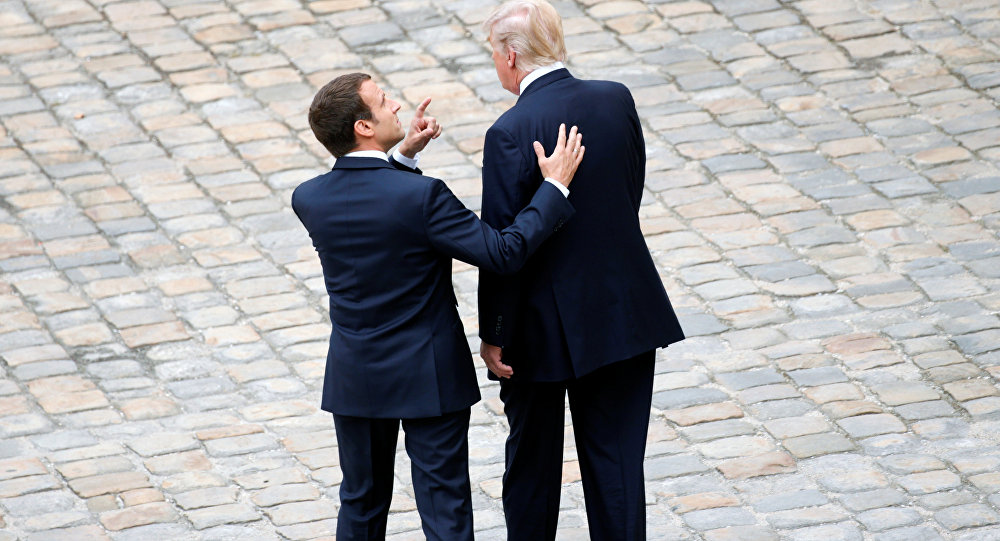 President Trump has said that the US would leave Syria "like, very soon," seeming to catch his own officials from the Pentagon and State Department off guard. Ilter Turan, professor of international relations at Turkey's Istanbul Bilgi University, spoke to Sputnik about the implications of Trump's remarks, and of his recent political appointments.

At a rally in Ohio on Thursday, Trump boasted that the US was "knocking the hell out of ISIS*," and repeated several times that US forces would be "coming out" of Syria "very soon" and letting "other people take care of it." An estimated 2,000 US troops are currently stationed in the country, operating alongside the majority Kurdish Syrian Democratic forces in the country's north and east. Meanwhile, French media reported Thursday that the country's troops will be sent to the Syrian city of Manbij to assist Kurdish militants against Turkey's ongoing Operation Olive Branch offensive.

Speaking to Radio Sputnik, Dr. Turan said that Trump's remarks must be taken with a grain of salt.

Sputnik: This is not the first time the US has promised to remove its forces from Syria. Do you think it's likely that they will actually leave?

Ilter Turan: Under normal circumstances, what an American president says would be taken seriously. Except there are already indications that this was not a carefully prepared remark. It seems that Mr. Trump said this without a carefully planned exit [strategy] from Syria.

Even when carefully prepared statements were made by Mr. Obama with regards to getting out of Iraq, we should remember that he actually failed to get his forces out of Iraq. So I think Mr. Trump's comment may be well-intended, but it does not allow us to immediately judge that the United States will be leaving Syria very soon.

Sputnik: How long do you believe the US will remain in Syria?

Ilter Turan: The American presence in Syria has been going on for some time. It escalated over time, and the Americans professed some goals that they wanted to achieve. This includes of course the eradication of the Islamic State, but people have also said that the more comprehensive reason that the Americans are present in Syria is to arrest the projection of power by Iran toward the West.

So it seems to be a rather difficult question to answer. I think the indications by other agencies than the president himself suggest that this is going to be a long-term process.

Sputnik: Perhaps this is a statement that was made to appeal to Trump's voter base? Do you think it should be seen in the context of the upcoming 2018 midterm elections?

Ilter Turan: The interesting thing is that in recent times, I was not aware of Syria constituting an important issue of contention in American elections. There have been a number of domestic questions, but with regards to foreign policy, trade restrictions and immigration, etc. have been in the forefront of the debate, rather than the American involvement in Syria. So from that perspective this is really unusual.

© AP Photo / Khalid Mohammed
In this Monday, Nov. 6, 2017 photo, U.S. Marines prepare to build a military site during a sandstorm in western Anbar, Iraq. The US-led coalition's newest outpost in the fight against the Islamic State group is in this dusty corner of western Iraq near the border with Syria where several hundred American Marines operate close to the battlefront, a key factor in the recent series of swift victories against the extremists.

Sputnik: In light of Mike Pompeo being selected by Trump as his new secretary of state, do you think it's likely that US foreign policy in Syria is going to change anytime in the near future?

Ilter Turan: My anticipation, if these remarks were basically made on the spur of the moment, would be that the American establishment will gradually persuade the president to suggest that his comments were well-meant, but there were still many things to be done, so that 'very soon' would be 'very soon after all these goals have been achieved' or something like that. I don't anticipate significant changes right away.

Sputnik: What about John Bolton's choice as Trump's national security advisor, and the concerns that have been voiced about his appointment?

Ilter Turan: Bolton has rather hawkish views; he would have significant difficulty in getting along with the rest of the Trump appointees. So his appointment may not last that long. It seems that the circulation of people, the attrition rate among them in the Trump administration is very high; it wouldn't be surprising if Mr. Bolton might not stay there as long as people think he will.

Sputnik: At the same time that we have this statement by Donald Trump, we also have this increased interest by France to get involved in the Syrian conflict. What do you make of that?

Ilter Turan: I'm sort of curious as to why France seems to be so interested in interfering in many places in the world. They have been very active in parts of Africa, as you know. They were present in Lebanon. And now they want to be present in Syria.

I have a feeling that the French might be operating under a number of different motives; one of them is that France would like to see itself as a major power, and is willing to use military power. Another thing we're not particularly sure about is whether Mr. Macron and Mr. Trump reached some understandings in their phone conversations, because it seems that Mr. Macron is one of those rare European leaders that seems to have hit it off with Mr. Trump reasonably well, and they communicate. So they may have reached an agreement whereby France may be assuming more responsibilities [in Syria], allowing the United States to reduce its responsibilities.

*Also known as Daesh, a terrorist group banned in Russia.

The views and opinions expressed by Ilter Turan are those of the expert and do not necessarily reflect those of Sputnik.