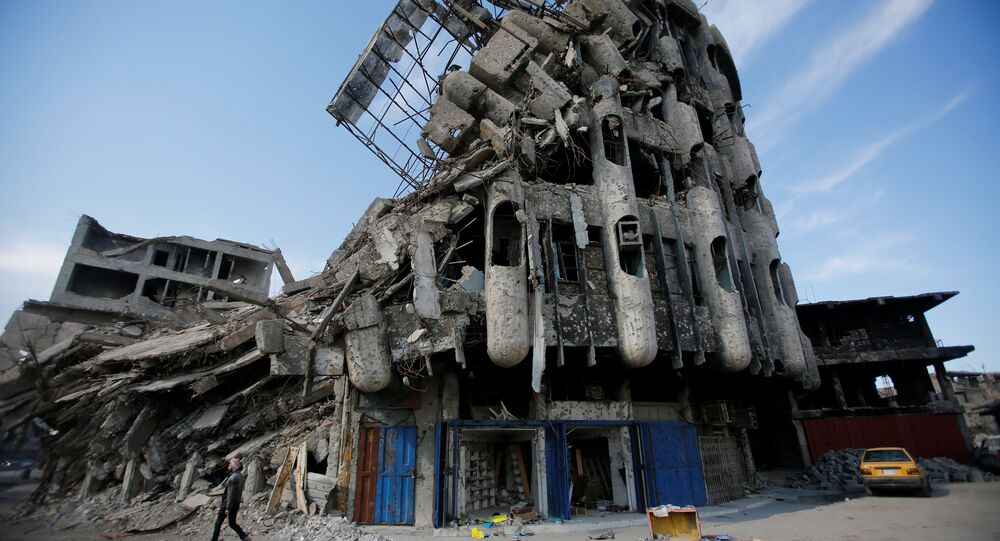 The newly released Ruptly footage of the Iraqi city of Mosul shows the devastation left by the US aerial campaign in the city. Speaking to Radio Sputnik, Thomas G. Weiss, distinguished scholar of international relations and global governance with special expertise in the politics of the United Nations, commented on the situation in Iraq.

Sputnik: Can you tell us about the mainstream media's approach to the coverage of the devastation in Mosul. Has it been adequate?

Thomas G. Weiss: The coverage of many issues these days is inadequate, there are simply too many being covered and this is a minimal problem in the view of the most American citizens who are now preoccupied with the chaos of the Trump administration including, perhaps, a government shutdown tomorrow evening. So Mosul, it's important, obviously, to people in Mosul, it's important to those of us who study war and peace but it is not a priority in the media.

Sputnik: From your point of view what exactly is the situation in Mosul and how severe is the damage? It is Iraq's second largest city. We know that numerous civilians have been killed and injured and the city has been pretty much destroyed. The Iraqi government said it would take a hundred billion dollars to get the city just to function.

Thomas G. Weiss: That's right, and there is nothing like that on the table, I mean, the new aid announced was a couple of hundred million dollars, not "billion" dollars and it does not strike me that this is necessarily the moment to try to invest in reconstruction in the country and in the city still pretty much at war.

Sputnik: The question is how much of that money actually gets to the designated recipients.

Thomas G. Weiss: Yes, anyone who works in a war-torn societies whether it is a humanitarian aid worker, subsequently post-conflict reconstruction worker, development worker is aware of the kinds of parallel markets, shall we say, whether this is in Iraq or Syria, the waste, the taxation they have access [to] and the kinds of low- and high-level corruption are endemic, this is nothing new anywhere.

READ MORE: US Aimed to Destroy Rather Than Liberate Iraq's Mosul

Thomas G. Weiss: In looking at the numbers and looking at the territory controlled etc., one would have to say that the coalition's — more or less the United States' — strategy has been modestly successful and taming the beast but the beast has now spread elsewhere, so this is certainly not over despite the president's depiction of it having been a victory — we've heard lots about slam-dunks in the area. This rarely is the case and it's certainly not the case in Mosul.

Since 1998 Thomas G. Weiss has been Presidential Professor at The Graduate Center, CUNY (The City University of New York), and is Director Emeritus of the Ralph Bunche Institute for International Studies.

The views and opinions expressed by Thomas G. Weiss are those of the speaker and do not necessarily reflect those of Sputnik.

Brexit Worse Than the Iraq War? Only if You Forget the 1M Dead