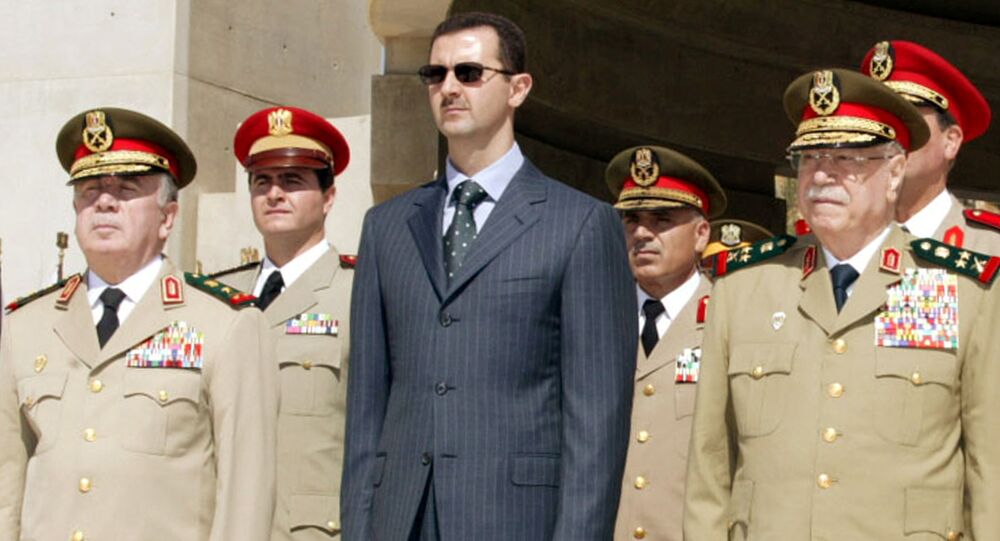 The Syrian Army’s combat victories have confirmed President Bashar Assad’s hold on power and it is laughable to think President Donald Trump or the United States can do anything about it, former US Ambassador to Saudi Arabia Chas Freeman told Sputnik.

WASHINGTON (Sputnik) — The Trump administration is allegedly prepared to accept Assad’s continued rule until Syria’s next scheduled presidential election in 2021, New Yorker magazine reported earlier this week, citing US and European officials. The State Department on Tuesday, however, refuted these reports and said that the United States believes that the future of Syria will not include Assad.

"It's a bit of a joke to premise… the thesis that it is up to Trump, or the United States, to decide who rules Syria," former US Ambassador to Saudi Arabia Chas Freeman said on Wednesday. "It seems to me that those who brought Assad his victory against the forces that shed so much blood to dislodge him have decided that."

© Sputnik / Mikhail Klimentyev
Vladimir Putin's Surprise Visit to Hmeymim Airbase Amid Victory Over Daesh
14
Freeman said US policymakers and pundits were deceiving themselves if they imagined that they could choose or significantly influence who would lead Syria in the coming years following the end of the six-year civil war that has killed an estimated 600,000 people.

The conflict in Syria had inflicted unprecedented destruction on the country’s infrastructure and suffering of its people, and generated several million refugees, Freeman added.

"Syria has been maimed, but not slain by the civil war that others, including the United States, fueled on its territory," Freeman said.

© Sputnik / Michael Klimentyev
Russian Military Operation in Syria Reached End Goal - Kremlin
On December 6, Russian President Vladimir Putin said that Daesh terrorist group had been defeated on both banks of the Euphrates river in Syria. On Monday, Putin ordered a partial withdrawal of Russian forces from the country, about two years after the Syria campaign started at the request of Assad.

Chas Freeman is a lifetime director of the Atlantic Council and served as Deputy Chief of Mission and Chargé d’affaires at the US embassies in Beijing and Bangkok. Freeman also held several senior level positions at the Defense Department.

The views and opinions expressed by Chas Freeman are those of the speaker and do not necessarily reflect those of Sputnik.