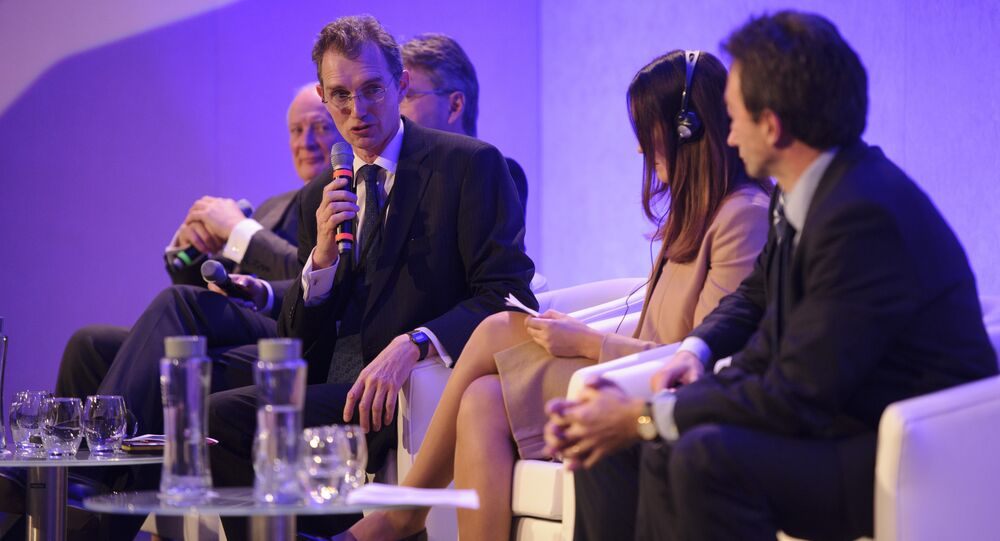 David Davies, a Conservative MP, spoke to Sputnik about the opportunities Brexit offers to Britain and why the UK government should be trying to increase trade with Russia.

Mr. Davies was the moderator of a plenary session at the Russian-British Business Forum in London on Wednesday, November 29. Afterwards Mr. Davies, who is also chairman of the Welsh Affairs Select Committee, spoke to Sputnik about Brexit, sanctions and anti-Russian "hysteria" in the UK, US and European media.

Sputnik: Why have you come to this event today?

David Davies: I will tell you why I didn't come. I haven't been offered any money or blandishments. I am interested in our relationship with Russia from the point of view of somebody who thinks that post-Brexit we need to develop as many trade relationships with as many places as possible. I have no ulterior, hidden or financial motives for it and I am rather irritated that as a result of the hysteria about any sort of contact with Russia that I was branded by some Czech think tank as being one of Putin's propagandists. This is absolutely ludicrous and I am almost going to make a point now of taking the opportunity to come to events like this because I think that sort of singling out or victimization of people who appear on a TV channel is dangerous and wrong. I think there is hysteria. Clearly RT has its own agenda. Many other channels do. The BBC certainly had its own agenda as far as Brexit was concerned. There is no doubt about that. I appear on TV channels as part of my role and I don't discriminate against any of them.

Sputnik: You were very pro-Brexit? Did your constituents vote overwhelmingly for it?

David Davies: No. They were split… they were probably about 50/50. But since then we have had an election at which the two major parties stood on a platform committing themselves to Brexit and the overwhelming majority of people in Monmouthshire and the rest of the country voted either Conservative or Labour. They were voting for Brexit. They were either voting for a socialist Brexit or a center-right Brexit. The only party standing on a platform of staying in the EU was the Liberal Democrats and they were totally hammered. So if the politicians don't realize that the public have voted for Brexit then I don't know what's going to make them realize that.

Brexit is a great opportunity to grow trade with other countries across the rest of the world, although I am happy to go along with keeping Single Market access within the European Union and being pragmatic about paying for that and accepting that it will probably come with strings attached.

Sputnik: Did the Russian ban on British beef affect your constituents (in Monmouth, south east Wales)?

© AP Photo / Alexander Zemlianichenko
Russia-UK Trade Shows Growth for 1st Time in 3 Years - Russia's Trade Rep
David Davies: It did. One of the things which had an effect since then was the ban on (EU) dairy products in Russia and clearly there is a lot of dairy produce coming out of Monmouthshire. Don't get me wrong. This isn't something that is driving the Monmouthshire economy down necessarily but it would be nice to have as many markets as possible for dairy produce.

Sputnik: Next year we have the World Cup, sadly without Wales. Could it be an opportunity for Russia to rebrand itself, perhaps in the way Germany did back in 2006?

David Davies: It is an opportunity and I hope there is not going to be any hooliganism on either side because there are hooligans in Britain and in Russia and the police on all sides need to work closely to ensure that nothing happens that mars the goodwill that ought to be spread as a result of the football.

Sputnik: Russia has a very important geographical location because it is between Europe and Asia and there is now a train going from Britain all the way to China. Do you think there is potential for a new Silk Road?

David Davies: Potentially yes. As an amateur historian, I am mindful of the fact that traditionally our links have always been with the English-speaking people of the world — North America, Australia, the Caribbean and many African states and I imagine that as there are diasporas in both directions and historical links that go back hundreds of years that leaving the EU will leave us looking to those markets first. Traditionally the British-Russian relationship hasn't been as close over the years but in the longer term I hope there is more to improve on and more potential for growth.