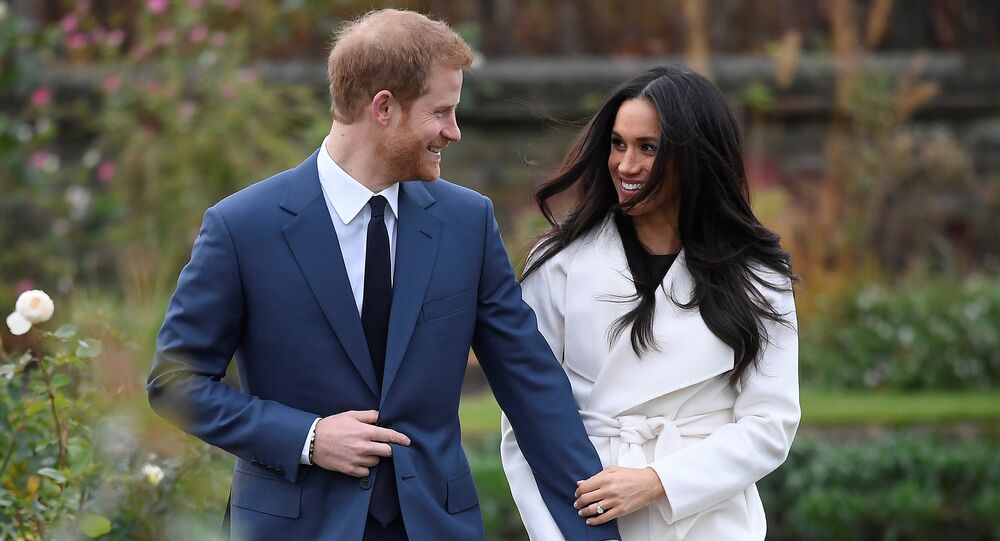 Following the announcement that Prince Harry will marry American Actress, Meghan Markle, Sputnik spoke to Thomas Mace-Archer-Mills, Chairman of the British Monarchist Society & Foundation on the Royal Wedding to get his views on how the ceremony will pan out and the current standing of the Royal Family in British Society.

Sputnik: Is the wedding coming at a convenient time to serve as a distraction for Brexit?

Thomas: As we’ve been analyzing what Prince Harry might be doing and how this is all going to play out, Brexit is Brexit whether there is a  Royal Wedding or not. I think that some people who don’t care much for the monarchy are going to see it pretty much as just wasting money, I do sympathize with them to a point, but to use the Royal Family as a way to distract from Brexit I think is wrong.

© AP Photo / John Stillwell
Daesh War Moves Into New Phase as Singaporean Jihadist Challenges Prince Harry
This is a time now where the country needs to come together, where we need to put our best foot forward and I think that some people need to feel part of Britain again. I think that a Royal wedding, not so much to the scale and standard to William and Catherine’s back in 2011 will be a boost for British morale, but I don’t think it will have an impact that previous Royal weddings have had. To use a Royal wedding to mask Brexit and to use it as an excuse, I think is completely wrong because we have a young man, number one, and a woman who are in love with each other, and I think that love is to be celebrated no matter whether you are a Royalist or not, so it’s always nice to see people happy in their private and personal lives.

Sputnik: Assuming it is held privately, should the public pay for the wedding?

Thomas: To be honest with you I don’t feel that the public should pay for the wedding. Now if the head of state is going, which she will and senior members of the Royal family we have to look at the cost and who’s paying, if it comes down to security and all of that.

The head of state needs to be protected no matter where she goes. However, if it comes down to a private ceremony, of course, no, I don’t feel at all that public coffers should be opened to pay for any sort of a wedding. However most of the time when we have a Royal wedding, we look at costs which are referred by the Royal Family itself, so the real term costs of Royal weddings are security, road closures, these sorts of things so we have to look in a non-biased way and see exactly what the needs are, who’s attending, where they’re attending from and if extra needs are required such as security and etc.

© AP Photo / Matt Dunham
Turning Heads and Turning 32: Prince Harry and Other 'Sexy' Royals
There’s always been anti-Royal sentiment, we can’t ignore that fact but the Royal Family is, in fact, riding high. They really are the best face of the British public. Everyone knows the Queen, so when we sit there and say do we like them?  Are they popular? Of course, they are. This is a country that lives and breathes monarchy. It runs in our veins.

Of course, you have a small population that doesn’t agree with that, that would rather see a republic but we are not France and we are certainly not America, and I think that’s what really sets us apart on the world stage.

Sputnik: How does the rest of the Royal Family view Meghan Markle?

Thomas: If we look at the change in the status of the Monarchy and if we look at the past and the present, now we know Prince Harry is not a conventional Royal, he’s always been there to test boundaries and push the limit and we know that about him.

We aren’t really surprised with his choice, but I think when we look at older members of the establishment, they might have a lot of reflection back on Wallace Simpson and what a divorced American meant for the monarchy back in the 1930’s.

However, we have graduated from that, we’re a very modern society and I think that the Queen has given her consent of course because she wants to see her Grandson happy, but she also needs to let the country know that the monarchy is changing, that the monarchy is keeping up with the times and is very much a modern institution.

I think there is going to be a little bit of apprehension from some of the old courtiers and some of the old guard, but I think some of the new members of the Royal Family, the younger, modern ones, will be the ones that push change.

However, most people don’t understand that change comes from the Queen. I think that we’re going to see a mix of emotions here for the upcoming Royal Wedding to the American Meghan Markle.

READ MORE: Who Is the Future Princess Henry of Wales? 11 Facts About Meghan Markle

Sputnik: Will there be a public holiday given?

Thomas: As Prince Harry is no longer number three in line to the throne, now that George and Charlotte have come along and now we’re going to have another Cambridge, I don’t think we will see a public holiday.

I myself don’t think it is appropriate, I think we will see a very different sort of celebration, not keeping in line with traditional Royal weddings that we’ve seen in the past.

Prince Harry doesn’t like Royal convention, he doesn’t really care much for all that pomp and pageantry, so I think we’ll see a blend of definitely some formalities but a very new twist on a very traditional way that Royals have always had their marriages, have had receptions, have had celebrations.

Of course, the public will want to see him and his new bride but I don’t think that pomp and ceremony will be there, which will require or dictate a big holiday.

Who Is the Future Princess Henry of Wales? 11 Facts About Meghan Markle