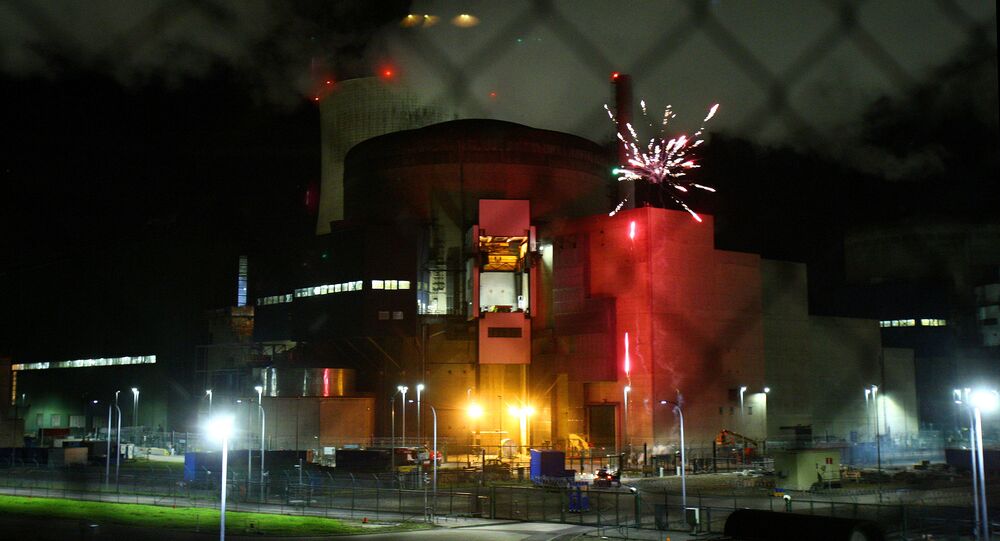 A group of Greenpeace activists have set off fireworks inside the Cattenom Nuclear Power Plant (NPP) in eastern France to raise awareness that such facilities may be targeted by terrorists. Speaking to Sputnik, French expert Stephane Lhomme described the action as a PR stunt but admitted that a terrorist threat to the NPPs is still in place.

He said that the move certainly "plays to the crowd" and that the Greenpeace activists have more than once penetrated the territory of the Cattenom NPP in order to attract attention.

"Of course, this is a perfect illustration that nuclear power plants are unsafe. However, it will not affect the [French] government's stance and it will not force Paris to abandon nuclear energy," Lhomme said.

© REUTERS / Yoan Valat/Pool
France Cautious About Reducing Nuclear Dependence Despite Growing Trend in EU
He recalled that after the 9/11 attacks, France's special services conducted an operation to "test" the level of protection of NPPs in the country.

At the time, a group of special agents had no difficulty penetrating the territory of nuclear facilities.

The information about the operation was leaked to the press, but the government continued to claim that the NPPs were adequately secured, but that it couldn't go into details,  according to Lhomme.

"In this vein, ordinary people in France are unable to find out what is actually being done there [in terms of providing security]," he said.

Lhomme also confirmed that used fuel storage pools could be more dangerous than reactors, since the protective body of these pools is unreliable.

"Despite repeated accidents at the NPPs, nothing has been done to protect these pools," he added.

Additionally, Lhomme referred to "achievements of technological progress, such as unmanned aerial vehicles (UAV), which can allow terrorist to conduct an attack against a nuclear facility."

"They may use the UAVs to conduct surveillance of the NPPs and collect relevant information," he said.

Lhomme recalled that a few years ago, a number of drones flew over several NPPs in France, in what provoked a public uproar and a subsequent government investigation.

"But later they never talked about it again and we never found out who was behind these flyovers," he concluded.

In a report released on Tuesday, Greenpeace warned that numerous French nuclear facilities pose a major security risk, as they were never meant to withstand a terror attack.

© AFP 2019 / CHARLY TRIBALLEAU
France May Shut Down 17 Nuclear Reactors Until 2025 – Minister
According to the report, French NPPs were built before the rise of terror organizations such as al-Qaeda or Daesh. Therefore, little or no attention was dedicated to protecting the facilities from a terrorist attack.

The report said that the citizens of France and neighboring European nations will suffer major damage should terrorists attack French nuclear facilities.

Right now, there are 58 reactors in France — second only to the United States in total number of nuclear plants — and there are 63 cooling pools where used fuel rods are cooled. Nuclear power constitutes the primary source of electricity generation in the country.