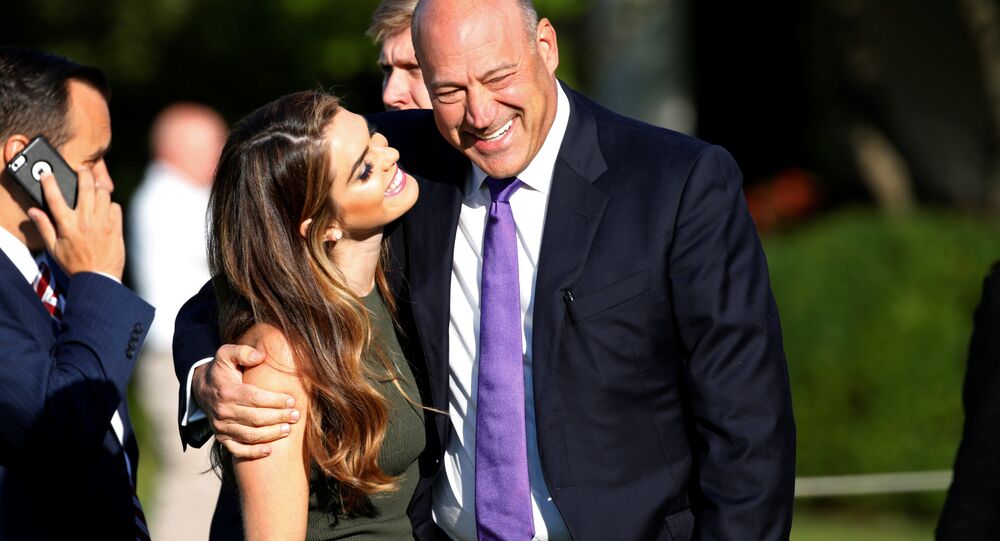 A journalist and banking and economics expert told Sputnik Radio that US President Donald Trump has been acting as a puppet of multinational finance titan Goldman Sachs, as his chief economic advisor, Gary Cohn, seems to be representing his former employer in the White House.

Fault Lines on Sputnik Radio, hosted by Garland Nixon and Lee Stranahan, invited author Gary Rivlin to discuss his explosive article on The Intercept, "Government By Goldman: Gary Cohn is Giving Goldman Sachs Everything It Ever Wanted From the Trump Administration." Nixon and Stranahan asked Rivlin to expound on his views of Cohn and Goldman Sachs and how they tie into the White House's economic policy.

​"I respected Goldman Sachs in the 90s," said Rivlin. "It really changed from a bank that helped build the economy, lending to corporations, taking companies public, et cetera, into a very different beast: a rip-your-face-off commodities trader doing deals that make them money but don't really seem to contribute much to the economy. It was Gary Cohn who was one of the main people who was behind that change in Goldman Sachs."

"Gary Cohn is really one of the main villains of the 2008 subprime crisis that almost took down the world economy," Rivlin continued. "It was Gary Cohn heading the mortgage desk that got Goldman Sachs aggressively into securitization — packaging up subprime mortgages and selling it to its clients that made them a major player in [the crisis]. Then, once Goldman Sachs at the end of 2006 realized this is not going to turn out, they did 'The Big Short:' secretly making bets against subprime mortgages, betting that subprime mortgages would fall at the same time they've got billions of dollars in subprime mortgages on the books and they're selling them to clients."

Rivlin said that he wasn't sure if Cohn was "still the president of Goldman Sachs pushing the Goldman Sachs agenda or the national economic advisor who is arguing on behalf of an agenda that will help those left behind, who I believe Donald Trump was elected to represent."

Nixon suggested it was the deregulation of banks under former president Bill Clinton, climaxing in the 1999 death of the Glass-Steagall Act of 1933, which had previously prohibited securities and investment banks from taking deposits, that drove the change in Goldman Sachs' behavior.

"You're exactly right," said Rivlin. "Actually it was a former Goldman Sachs man as treasury secretary, Robert Rubin, who helped deregulate. That helped set it up, so this subprime disaster would happen. I got to agree with you: Bill Clinton and his people deserve some of the blame for the subprime meltdown."

"The second event that is also relevant is Goldman Sachs went public in 1999, so they went from a partnership where in the past if they're fined by government the partners… [to a company] when for their sins in the subprime meltdown Goldman paid about $8.8 billion in fines, it was the company that paid. No single party, no single individual had to pay any price. Gary Cohn got in 2007 $72.5 million in compensation; there's no drawback, there's no penalty to him."

According to Rivlin, Cohn is "the main person giving economic advice at the Treasury Department, and while other departments are giving recommendations and advice for various policies, he's the one who's at the president's side distilling that, synthesizing that."

According to Rivlin, the common denominator of Trump's economic policies is that they all benefit Goldman Sachs — an interesting coincidence if his chief economic advisor is the bank's former COO. "The priority right now is tax cuts. I figured out that if Trump administration gets its way – it won't there'll be a compromise – but if it went from 35 percent tax rate for corporations to 15 percent, that'd save Goldman about $1.5 to $2 billion a year. Their approach to infrastructure… the Trump administration's plan is the Goldman Sachs plan. Rather than a trillion dollars for infrastructure, it's $200 billion in federal money and we're just going to privatize the rest. Let's let a Goldman Sachs, Morgan Stanley, whoever, finance it and collect the tolls on a toll road."

"At end of June, the FTC [Free Trade Commission] relaxed the rules for going public, that you don't have to share as much information with the public before going public. So if you go down the line you see that the Goldman agenda and the Trump agenda are one and the same," the author said.

Goldman Sachs Downgrades US Q3 GDP by 1% Due to Hurricanes