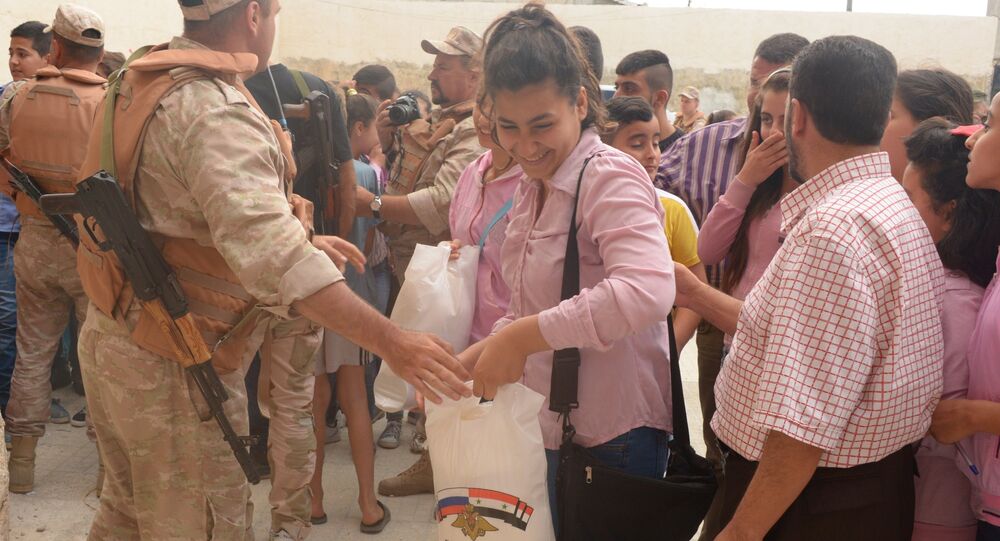 Shortly after unrest erupted in early 2011, the European Union imposed economic sanctions on Syria, while also suspending, and ultimately terminating, many development projects. Noha Chuck, CEO of the Syrian Enterprise and Business Centre (SEBC), managed cooperation between Syria and the EU.

She took part in a Q&A with Sputnik to provide insight into the EU's relationship with Syria in a pre-war context.

"Cooperation between Syria and the EU started to intensify following the Barcelona Declaration in 1995 with the first technical assistance program allocated to Syria, namely the Syrian-European Business Centre. From then on, cooperation channeled through the EU Commission to Syria started to take place, especially following the Framework Agreement signed in 2000 and Syria's ambitious economic reforms and its intent to move from a centrally planned economy, to a social market economy," Noha Chuck told Sputnik.

She then went on to outline the nature of the cooperation, highlighting that Syria benefited in terms of economic, social and democratic development.

"Focusing on political dialogue, mutually beneficial trade and investment relations, and cooperation on economic, social and democratic reform, EU cooperation is defined in the Country Strategy Paper and the National Indicative Programme, and has contributed to the enhancement of virtually all sectors, whether directly or indirectly.

"Despite the fact that the EU-Syria Association Agreement, which was drafted in 2004 and updated in 2008 to take into consideration the reform of the Syrian customs tariff and EU enlargement, was initialized, but never ultimately signed, EU cooperation has strongly contributed to the enhancement of the Syrian community by targeting the trade sector and business community dynamics with view to liberalize the economy and increase private sector contribution to GDP."

Ms. Chuck also discussed how the EU worked with Syria to improve its policy making ability, access to financial markets, and modified its customs authority to meet EU standards.

"More focused interventions followed with the Trade Enhancement Programme which started in 2009 with the aim to contribute to liberalizing trade, remove non-tariff barriers and help upgrade the Syrian customs authority in line with EU and international practices, with the proposition to adopt Asycuda computerized customs management system, which was later picked up by the Government of Syria and implemented by the UNDP. This program coincided also with the Public Finance Reform Programme, which aimed to harmonize the Syrian institutional framework in taxation and public expenditure management, including customs rules and operations," Ms. Chuck said.

© REUTERS / Omar Sanadiki
People take pictures of each others at the Umayyad Square in Damascus, Syria April 7, 2017.

The EU also worked with Syria to improve the quality of its products to meet EU standards, with the ultimate goal of accessing the EU market.

"The Syrian Ministry of Industry benefited from the Quality Infrastructure Programme which started in 2010 with a view to promote quality and accreditation, eventually enhancing the potential of Syrian products to access EU and other international markets. Legal reforms, quality of legal drafting and decision making support were also targeted by the Business Environment Simplification Programme which started in 2010, and helped establish and provide technical support to the Syrian Competition and Anti-Monopoly Commission and establishment of Decision Making Support Unit attached to the Prime Ministry."

Ms. Chuck also outlined some programs between Syria and the EU regarding education and healthcare.

"These were followed with Support to Secondary Education Reform aiming to upgrade the performance of human resources in Syria in line with national requirements, with the specific aim to reform and upgrade the Syrian Secondary Education Sector in response to the needs of the Syrian social market economy. Health Sector Modernisation Programme II in Syria aimed to improve the health status of the Syrian population through improved equity, efficiency and quality of the health system by strengthening the capacity of the Government of Syria to implement the health component of the 10th Five-Year Plan and related policy frameworks with the aim to increase utilization, equal access and quality of health care.

"While the above provides only a glimpse of the EU's diverse technical support to Syria, it can be said that EU-Syria cooperation was on the right track to help Syria achieve its promised reforms and it was destined to increase in quantitative and qualitative terms," Ms. Chuck told Sputnik.

She also explained how the EU responded to the outbreak of unrest in 2011.

"The EU was quick to respond to the Syrian crisis which started in March 2011 by suspending all technical cooperation with the country two months later. Following the six month term of technical assistance suspension, the EU decided to cancel all its ongoing and upcoming support, ultimately bringing the EU-Syria cooperation to a halt. While it is redundant to discuss the approach taken by the EU and the argument that the EU could have still worked with the Syrian government on introducing quick and real political reforms that could have contributed to easing the intensity of the crisis, the EU sanctions manifested in measures against the Government of Syria have in essence constituted a severe blow to the ambitions and development prospects of the Syrian people, who always looked at the EU as a fair and neutral helping partner."

Although collaboration in many sectors has ended, Ms. Chuck briefly outlined how the EU has continued to provide some assistance.

"However, despite the fact that EU-Syria cooperation ended following the crisis in the country, the EU still provided assistance to the Syrian population through mobilization of funds targeting the relief and recovery assistance to those affected by the conflict inside Syria and in neighboring countries. Of particular importance in this respect are the funds mobilized through the European Neighbourhood Instrument into Syria with the aim to support the resilience of the population affected by the crisis and to pave the way for transition and post-conflict recovery of Syria.

"Still, the EU has and is still indirectly providing assistance to Syria through funding UN agencies, INGOs and European entities currently working in Syria."

On the topic of potential cooperation in a post-war scenario, she said:

"It remains to be seen how the EU would respond to post-conflict Syria. Will the EU's decision be based on its current political stance or would it be made regardless of any future political settlement? International politics have always been changing in line with interests, and EU politics are no exception to the rule; hence, the EU might resume its cooperation given the fact that post-conflict Syria might be a considerable investment and development opportunity."