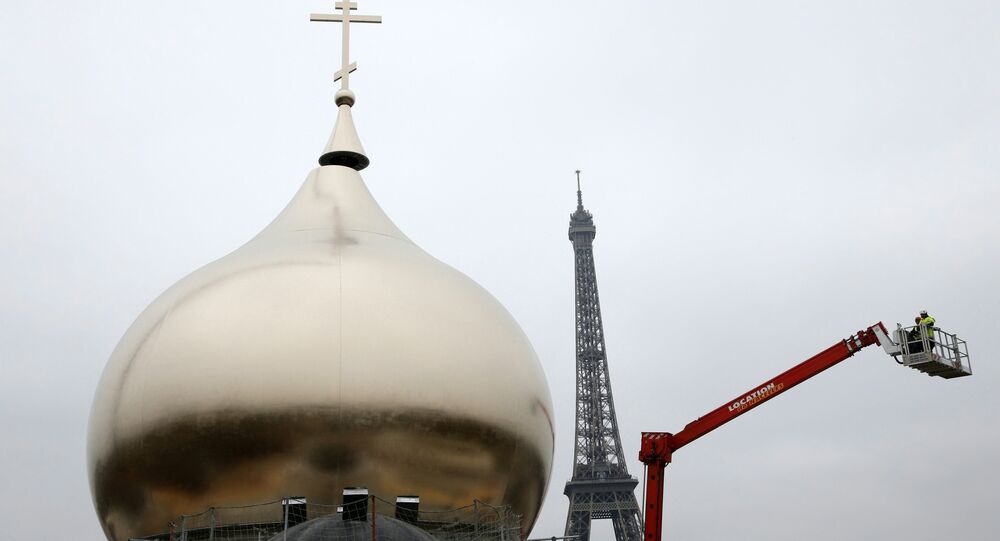 Elites vs the People: Ordinary Europeans' Attitudes to Russia are Changing

Russian commentators Anna Shafran and Elena Ananeva offer an interesting perspective on why many ordinary Europeans do not consider Russia to be their enemy, whatever politicians and the media might say.

Throughout the recent period of chilly relations between the West and Russia over the crisis in Ukraine, Russian state and independent media has been careful to separate its criticism of Western politicians and the media from the ordinary people of these countries.

Now, over two years since the start of the crisis, and despite being subjected to a torrent of anti-Russian propaganda, journalists and analysts are finding that more and more, ordinary Europeans' attitudes toward Russia are becoming disconnected from the rhetoric of their politicians and media.

© AFP 2020 / JONATHAN NACKSTRAND
Revise Eurovision Results! European Broadcasting Union to 'Look Into' Petition
This phenomenon has several manifestations that periodically come to the fore. In an op-ed piece in Russia's Svobodnaya Pressa online newspaper, prominent Russian radio journalist Anna Shafran suggested that most recently, the divide between elite and popular opinion demonstrated itself in the scandal over Eurovision, where the performances of Ukrainian and Russian artists were turned into a political farce.

"Ordinary Europeans voted for our performer, while the 'bosses' in the jury switched up the results, because 'it's not right that the Russian might win'. But that's just one example."

"Here's another: Italy's Veneto region Regional Council has voted on Crimea. MPs want to officially recognize the peninsula as part of Russia, and abandon anti-Russian sanctions. What will this lead to? Formally, in the near future, nothing. In reality, the decision on the sanctions is made, at a minimum, at the national level, and in reality, at the EU level. And Brussels will hardly dare to go against the will of their masters in Washington."

© Sputnik / Sergei Malgavko
Venetians Aren't Blind: Veneto Regional Council Votes to Acknowledge Crimea's New Status
"And here's a third example," Shafran writes. "Last month, the French parliament voted in favor of lifting anti-Russian sanctions. This too did not have any effect, it seems. And what's the end result? Lawmakers represent their constituents; the French people are against the sanctions, Venetians are against sanctions; we can assume that Europeans as a whole are against sanctions."

"And European leaders? They too are probably against sanctions (in their private thoughts), but continue a policy that favors the US, and harms their own people. Where will it all lead? Soon, another Russia-related international problem might emerge, and then another, and so on and so forth. Eventually, at their wits' end, Europeans will begin creating openly pro-Russian parties, and they will win elections."

"Yes, Russia is attracting them," the journalist suggests. "Moscow today is a real alternative to both the European bureaucracy and the US. We have our own problems, sure, but so do they. Ordinary Europeans, for instance, are getting tired of the ideology of 'tolerance' mixed with a lack of spirituality. But above all, they do not see Russia as an enemy. They do not see an 'evil empire' which threatens to impinge on their freedoms and well-being."

© Sputnik
Anti-Russia Propaganda 'Reached an Impasse'
"Washington by contrast, wants to dominate. It dictates to Europeans on issues large and small. Who could like such a boss? It turns out that for ordinary Europeans, it's the US, not Russia, which is the 'evil empire'."

"And so, not by our efforts, but factually because of us the EU may simply implode or, ideally, radically change its political orientation, toward a normal one," Shafran concludes.

In a separate commentary on the recent poll by the British tabloid Daily Express which found that nearly 80% of Express readers would be ready to move to Russia if offered free land, UK specialist Elena Ananeva noted that while the survey results could be taken as a light-hearted joke, they are not without a kernel of truth.

The Daily Express survey, polling over 22,000 its readers, found that 78% "would seriously consider quitting Britain and emigrating to Russia" if offered free land, inspired by Russian President Vladimir Putin's decree granting Russian citizens the right to freely use up to a hectare of land in the country's Far East.

Speaking to Radio Sputnik, Ananeva, the director of the Center of British Studies at the Russian Academy of Sciences' European Institute, said that while the survey could not be considered at all representative, it's not entirely without merit.

© Sputnik / Artem Zhitenev
Cost of 'Western Unity': Anti-Russia Sanctions Hit EU 10 Times Harder Than US
"This poll is unrepresentative because the Daily Express simply posted the survey, and it was responded to on a voluntary basis. This is not a representative sample; therefore the talk about moving is more a joke. Still, as they say, there's a grain of truth in every joke, and therefore it's something that can be discussed in all seriousness."

"Britons," Ananeva recalled, "are unhappy with the policy of Prime Minister David Cameron. They do not sympathize with Labour leader Jeremy Corbin because he's too far to the Left. But they impressed by the approval ratings of Vladimir Putin, who they consider as a strong leader. Britons don't appreciate the uncertainty associated with Britain's position in the European Union. Their frustration with and rejection of British politics has been evident for quite a long time. Therefore, the survey shows that Britons are not so much enraptured with Russia as they are unhappy with the situation inside Britain itself."

At the same time, according to the analyst, politicians have failed to shift public attitudes against Russia, even if they're not pro-Russian either.

"Britons aren't bothered by Cameron's anti-Russian rhetoric. In connection with the Ukraine crisis, ordinary people on the whole have reacted to Russia in a more balanced way than their own government. And a recent survey of Europeans and Americans has also shown that Britons are not too anti-Russian, but aren’t pro-Russian either. Their position is somewhere in the middle."