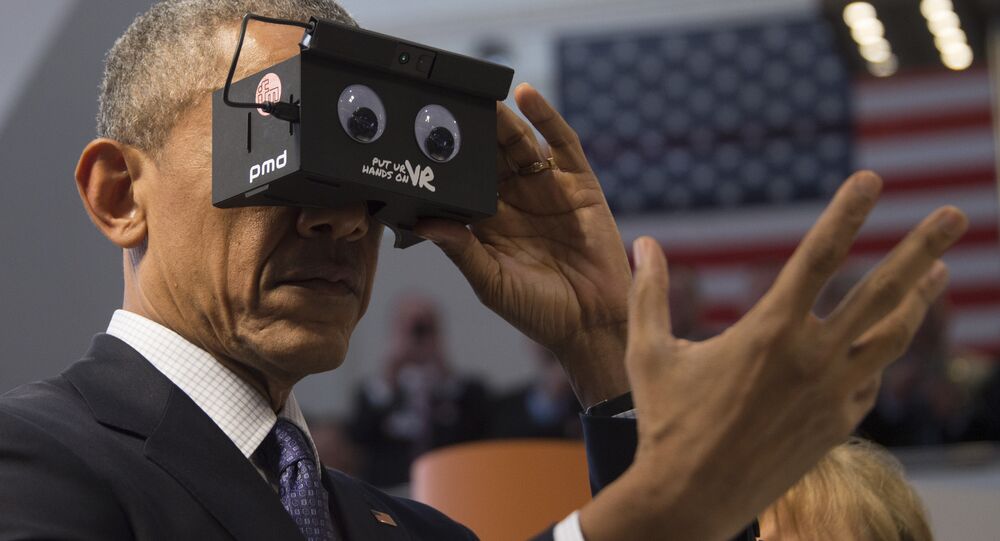 The terrifying dystopian vision described by science fiction writer Aldous Huxley is not a description of the totalitarian states of the 20th century, but a creeping reflection of today's reality, says Russian journalist Konstantin Syomin.

Last week, visiting a technology fair in Hanover, as part of his trip to Germany, President Barack Obama and Chancellor Angela Merkel tried on 'virtual reality' glasses. The president reacted to the technology, quipping that "it's a brave new world!"

​"It's hard to find a more appropriate analogy," Syomin said, recalling the Aldous Huxley novel of the same name published between the first and second world wars.

"Huxley described a future in which the world was run by a global government. In this world the only religion was consumption, machines do the majority of the work, and people, sorted by castes and by social position, remain in a state of eternal euphoria, thanks to propaganda and hallucinogenic drugs."

© Sputnik / Igor Zarembo
As NATO Expands Along Russia's Borders, Did It Not Get Putin's Message?
"In its own time," the journalist recalled, "Huxley's writings, just like those of George Orwell, another famous warrior against utopias, were widely used in the propaganda war against the Soviet Union. It was the USSR, it was said, that dreamed of a world government, the unification of humanity, and the building of heaven on earth. The Soviet vision was branded and ridiculed, compared either to the Gulag Archipelago, or to an 'Animal Farm'."

But it's today, Syomin notes, "25 years after the destruction of the Soviet 'animal farm', that it's becoming more and more difficult to perish the thought that the prophecies of Orwell and the narcotic-laden tales of Huxley" are actually slowly becoming a description of our time.

During his Germany trip, in his 'address to the people of Europe', Obama made an observation, saying that "we are fortunate to be living in the most peaceful, most prosperous, most progressive era in human history. This may surprise young people who are watching TV or looking at your phones," the president remarked. "It seems like only bad news comes through every day. But consider that it's been decades since the last war between major powers."

The simple truth, Obama noted, was that "if you had to choose a moment in time to be born, any time in human history, and you didn't know ahead of time what nationality you were or what gender or what your economic status might be, you'd choose today…"

The president's address, Syomin noted, was not without a logic of its own. "If Obama convinces Europe to sign the Transatlantic Trade and Investment Partnership, then the 'Brave New World' will maintain and strengthen its economic position amid a global crisis."

However, "it would be interesting to know what moment in time the 250,000 citizens of Syria who didn't live to see this Brave New World would choose to be born, or the 650,000 citizens of Iraq, or the 140,000 citizens of Yugoslavia, or 30,000 Libyans. What year would the residents of Donbass, Odessa, Mariupol, Kharkov, Kiev," or much of the rest of the former Soviet Union "want to find themselves in?"

© Photo : US Air Force
Syria on $3 Mln per Day: How Russia's Campaign Compares to Five Most Expensive Military Ops Since WWII
What's more, Syomin recalled, in the course of the last quarter century, "'democratic interventions' have cost the lives of almost 10,000 Americans, and 50,000 more wounded. This is more than all the Pentagon's losses since 1975, following the conclusion of the Vietnam War. That is, by any measure, the world during the Cold War was much closer to peace than it is today."

Late last month, German Foreign Minister Frank-Walter Steinmeier told Germany's Handelsblatt newspaper that "there is still no lasting order to replace the old one – the world is still in search of a new order. And the ongoing struggle for influence and domination is not being conducted in a peaceful academic atmosphere; it can also be violent."

And in this 'Brave New World', Syomin says, "a stupefied German chancellor in her virtual reality glasses is being pushed more and more toward the east. [Last week] it was reported that the Luftwaffe would receive a base and runway in Turkey, where a full wing of Tornado fighter jets would be based. The presence of the Bundeswehr on the border with Russia is also set to become imposing and permanent."

© REUTERS / Murad Sezer
Germans Use Social Networks to Teach Their Politicians a Lesson in History
Last week, the German government announced plans to send German troops to Eastern Europe as part of a NATO mission of permanently rotating units based in the Baltic states, Poland and Romania. At the same time, the Pentagon deployed a pair of F-22 fighter jets to southeast Romania, while nearby, US equipment redeployed from the Middle East was being repainted and reequipped for operations in the European theater. This month, Lithuania and Estonia announced that they were beginning major drills involving thousands of NATO troops near their borders with Russia.

"And all this," Syomin warned, is "taking place against the background of more and more frequent air interceptions and other 'accidental' contacts with our foreign partners in the air and at sea. And the US is behaving in the same sort of recklessness in the South China Sea, which appears once again to have found itself too close to American shores. For the second time in a row the US defense minister landed aboard an aircraft carrier to send a disciplinary message to the 'stubborn' leaders in Beijing."

The US initiative, Defense Secretary Carter told reporters, is "just a piece of a larger network of security that the United States is part of. And that is the key to keeping peace and stability here. And for the future, that is what we want for everyone, including China."

© Photo : Youtube/ 自由の声4
China Test Launches New Multiple-Warhead Missile, Raising Concerns in Washington
Beijing responded by noting that the "'freedom of navigation' has become an excuse for the US to meddle in South China Sea disputes," and warned that "US operations are promoting militarization and endangering stability." Defense Ministry spokesman Colonel Wu Qian emphasized that "no matter how frequently US ships come to the South China Sea, that will not change the fact that the islands…are China's inherent territory." Moreover, he said, they "will not shake the will of the People's Liberation Army to resolutely safeguard the sovereignty and security of China."

The question, he suggests, "is whether today's baobab has had enough blood, or perhaps the blood of fools will also suffice?"

'On the Ropes': Why NATO's Bark May Be Worse Than Its Bite