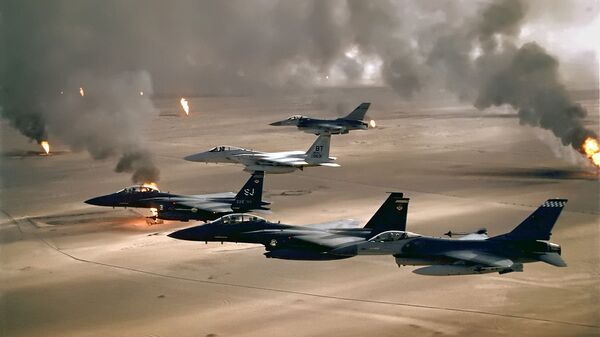 © Photo : US Air Force
Subscribe
International
India
Africa
Ilya Tsukanov
All materialsWrite to the author
Last week, Russian President Vladimir Putin revealed the price tag of the Russian anti-terrorist air operation in Syria – 33 billion rubles (about $464 million US). To get a handle on whether this was a little or a lot, Russia's RIA Novosti news agency has prepared an overview of some of the most expensive military operations since WWII.

Russia’s 'Largely Achieved' Syrian Objectives in Facts and Figures
On Thursday, Putin surprised Western experts, who had earlier estimated that Russia's air operation was costing the Kremlin $4-$8 million per day, by revealing that the campaign, which stretched from late September 2015 to March 2016, actually cost Russia about $464 million (under $3 million per day).

"The military operation in Syria, of course, required certain spending, but the main part was from the Defense Ministry's resources – around 33 billion rubles. [This sum] was included in the Ministry's 2015 budget for holding drills and military training. We just redirected these resources for supporting the group in Syria," Putin said, speaking at a ceremony summarizing the results of Russia's five-month-long anti-terror campaign.

With this price tag in mind, Russian news agency RIA Novosti decided to take a look back at some of the most costly military operations since WWII.

"The war in Kosovo," RIA Novosti recalls, "ended with the 78-day NATO operation, code-named Operation Allied Force, which saw attacks by Allied aircraft against military targets and civilian infrastructure in the Federal Republic of Yugoslavia (FRY). According to estimates by journalists from the BBC and military experts from the British military publishing company Janes, the bombing campaign cost NATO about $43 billion."

"In the course of the operation, Allied aircraft dropped more than 23,000 bombs, destroying about half of the FRY's economic production capacity," the article highlights. Serbia estimates that it sustained about $29.6 billion in losses. According to Yugoslav authorities, the NATO air campaign resulted in the deaths of over 1,700 civilians, and about 10,000 serious injuries.

Growth of Cancer Rates in Serbia Blamed on 1999 NATO Bombings
In total, NATO flew about 35,000 sorties and launched about 550 cruise missile strikes; of the 23,000 bombs that were dropped, approximately 35% were precision-guided. At the same time, experts estimate that about 31,000 rounds (about 15,000 tons worth) of depleted uranium ammunition was fired on targets in Serbia and Kosovo, mainly by A-10 close air support bombers; the use of such weapons is believed to have resulted in a dramatic increase in cancer throughout the region.

The campaign ultimately resulted in Kosovo breaking away from Serbia, and declaring independence in 2008; many countries, including Serbia, Russia, China, India and Brazil, refuse to recognize the legitimacy of the move.

Operation Desert Storm: Kicking Iraq Out of Kuwait 25 Years Ago
"The Gulf War of 1990-1991," RIA Novosti notes, "can be considered one of the most transient military conflicts in US history. The Combat operation by a multinational coalition of forces led by the United States under the codename Desert Storm lasted 42 days, and ended with the liberation of Kuwait and the withdrawal of Iraqi forces."

Desert Storm, the news agency recalled, "became the first illustration of the methods of a new generation of high-tech warfare," featuring an air campaign with the heavy use of 'smart' precision-guided weaponry, as well as electronic warfare, complemented by round-the-clock news coverage by news agencies like CNN. "According to the Congressional Research Service, the operation cost the United States $102 billion, and the lives of 298 servicemen." 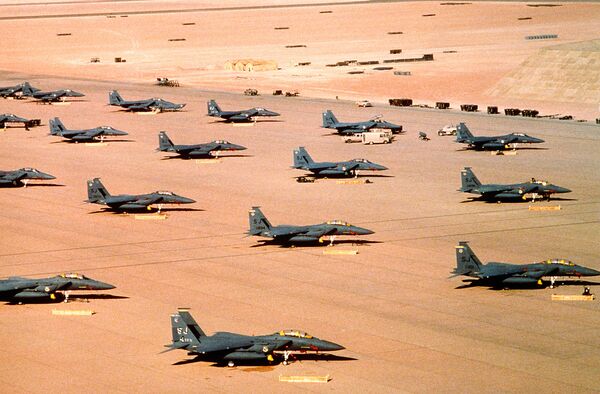 Korean Crisis: Why Neither Side Would Be Able to Achieve Victory in a War
"On June 25, 1950, North Korean troops crossed the 38th parallel and launched an attack on South Korea; the same day, the UN Security Council promptly decided the 'Korean question', taking advantage of a boycott by the Soviet delegation" (in connection with the organization's refusal to accept Communist China as a permanent member of the Security Council), "adopting a resolution proposed by the United States in favor of military assistance to South Korea."

"UN forces, consisting mainly of American troops, and under the command of General Douglas MacArthur, were sent to the peninsula. China's intervention in the war allowed North Korea to regain lost positions, and the war would drag on for three years. Factually, it ended with the signing of a ceasefire agreement in 1953, but a peace agreement between North and South Korea has yet to be signed." 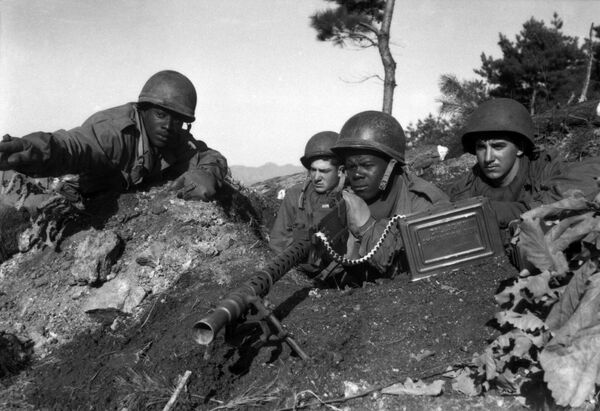 Soldiers from the U.S. 2nd Infantry Division in action near the Ch'ongch'on River, November 20, 1950
© Wikipedia

"One of the largest battles of the war," RIA Novosti recalled, "was the Battle of Taegu, during which the Allied Air Force carried out the most ambitious operation since the Normandy landings. Hundreds of B-29 bombers dropped over 3,000 five hundred and thousand pound bombs."

In the course of the war, Allied carpet bombing is estimated to have destroyed upwards of three quarters of North Korea's population centers; in all, the US dropped 635,000 tons of bombs, including 32,000 tons of napalm, on the peninsula, which is more than the total dropped during the entirety of the US's Pacific campaign in WWII.

"In 1965, North Vietnamese guerrillas attacked a US military base at Pleiku, central Vietnam, and the United States launched Operation Rolling Thunder, which would become the longest US Air Force bombing campaign since the Second World War. Air strikes on North Vietnam cost Washington about $900 million," while on the whole "the Vietnam War, which lasted eight years, would cost the US $738 billion [in 2011 dollars] and more than 58,000 US military personnel." 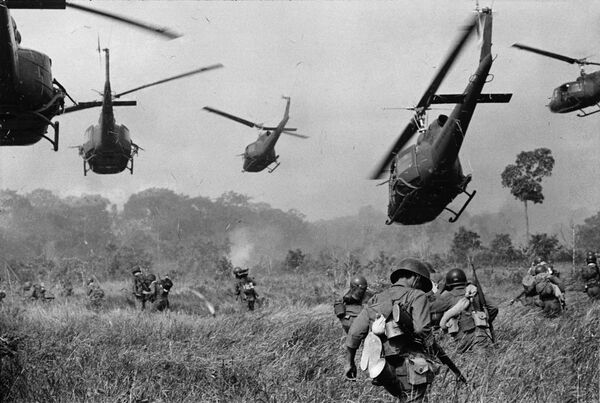 "Vietnam," RIA Novosti notes, "is arguably the most written-about war in US literature; over 500 films and series have been created devoted to the war, recreating the mythology of a campaign which has left an indelible mark on the mind of American society. One of the consequences of Washington's participation in the war was the 'Vietnam syndrome', manifested in the refusal of many Americans to support risky and long-term military campaigns."

US Uses Vintage Planes From Vietnam War Era Against Daesh
Between 1965 and 1975, the US Air Force dropped an estimated 7.6 million tons of bombs in Vietnam, Laos and Cambodia, almost triple the total tonnage dropped during the Second World War. Moreover, poisonous defoliating agents were sprayed on over 20 percent of the total area of South Vietnam, destroying millions of hectares of agricultural land. The Vietnamese government says that as many as 3 million people continue to suffer from illnesses related to Agent Orange, with the Red Cross of Vietnam estimating that upwards of 1 million people are disabled or suffering serious health problems due to the defoliant.

The Vietnam War resulted in the withdrawal of US forces in 1973, and Vietnam's unification in 1975 following a North Vietnamese invasion and the capture of Saigon.

"After the September 11, 2001 terror attacks, US President George W. Bush launched Operation Enduring Freedom," a series of campaigns ostensibly aimed at combating global terrorism in countries around the world, from Afghanistan and Iraq, to the Philippines, Somalia, Pakistan, Yemen, and Indonesia.

The Congressional Research Service has estimated that the total cost of the war between 2001 and 2010 alone as having amounted to $1.147 trillion (adjusted for inflation). However, according to a 2013 estimate by Professor Linda Bilmes of the John F. Kennedy School of Government, if the costs of long-term medical care and disability compensation, military replenishment and social and economic costs are taken into account, the total cost of the war will amount to between $4 and $6 trillion dollars once all is said and done.

What is Utterly Wrong About Washington's Foreign Policy Doctrine
Bilmes points to the medical treatment provided to 886,161 veterans from Iraq and Afghanistan, and the fact that 783,623 of them, as of 2013, had filed disability claims with the Veterans Administration. "The largest portion of that bill is yet to be paid," she said.

"This," RIA Novosti noted, "makes the War on Terror the most expensive conflict in American history. In World War II, previously considered the most expensive campaign in US history, America spent an estimated $3 trillion [accounting for inflation]."

In addition to its monetary costs, the War on Terror has cost the US-led Coalition thousands of soldiers' lives, with tens of thousands more injured. Neither the War in Iraq nor the NATO War in Afghanistan can be said to have been even a qualified success. Following over a decade of sectarian violence, large swathes of western Iraq are now occupied by Daesh Islamist militants. Afghanistan, meanwhile, has seen the Taliban regain control over large areas of the country as the NATO mission winds down.