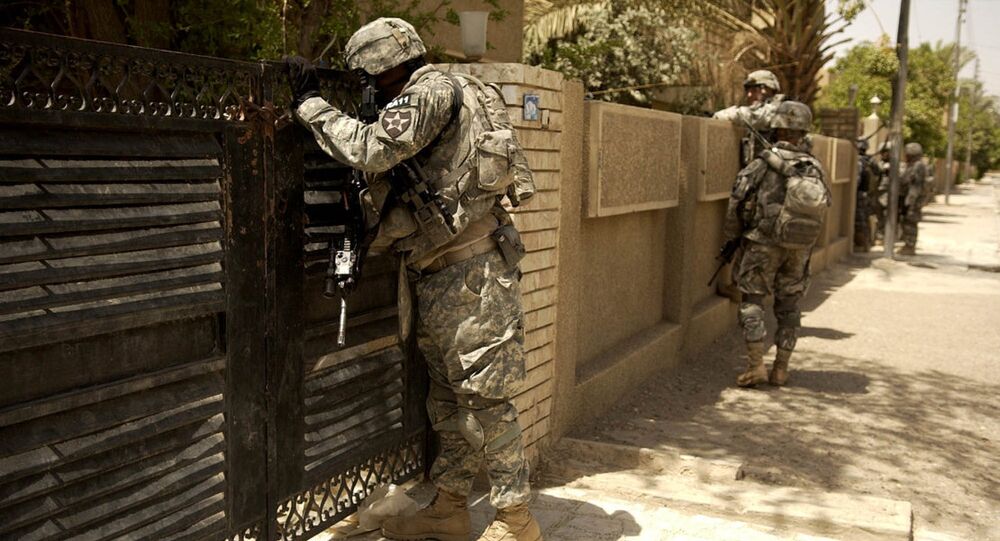 US military solutions have failed when it comes to the Middle East, analyst Perry Cammack wrote, remarking on the 25th anniversary of the first Gulf War.

Military action in Iraq has tied up the US in an endless conflict which will continue to affect the future US president, Carnegie Endowment associate Perry Cammack wrote in The National Interest.

Cammack noted that the first Gulf War, which began a little over 25 years ago, dislodging Iraqi forces from their occupation of Kuwait, "marked the high water mark of American post–Cold War power," and that leaving Saddam Hussein in power was the right choice.

"But amid talk of a new world order, the hundred-hour ground invasion was only the opening chapter in America’s tragic twenty-five-year Iraq story," Cammack wrote.

© AFP 2020 / USAF
No Kill Like Overkill: US Deploys F-22 in Syria for No Real Reason
He added that the increasingly unpopular sanctions regime, which has only hurt the Iraqi people, did nothing but make Saddam Hussein more of an enemy to the US. The decision to go on an imperial nation-building scheme by George W. Bush, under the pretense of fighting terror, only accomplished the opposite.

"Terrorist organizations had long operated in the shadows of the Middle East. But only since the second invasion of Iraq have they been able to recruit thousands of foreign fighters to the heart of the region, control vast territory and engage in nihilistic destruction on such a grand scale," Cammack added.

"Iraq began again to fall apart, slowly at first, then more quickly as armed revolution began to shake Syria. Eventually this disintegration forced Maliki’s ouster, but not before the Iraqi army collapsed like a house of cards in Mosul in June 2014, against a vastly outnumbered IS force. By August, the American bombing of Iraq had commenced again," Cammack wrote.

© Sputnik / Iliya Pitalev
What 'Plan B'? Syrian Crisis Resolution Has No Viable Alternatives
While Cammack does not give advice, he however wrote that three lessons can be learned from the experience of attacking the country with no positive results.

Those, to Cammack, are abandoning ideological approaches such as isolationism or nation-building, choosing an objective that can lead to success, rather than simultaneously trying to attack Daesh and Syria's Bashar Assad while trying to stop the refugee crisis. Lastly, he wrote, the US needs to look at issues of governance in the Middle East over military intervention.

Refugee Crisis Responses : EU, US Must 'Stabilize the Situation in Syria'