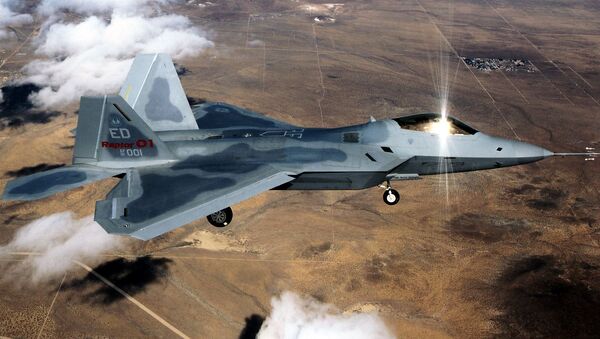 © AFP 2021 / USAF
Subscribe
The US deployment of extremely sophisticated and expensive F-22 Raptor fifth generation stealth fighter aircraft against Daesh militants in Syria turned out to be largely unnecessary.

What is the Difference Between Russia's and US' Air Campaigns in Syria?
The ongoing campaign against Daesh forces in Syria and Iraq became the maiden combat deployment for the aircraft that’s worth about $400 million apiece, with the first sortie against Islamist ground targets taking place on September 22, 2014.

Since then, F-22s have been regularly deployed against Daesh assets, dropping over 200 bombs on ground targets over the course of some 150 missions. The problem is, the aircraft was built with a slightly different purpose in mind to put it mildly.

"The F-22 is clearly a capability we do need — a niche, silver bullet solution for one or two potential scenarios — specifically the defeat of a highly advanced enemy fighter fleet," the then-Secretary of Defense Robert Gates said in 2009 during Senate hearings. "The F-22, to be blunt, does not make much sense anyplace else in the spectrum of conflict."

And if there’s one thing that Daesh most certainly lacks at the moment, it would definitely be 'highly advanced fighter fleet.'

Meanwhile, even the use of such sophisticated hardware doesn’t prevent the US-led coalition from inflicting significant collateral damage during its airstrikes, as two Syrian families were killed during an air raid in the vicinity of Raqqa. According to local media reports, the coalition warplanes targeted the town of Tell Abyad, located not far from the so called 'capital' of Daesh.

000000
Popular comments
F-22 deployment is not meant for Dahesh, it is meant for the Iranians and Russians. After all, don't the Americans see Russia and Iran as their greatest threats?