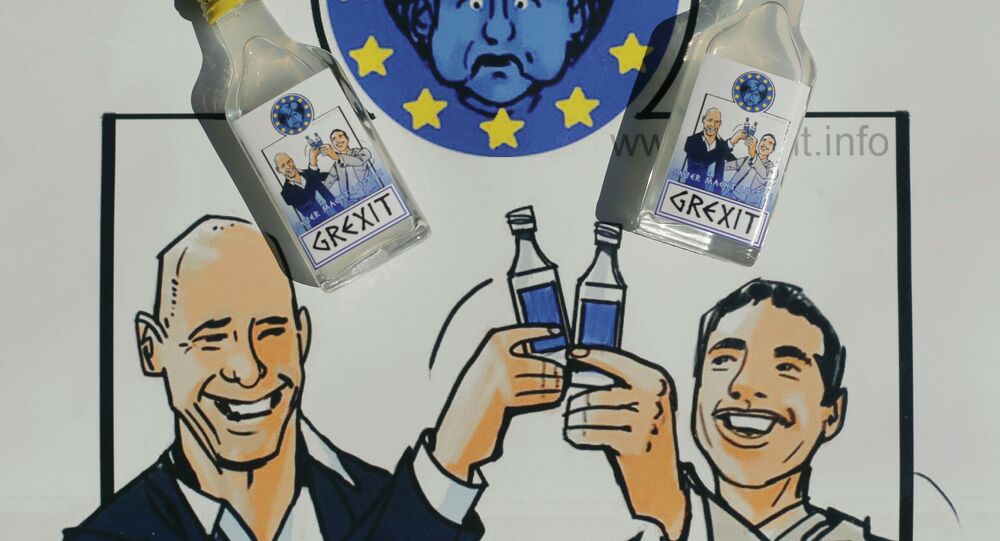 © Flickr / Stowe Boyd
A Trojan Horse in the Home of Austerity
WASHINGTON (Sputnik) — A Greek exit from the Eurozone, or Grexit, could set off destabilizing consequences for Europe, especially in its southern, Mediterranean tier because of Athens’ strategic position, experts told Sputnik.

“Currently, it is safe to argue that Greece’s stability is probably as important to the United States and the European Union (EU) as [it was] in the Cold War years,” International Telematic University Professor of International Relations and European Integration Kyriakos Kouveliotis told Sputnik.

The first, he said, was the geopolitical location of the country in the crossroads between East and West, North and South, Europe and Asia and between Europe and Africa.

© Sputnik / Vitaly Podvitski
The Greek Escape?
The second was the strategic role Greece plays to the current turmoil in southeastern Mediterranean, while the third was the fact that Greece is an active member in all major international organizations.

Greece’s exit from the euro could unleash “a nightmare scenario,” the professor warned.

The destabilization of the country will lead first to a humanitarian crisis and then to political turmoil and hostile attitudes toward the EU and the United States, he continued.

“This will be an issue for the United States and it will negatively affect their free trade talks with the EU,” the analyst said.

University of Scranton Professor of Economics and Finance Iordanis Petsas agreed that if the crisis was allowed to get out of hand, far graver consequences could follow.

Ripple effects from a Grexit could spread across the EU, he feared.

© AP Photo / Markus Schreiber
Merkel Tired and Overwhelmed, Unable to Prevent EU Collapse – German Media
“Greece is a small country when it comes to international trade. Therefore, the trade impact of a possible Grexit on the rest of the world is very small. However, the EU will be more fragile,” the economist cautioned.

Currently, Greece remains in a very difficult position, Petsas noted. Its banks are closed and capital controls are in place. “There is big uncertainty as to when the bank holiday will end,” he said.

A major US concern is that a sovereign default by Greece or other Eurozone member or the failure of a major European financial institution could reverberate throughout the global economy in much the same way as the US sub-prime crisis did in 2008, the economist warned.

“I hope that there is sufficient determination among the European governments to follow the right policies and maintain a single currency at least for the foreseeable future,” he said.

Consequently, “I think that [US] interest lie mainly on the political domain and not on the economic one,” he remarked.

Kouveliotis emphasized that the main implications for the Western world from continued crisis in Greece would be more political and less economic.

“We should also take into consideration that there is currently a huge illegal immigration stream from the east to the Aegean Sea and the Greek islands,” he said. “This poses a potential security threat for the United States and it is the main reason why they are against Grexit from the Eurozone.”

Leaders from all 28 nations in the European Union will discuss the Greek crisis at a summit meeting in Brussels on Sunday.

Lack of Goodwill and Political Expediency Blamed for Greek Crisis