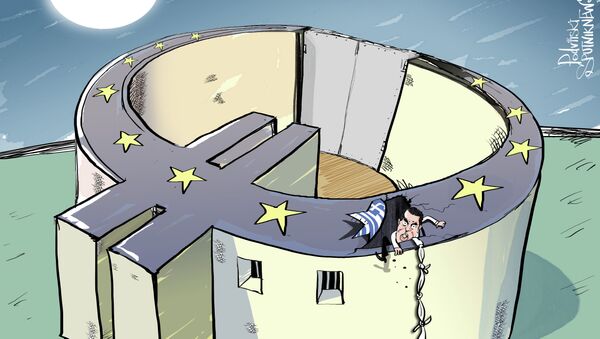 © Sputnik / Vitaly Podvitski
Subscribe
The question on Greece's membership in the Eurozone has become the main concern for Europeans nowadays.

On July 8, Greek Prime Minister Alexis Tsipras announced to the European Parliament in Strasbourg that he has "very specific" proposals on Thursday to solve the country's debt issue.

"All of the political forces in Greece, the leaders, came around the same table, and we came up with a framework on the basis of which tomorrow we are going to, once again, to come up with some very specific proposals for a fair and sustainable solution which will bring about fair reforms as well," Tsipras said in a statement.

Tsipras was met with applause after his speech in which he praised the courage of the Greek people and pledged to continue to negotiate with Europe.

But it's still unclear what future awaits the Eurozone.