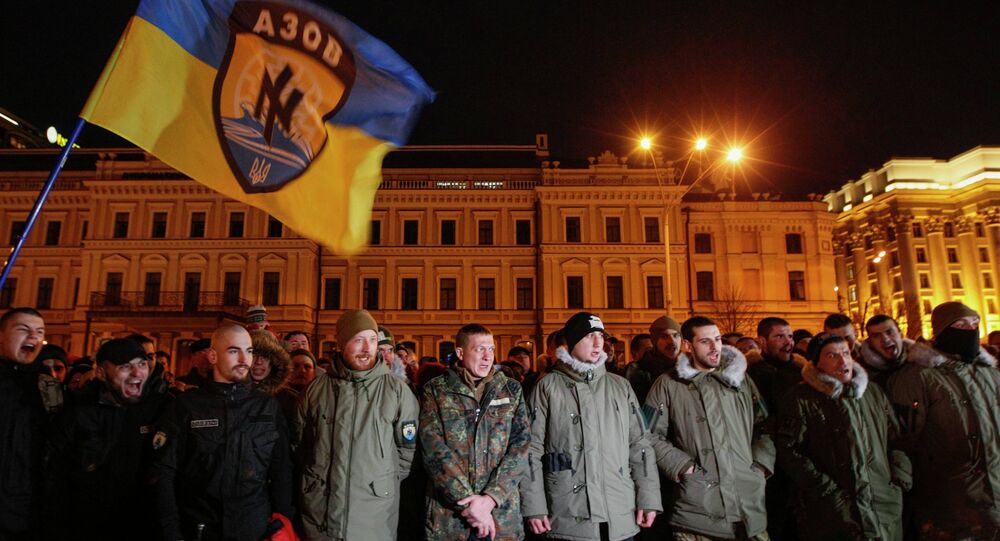 Experts say that sending Ukraine lethal weaponry would be like throwing gasoline onto a fire.

© AP Photo / Evgeniy Maloletka
US May Disrupt Peace Efforts in Ukraine With Training Kiev Troops - Experts
WASHINGTON (Sputnik) — Providing lethal defensive arms to Ukraine would sharply deteriorate the conflict in the region, and also can be beneficial to the upcoming US presidential campaign and defense industry contractors, experts told Sputnik.

“Many expert observers… believe that sending Ukraine lethal weaponry would be like throwing gasoline onto a fire,” Senior Fellow at American University in Moscow William Dunkerley told Sputnik.

The US House of Representatives introduced on Tuesday a bill that would authorize $1 billion in funds for training, equipping, and providing lethal defensive military aid to Ukraine through September 2017.

© AP Photo / Dmitry Lovetsky
Complex Political Process to Follow Ukraine Ceasefire – US Officials
The possibility of sending lethal arms to Ukraine is “quite obvious,” and makes one wonder whether bringing peace to Ukraine is the actual objective of the US government, Dunkerley said. “It is worth asking whose interests would be served by prolonging or escalating the Ukrainian crisis.”

Dunkerley explained that a contentious US presidential election campaign has begun, which shows politicians' hunger for campaign contributions. “A very unsettled world is a productive condition for possible corporate contributors, whose businesses are attached to the defense industry.”

The expert further noted that former government officials issued a report earlier in February urging the US government to send lethal weapons to Ukraine. “The authors are mostly people who have connections traceable to the Clinton family. It doesn't take an Einstein to figure out what that might add up to.”

The recently proposed bill to send lethal aid to Ukraine has good chances of being passed in both chambers of US Congress and signed by US President Barack Obama, he said, given the aggressive rhetoric by both Republicans and Democrats toward Russia as being “a direct danger to many European countries.”

© AP Photo / Efrem Lukatsky
Pentagon to Train Ukraine’s National Guardsmen
“I found that the major examples of this aggression given by the Obama administration and NATO turned out to be fabrications, however. Western media have given little or no attention to this discrepancy,” Dunkerley underscored.

Illinois College of Law professor Francis Boyle said the proposed legislation is “a very unfortunate and dangerous bill” that reflects the neoconservatives’ agenda.

The most dangerous provision in the bill is the “assistance to sustain military and national security forces of Ukraine,” which means equipping neo-Nazi paramilitary formations, Boyle told Sputnik.

“It is not just that they [the United States] are going to be giving lethal weapons to the Ukrainian military, but they actually are going to be arming these neo-Nazi right-wing groups Right Sector, Azov Battalion, and the rest of them. It is a horrendous piece of legislation,” Boyle said.

Another dangerous aspect of the bill is the provision calling for “securing Ukraine’s sovereign territory against foreign aggressors,” the expert said. “In theory, that could be used to attack Crimea, and try to take Crimea back.”

Moreover, Boyle called the US Defense Department’s decision to train Ukraine’s National Guard this spring a “camel’s nose in the tent, starting a US military intervention to Ukraine.”

Previous legislation passed by the US Congress and signed by Obama in December 2014 authorized $350 million to arm the Ukrainian military. The authorization has not been enacted by President Obama, who has so far only provided Ukraine with economic and non-lethal military support.

Peace by Negotiations, Not by Arming Ukraine – Moscow