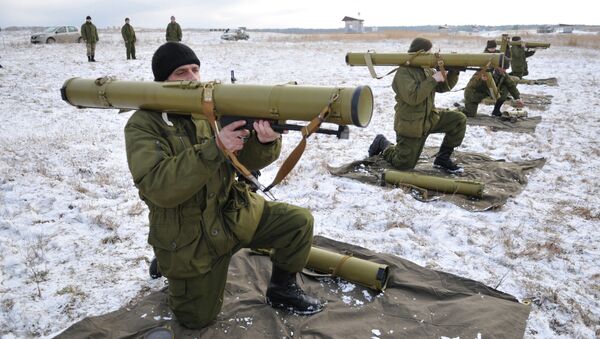 The US House of Representatives introduced new legislation Tuesday, authorizing military and lethal aid to Ukraine through 2017.

WASHINGTON (Sputnik) — The US House of Representatives introduced new legislation authorizing military and lethal aid to Ukraine through 2017, according to a US Congress announcement.

Obama Has Congressional Support to Arm Kiev if Minsk Talks Fail - Senator
“The Secretary of Defense is authorized, in coordination with the Secretary of State, to provide assistance, including training equipment, lethal weapons of a defensive nature, logistics support, supplies and services, and sustainment to the military and national security forces of Ukraine, through September 30, 2017," Tuesday’s legislation read. “To carry out the provisions of this act there are authorized to be appropriated $1,000,000,000. Amounts authorized to be appropriated under this subsection are authorized to remain available until September 30, 2017."

The bill, introduced by Representatives Adam Smith and Mac Thornberry, both members of the House Armed Services Committee, aims to secure Ukraine’s “sovereign territory against foreign aggressors,” and defend Ukrainians from attacks by “Russian-backed separatists,” according to the legislation. Additionally, the bill calls for having a negotiated settlement to “end the conflict” in Ukraine.

The West has repeatedly accused Russia of backing militias in the breakaway Ukrainian regions close to its borders, and supplying them with weapons, claims Moscow has denied.

The legislation states that no more than 10 percent of the funds can be “obligated or expended until not later than 15 days after” the secretaries of Defense and State submit a report detailing the description of the plan for providing assistance to Ukraine.

The plan that the secretaries are to submit would detail the types of training and equipment and the number of US Armed Forces will be involved and training locations.

World
US Considers Sending Lethal Aid to Ukraine
Meanwhile Adam Smith commented on the new legislation, saying that it is much more concrete than the 2014 Ukraine Freedom Support Act and directs US President Barack Obama to provide such aid to Ukraine: “It calls on the administration to specifically give lethal aid, basically use offensive weapons, where the other language was much narrower, and we see the administration used it in a much narrower fashion, giving non-lethal aid [to Ukraine].”

Smith noted that while the funds still need to be appropriated by the Congress, the new piece of legislation “definitely pushes it [provision of lethal weapons] further than previous pieces of legislation.”

House Armed Services Chairman Mac Thornberry said at a Tuesday press conference that the legislation will likely be met with bipartisan support on the Senate side.

“I detect no disagreement at all that we should do this,” Thornberry said of his colleagues in the Senate giving their support to providing lethal defensive aid to Ukraine.

Stoltenberg Says Each NATO State Must Decide on Kiev Lethal Aid on Its Own
The $1 billion figure the United States would provide to Ukraine if the bill is passed was derived from a recent think tank report drafted by former Obama administration officials and two former Supreme Allied Commanders of NATO, Thornberry noted. The sentiment to provide defensive weaponry to Ukraine is “a consensus of opinion on the Hill and off the Hill,” he added.

Previous legislation passed by the US Congress and signed into law by US President Barack Obama in December 2014 authorizing $350 million to arm the Ukrainian military. However, the authorization has not been enacted by President Obama who has so far only provided Ukraine with economic and non-lethal military support.