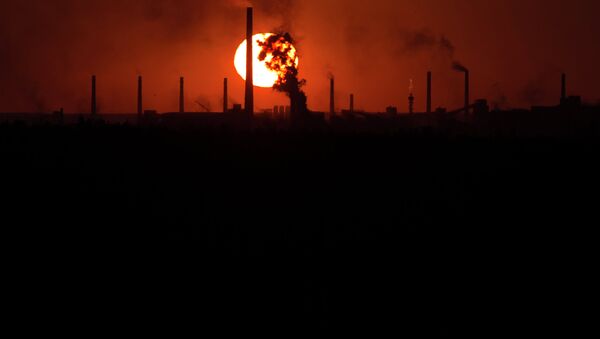 © AP Photo / Dmitry Lovetsky
Subscribe
Senior US officials said that the recent ceasefire agreement in Ukraine was the beginning of a very complex political process.

Minsk Agreements to Be Ratified by Donbas People’s Councils – DPR Envoy
WASHINGTON (Sputnik) — The ceasefire agreement between the Ukrainian government and independence supporters in eastern Ukraine reached on Thursday in Minsk will be the beginning of a long process to find a political solution to the conflict, senior US officials said.

“The first thing is to have a real ceasefire and pullback creating a broad zone of peace…but after that comes this very complex political process,” a senior US official said on Thursday.

The leaders of France, Germany, Russia, Ukraine and representatives from Donetsk and Luhansk struck a deal in the Belarussian capital Minsk to implement a ceasefire in eastern Ukraine that aims to pave the way for a political settlement of the Ukraine crisis.

Normandy Quartet to Discuss Implementation of Minsk Agreements - Hollande
The ceasefire will go into effect on Saturday night: heavy weapons will be withdrawn over two weeks starting on February 17, and prisoners will be exchanged and foreign forces will be withdrawn from Ukraine, according to the 13-point Minsk agreement.

The Organization for Security and Cooperation in Europe (OSCE) will monitor the ceasefire and withdrawal of heavy weapons.

If the fighting halts, it could pave the way for a political solution to the Ukraine crisis whereby Kiev will draft a new constitution granting the Donetsk and Luhansk people's republics special status, while giving Ukraine control over the border with Russia by year’s end, according to the agreement and senior US officials.

Moreover, elections would be held in Donetsk and Luhansk, according to the plan.

The political aspects of the deal “will require a lot of continued negotiation among parties,” senior US officials said.

A fully implemented ceasefire will allow Kiev to “pull back from being on war footing,” giving the government “a lot more breathing space” to implement the reforms in the agreement as part of a political solution to end the conflict, they said.

US officials suggested any breakdown in the ceasefire would lead to increased pressure on Russia, including new sanctions and possibly arming Ukraine with lethal weapons.

The United States, European Union and other countries imposed several rounds of sanctions against Russia over its alleged meddling in Ukrainian affairs, but Russia has repeatedly denied the allegations.

Sanctions relief for Russia will come, they said, once Thursday’s agreement and a previous agreement in Minsk signed in September are fully implemented.

An earlier ceasefire agreement signed in Minsk in September broke down as fighting erupted between government forces and the rebels, who then expanded areas under their control. More than 5,300 people have been killed in nearly 9 months of fighting in eastern Ukraine, according to the United Nations.