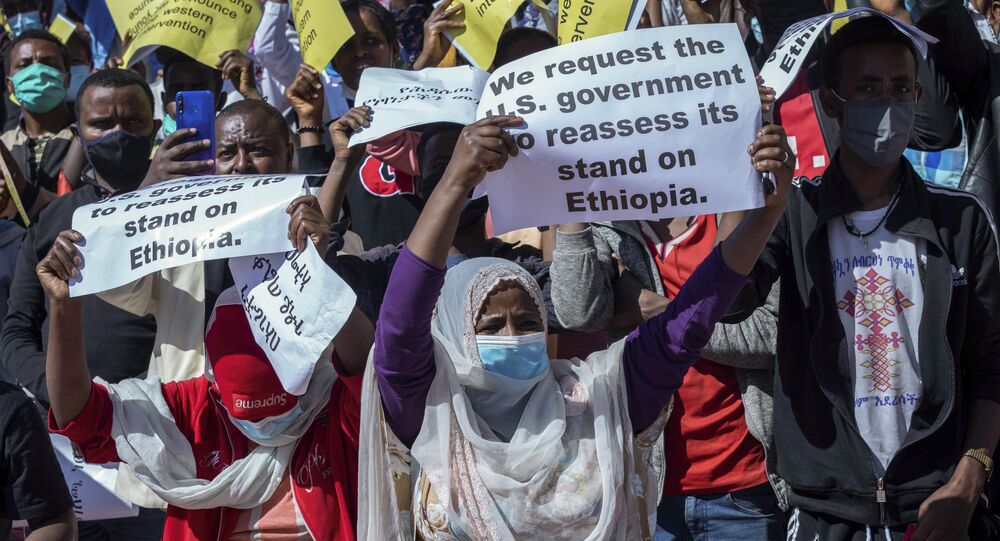 During the Cold War the United States and the Soviet Union took it in turns to seduce African nations. Ethiopia was at one point an American ally but nowadays what Washington wants increasingly falls on deaf ears.

Tens of thousands of Ethiopians demonstrated in the capital, Addis Ababa, on Sunday, 30 May, days after US President Joe Biden imposed economic and security sanctions on the country because of the conflict in the Tigray region.

Protesters packed a stadium and chanted slogans in support of the government of Prime Minister Abiy Ahmed and against US interference.

Last week, on 26 May, President Biden issued a statement in which he said: “I am deeply concerned by the escalating violence and the hardening of regional and ethnic divisions in multiple parts of Ethiopia. The large-scale human rights abuses taking place in Tigray, including widespread sexual violence, are unacceptable and must end.”

​But the Mayor of Addis Ababa, Adanech Abiebe, told the rally on Sunday: "We will not submit. The US and its allies have to stop and consider the wisdom, as well as correct the preconditions, they have imposed on our internal affairs."

Ethiopia is an ethnic jigsaw puzzle of different tribes - Amhara, Oromo, Tigrayan, Sidama, Gurage, Wolayta and Somali. Meles Zenawi and a Tigrayan elite ruled the country but they began to lose their grip on power after his death in 2012.

Zenawi’s Tigrayan People’s Liberation Front (TPLF) bore the brunt of the fighting which ousted the Soviet-backed government in 1991 and was also at the heart of the 1998-2000 war with Eritrea over the Badme triangle.

© AP Photo / Mulugeta Ayene
Ethiopians protest against international pressure on the government over the conflict in Tigray.

When Abiy Ahmed came to power in 2018 he made peace with Eritrea over the Badme triangle conflict and was even awarded the Nobel Peace Prize in 2019.

But his Amhara-dominated government resented the TPLF’s continued power in Tigray and in November 2020 Ethiopian and Eritrean troops moved into the region in a bid to crush the TPLF.

Although the Ethiopian Army have taken most of the main towns the TPLF continues to resist in the mountainous region and the conflict has affected agriculture and trade.

​On Monday, 31 May, an Ethiopian aid worker, Negasi Kidane, died after being struck by a stray bullet in the town of Adigrat, where Tigrayan forces are still fighting the Ethiopian Army.

In his statement Biden said: “Belligerents in the Tigray region should declare and adhere to a ceasefire, and Eritrean and Amhara forces should withdraw.”

But Addis Ababa is ignoring the US, largely because the Ethiopian economy has much stronger ties with China, which built railways and other infrastructure.

Abiy denounced the US sanctions as "meddling in our internal affairs" and said Ethiopia would reassess its bilateral relationship with Washington.

TPLF admitted in their own words, preemptively attacking the Ethiopia defense force, killing thousands. They are responsible for all the damages and distraction that followed as a result of their miscalculation and irresponsible action. @UN #EritreaPrevails #TplfLies @ABlinken pic.twitter.com/2z2QObk9nQ

​In the 1980s Ethiopia was in the Soviet camp and the US was an ally of neighbouring Somalia between 1978 and 1991 when dictator Siad Barre was ousted.

After the Derg was ousted by the TPLF and its allies in 1991 the new Ethiopian President, Meles Zenawi, improved relations with the US but in 2000 he opened the door to Beijing.

Between 2000 and 2014 China loaned US$12 billion to Ethiopia for various infrastructure projects, including shoe factories, and Ethiopia imports most of its consumer goods from China.

Although Abiy Ahmed went on a goodwill trip to the US in 2018 Addis Ababa does not need the US, and although economic sanctions are annoying, they will not derail the economy or force Abiy Ahmed to change his policy on Tigray.

The Office of the Prime Minister wishes to affirm that supposed leaked audio of Prime Minister @AbiyAhmedAli during Prosperity Party meeting of last week is a FAKE audio compilation which has been put together by drawing on different unrelated remarks made by the PM. 1/2

​The crowd at Sunday’s rally also waved banners in support of the Grand Ethiopian Renaissance Dam, a project which has enraged both Egypt and Sudan, who fear it will affect the flow of the Blue Nile further downstream.

But Ethiopia, which has financed the project with Chinese loans, has said it will push ahead with a second phase of the dam in July even if no agreement can be reached with Sudan and Egypt, which concluded six days of war games on Monday.

The Sudanese government issued a statement which said, rather ominously, the joint exercises would help "strengthening bilateral relations and unifying methods on dealing with threats that both countries are expected to face."

Earlier this year Sudanese and Ethiopian forces clashed in the Fashaga Triangle, on the border.

After the military ousted President Omar al-Bashir Sudan has recently “come in from the cold” after years of support for Islamists.

Sudan recently recognised Israel and, along with Egypt, is the nearest thing the US has to an ally in the region.