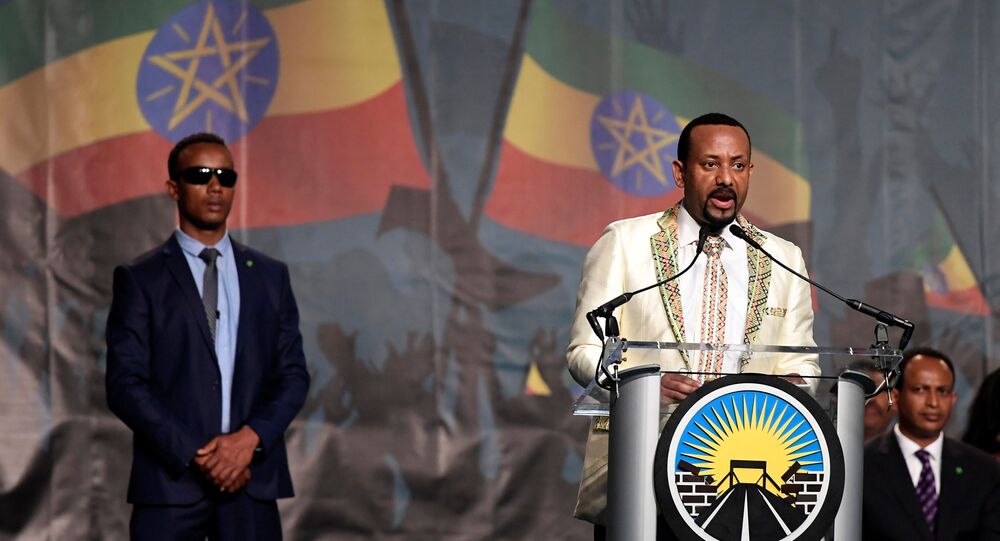 As Ethiopian PM Rounds Off US Tour, What Lies Behind 'Soft Coup' in Addis Ababa?

Ethiopia's Prime Minister Abiy Ahmed has been in power for only four months but already he has signed a peace deal with Eritrea and released political prisoners. Sputnik spoke to Negasi Tesfaye, a political observer in Addis Ababa, about what lies behind the changes.

Abiy Ahmed, 41, made peace with neighbouring Eritrea after relinquishing Ethiopia's claim over the Badme Triangle — an arid and mountainous strip of territory which had claimed the lives of more than 100,000 military conscripts on both sides.

He also plans to loosen the government's tight grip on strategic sectors after decades of socialist central planning and authoritarian rule, firstly by The Derg and most recently by governments dominated by the Tigrayan People's Liberation Front (TPLF).

Honored to meet with Prime Minister Dr. Abiy Ahmed of Ethiopia today at the @WhiteHouse. I applaud his historic reform efforts, including improving respect for human rights, reforming the business environment, and making peace with Eritrea. pic.twitter.com/kCXjHaQ6Zb

Mr. Ahmed visited the Ethiopian diaspora community in Los Angeles and Minnesota on Monday, July 30, after spending the weekend in Washington DC, where he met US Vice President Mike Pence.

But his visit to the US has been overshadowed by the assassination of the chief engineer responsible for a huge dam on the Blue Nile on Thursday, July 26.

Rise Of The Oromos

Negasi Tesfaye, a political observer in Addis Ababa, said Mr. Ahmed's rise was partly due to a power struggle between Ethiopia's Oromo tribe and its Tigrayan rivals.

"Abiy Ahmed came to power on the back of Oromo protests and Qeeroo (Oromo youths) who have made Oromia region ungovernable for the ruling TPLF for two years. They wanted an end to Tigrayan domination of the economy, military, intelligence, diplomatic and political positions. Now Abiy Ahmed is consolidating his grip on power by firing Tigrayans and appointing Oromos in key positions," Mr. Tesfaye told Sputnik.

HE PM Abiy Ahmed addressed a gathering of Ethiopian North American Muslim Foundation (BADR) in US, Virginia. In his remark, he said the ideals of love, forgiveness and reconciliation provide a true foundation for peaceful, democratic and prosperous #Ethiopia. (1) pic.twitter.com/8aUzXOFwNJ

"Behind the scenes there was definitely involvement of the US State Department and the United Arab Emirates in orchestrating a ‘soft coup' in Ethiopia to expel the Chinese from the Horn of Africa and punish Djibouti for expelling (Dubai-owned) DP World (which had run its container terminal)," Mr. Tesfaye told Sputnik.

On Sunday, July 29, there were disturbances in Addis Ababa as thousands of Ethiopians attended the funeral of Simegnew Bekele, the chief engineer of the $4 billion Grand Renaissance Dam, who was murdered on Thursday, July 26.

The dam, near the border with Sudan, will be Africa's largest when completed and will produce 6,000 megawatts — the equivalent of six large nuclear reactors — has raised the hackles of Egypt, which is heavily dependent on the waters of the Blue Nile and feared the dam would affect the flow.

Ethiopian Prime Minister Dr. Abiy Ahmed speaks to a packed room of Muslim women and men from all over the United States in Washington, D.C. The energy and spirit in this room is incredible. pic.twitter.com/piblWG8U4y

"The murder of Simegnew Bekele was meant to send a bold and threatening message to the Ethiopian people. There is so much confusion, anger, frustration and conspiracy surrounding this event," Mr. Tesfaye told Sputnik.

"This assassination happened in the center of Addis Ababa, in a popular location called Meskel Square, which is usually guarded 24/7 and recorded with surveillance cameras. But they were disabled, due to ‘road construction', which is suspicious," Mr. Tesfaye told Sputnik.

"Whoever lured the engineer on Thursday morning knew about the camera situation. The gun was placed in the vehicle by the assassin to deceive the public into thinking he committed suicide. But the bullet wound that killed him was behind his head, just behind his right ear," Mr. Tesfaye told Sputnik.

"There are many potential suspects in this case — Egypt and (President Abdel Fattah) Sisi, Eritrea, the TPLF, Abiy Ahmed, or other foreign agents. Egypt has repeatedly claimed that any threat of reduction to the Nile water is a red line. Sisi himself raised extreme concern about the Nile dam in January (when he met the then Ethiopian prime minister)," Mr. Tesfaye told Sputnik.

"Many Ethiopians believe the assassination was carried out by the TPLF. The reason they give is because TPLF are trying to sabotage Abiy Ahmed's new administration and frustrate efforts of reform in Ethiopia. They have also claimed that TPLF is involved in deep corruption involved with the bond money collected on behalf of the dam, which they say was stolen. They believe the assassination of the engineer was meant to silence him before he went public with the corruption allegations," Mr. Tesfaye told Sputnik.

"There's also rumors that security guards and a chauffeur were removed from Bekele just days before he was killed. He was ordered not to give interviews according to some social media users, which explains why he sounds so nervous in his final interview in BBC Amharic just one day before his murder," Mr. Tesfaye told Sputnik.

PM Abiy said few days ago that the Grand Renaissance Dam may not be completed even in 10 years time now! Engineer Simegnew Bekele had a program today to lead a team of journalists to the site and brief them about the progress of the Dam! Early in the morning, he was found dead! pic.twitter.com/WBwLany8gu

He said it was also odd that Mr. Ahmed did not cut short his trip to the US to return for Bekele's state funeral on Sunday, July 29.

"The United Arab Emirates gave Abiy Ahmed billions in financial aid and was one of the major players behind bringing reconciliation to Ethiopia and Eritrea. UAE and Egypt have a close alliance in the region along with Saudi Arabia. This could have been a co-ordinated effort. We are getting very few investigation details from the federal police commissioner, leaving everyone in the dark….It is a giant mystery," Mr. Tesfaye told Sputnik.

Only The Tigrayans Cared About the Badme Triangle

Mr. Tesfaye said after the 1998-2000 border war between Ethiopia and Eritrea the then Prime Minister, Meles Zenawi, negotiated a deal in Algiers without consulting the local Irob people or others within the ruling EPRDF coalition.

"When we lost the EEBC (Eritrea Ethiopia Boundary Commission) ruling on Badme this infuriated all Ethiopians, especially the Tigrayans. But now after 27 years of TPLF rule, the Oromos and Amhara do not care about the border nor Badme, as they want to access the sea outlet Eritrea offers by any means necessary. They have limited to no use for Badme, even though thousands of our soldiers died and were buried there," Mr. Tesfaye told Sputnik.

"When Abiy Ahmed lifted the state of emergency, possibly prematurely, and removed the Oromo Liberation Front from the terror list on June 30 before they had disarmed, this gave them the green light to operate in Ethiopia. Since the beginning of July I have seen photos and videos coming out of Moyale (a town on the border with Kenya) detailing Oromo militia targeting Somalis for ethnic cleansing," Mr. Tesfaye told Sputnik.

In pictures: Funeral service to Simegnew Bekele (Eng.), the manager of the Grand Ethiopian Renaissance Dam, who was found dead in his vehicle at Meskel Square in Addis Ababa. pic.twitter.com/eVK1W8xd45

He said in one video the victims are clearly pointing the finger at Lemma Megersa, the Oromia regional president.

"The silence of Abiy Ahmed on these crimes in Moyale and Babile (in the Ogaden region) seems to be silent consent. He made a weak statement three weeks after the violence started in Hawassa when (Eritrean President) Isaias Afewerki visited, saying he will send federal police to the border to calm tensions. Somali social media users say those same federal police are aiding the Oromo militias in land-grabbing Somali territory," Mr. Tesfaye told Sputnik.

The views and opinions expressed by  Negasi Tesfaye are those of the expert and do not necessarily reflect those of Sputnik.

Eritrea & Ethiopia: Hope for the Horn of Africa

Blast at Rally in Support of Ethiopia's New PM Kills One, Injures 132 (PHOTOS)