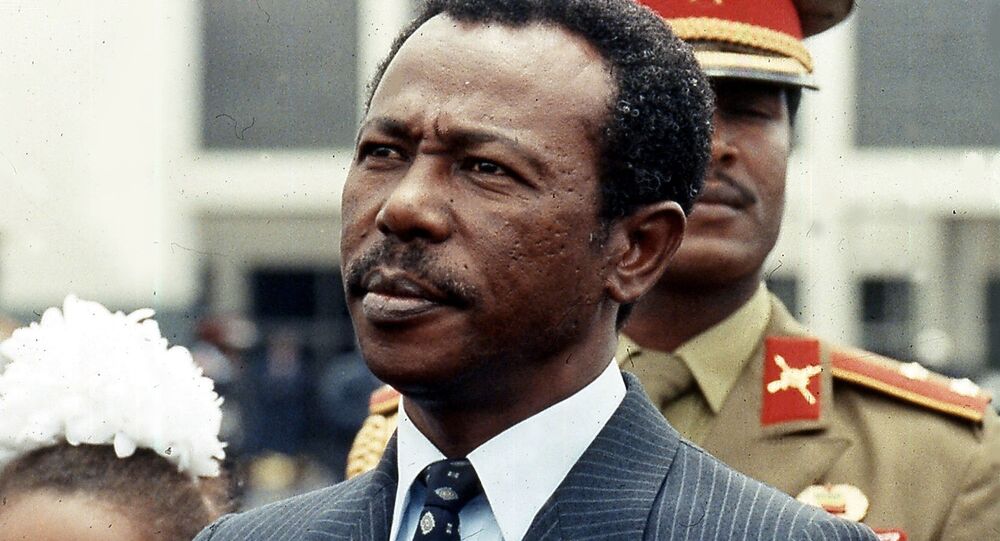 'He is Being Protected': Will Mengistu Ever Face Justice in Ethiopia?

Pressure is being exerted on Zimbabwe to extradite Ethiopia's former military dictator, Colonel Mengistu Haile Mariam, to face trial for genocide and other crimes. Sputnik spoke to an Ethiopian political observer, who wished to remain anonymous, about how Mengistu is viewed.

When the left-wing Ethiopian government known as The Derg, collapsed in 1991 and Mengistu fled across the border to Kenya it was Zimbabwean leader Robert Mugabe who stepped up and offered him exile.

Mugabe — who was paying back a favor after Mengistu allowed Mugabe's ZANLA guerrillas to train in Ethiopia in the 1970s — fell from power in November last year and there have been questions asked about what it would mean for Mengistu, who is now 81.

Negasi Tesfaye, a political observer in Addis Ababa, said opinion was divided in Ethiopia about Mengistu.

"We still have a lot of victims who lost loved ones to the Mengistu regime and have still not given up on justice. There's slim hope because of Zimbabwe's new president protecting Mengistu and his family members in Harare," Mr. Tesfaye told Sputnik.

© REUTERS / Mike Hutchings
Zimbabwe's former Vice-President Emmerson Mnangagwa, who is due to be sworn in to replace Robert Mugabe as President, addresses supporters in Harare, Zimbabwe, November 22, 2017.

Zimbabwe's new President, Emmerson Mnangagwa, took over after his Crocodile faction won a power struggle with Mugabe's wife Grace, who was grooming herself to take over from the 94-year-old.

But critics say Mnangagwa himself has a shady past and many members of Zimbabwe's Ndebele tribe accuse him of being behind the Gukurahundi massacres in 1983, when supporters of the opposition ZAPU party and their military wing, ZIPRA, were wiped out by government forces.

Andy Tsege, a British citizen and one of my constituents, has finally been pardoned after four years on death row in Ethiopia.

I hope Andy will be released from prison, brought home and reunited with his three children as soon as possible. https://t.co/EdYcQYTWjF

"Mnangagwa is probably protecting him because he offers the military and the Zimbabwean government consulting services on how to maintain power by any means," Mr. Tesfaye told Sputnik.

The Derg took power in 1974, ousting Emperor Haile Selassie and imposing a strict socialist regime, which was backed by the Soviet Union.

Mengistu Was Author Of The Red Terror

In 1977 during the Red Terror (Qey Shibir) thousands of political opponents of The Derg were massacred. Estimates of the number killed vary from 30,000 to 750,000 and most were ironically fellow leftists, mainly supporters of the Ethiopian People's Revolutionary Party, not to be confused with the Ethiopian People's Revolutionary Democratic Front (EPRDF) which currently rules Ethiopia.

"There are Derg remnants here who would like to bring back the Mengistu regime and overthrow the current EPRDF government," Mr. Tesfaye told Sputnik.

"It's a very polarizing subject. There are two extreme points of view. I don't think you will find many Ethiopians and Eritreans who are neutral on the issue," he told Sputnik.

"Ethiopia has been trying to extradite him ever since Mugabe resigned, though I don't know if the Ethiopian government has made a formal extradition request," Mr. Tesfaye told Sputnik.

Mugabe gave Mengistu a residency permit when he arrived in 1991 while Mengistu was sentenced to life in prison in absentia by an Ethiopian court. Ethiopia formally requested his extradition in 2006 but Zimbabwe refused.

Mengistu, and Haile Selassie before him, had managed to hold together Ethiopia as a nation but in the 1980s ethnic nationalist rebel movements in the northern provinces of Eritrea and Tigray rose up against domination by Addis Ababa.

The Eritreans finally declared independence in May 1991 but the Tigrayan People's Liberation Front (TPLF) became the dominant force in the EPRDF, which swept Mengistu and the Derg from power.

Ethiopia is a mosaic of tribes with the largest being the Amhara and the Oromos.

"To a large extent the military is still dominated by Tigrayans but the EPRDF is being reformed to give the Oromos more autonomy and control. The Amharas are still sidelined by this marriage of convenience. Tigrayans cannot the rule majority forever by themselves so they need the help of the Oromos," Mr. Tesfaye told Sputnik.

He said the EPRDF were helped by the fact that the Ethiopian economy is doing well.

The views and opinions expressed by  Negasi Tesfaye are those of the expert and do not necessarily reflect those of Sputnik.