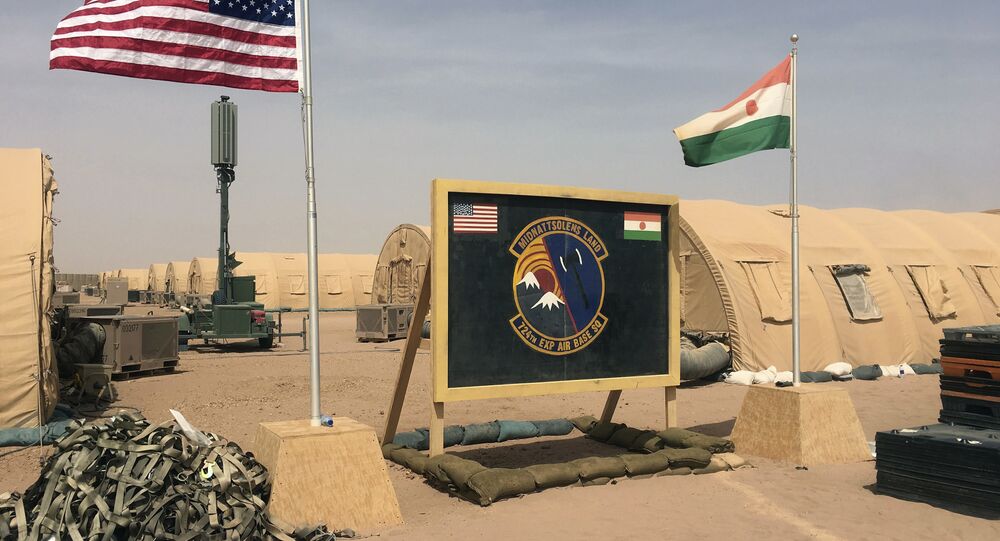 Earlier, US National Security Advisor John Bolton accused Moscow and Beijing of “deliberately and aggressively” attempting to extend their “predatory” influence over the African continent, and said that all US efforts were aimed at “further[ing] US priorities in the region.”

Previously unpublished written Congressional testimony by Marine Corps General Thomas Waldhauser, former head of US Africa Command (US AFRICOM), and Army General Stephen Townsend, who replaced him at the post late last month, shows growing concerns among the Pentagon over Russia and China’s growing diplomatic, economic and military influence over Africa, The Intercept has reported.

By statistics alone, China seems to be the larger prospective ‘problem’ for Washington, given the country’s whopping $170 billion in trade with the continent in 2017 (compared with $39 billion for the US the same year), and the membership of 39 of Africa’s 54 states as partners in China’s ambitious Belt and Road infrastructure plan. Russian trade with the continent amounted to $17.4 billion in 2017, with projects focusing on nuclear power, technology, oil and gas, and has grown over three-fold since 2009. A similar trend has been observed in Russian and Chinese cultural influence, according to the Pentagon, with Chinese government-sponsored Confucius Institutes and Russia’s Russkiy Mir Foundation said to be operating in 20 and nine African countries, respectively. Russian and Chinese arms sales, security agreements, private military contractor operations, and the prospects of more Chinese bases on the continent alongside the existing base in Djibouti are another concern, AFRICOM fears.

LOOK AT THIS MAP! China in Africa – and the world: The blue circles on map pinpoint the location of thousands of Chinese-funded projects. The largest circles represent projects in the multibillion-dollar range.

Echoing Trump National Security Advisor John Bolton’s earlier claims about Russia providing military assistance in exchange for various economic partnerships, Waldhauser stressed that AFRICOM was working “with a host of partners to be the military partner of choice in Africa,” without specifying the exact nature of US activities.

PLA-Navy
Chinese Troops Drill Outside New Base in Djbouti

China Threatens to Push US Military Out

As far as China is concerned, Waldhauser warned that the country could inhibit US military access to Africa “within the next decade,” as the country moves to expand its military footprint on the continent.

“China is actively working with African partners to open new bases in several locations across the continent,” he wrote. “By working with other [African] nations…we may be able to ensure that when China or Russia do gain military access to ports, bases, or airspace, that they are unable to take full advantage of that access to threaten US freedom of maneuver in and around Africa,” the general stressed.

Townsend, meanwhile, took aim at China’s military aid to the continent, commenting on the need to point out the superiority of US-made weapons systems to the US’s African partners. “China has provided Nigeria with armed unmanned aerial systems…but the poor quality of the platforms has contributed to infrequent use. Low cost and short delivery timelines entice African partners to purchase Chinese equipment, but purchases frequently do not address the underlying military need. We need to tell this story to a greater extent,” he wrote.

Commenting on the senior Pentagon officials’ testimony, Temi Ibirogba, a researcher focusing on African affairs at the Center for International Policy, a Washington-based think tank, accused Gen. Waldhauser of hypocrisy. “Waldhauser’s claim…that non-African powers have a harmful influence in Africa is true – and the US is one of those powers,” she stressed, adding that, particularly in the last two decades, Washington’s “overly militarized” foreign policy “correlates to an increase in violence on the continent rather than deterrence.”

“American officials seem to have the false perception that American foreign policy is loved and welcomed by Africans, but it’s really the Chinese who are winning there at the moment,” she emphasised.

The US has waged dozens of campaigns, including regime change operations, coup d’états and outright military attacks in Africa since the Cold War, when it fought for ideological and geopolitical control of the continent with the USSR as countries gained their independence from the European colonial powers starting in the 1950s. These operations have continued into the present, with the US presently maintaining a troop presence in well over a dozen African countries, including Cameroon, Niger and Somalia, along with at least 34 military bases, including infrastructure for drone strikes. The US has claimed that many of its current operations are aimed at combating terrorism. However, a recent report by the Pentagon’s own Africa Centre for Strategic Studies has shown that Islamist violence on the continent has seen a dramatic spike in recent years, in spite of an increased troop presence.

Nobody really talks about the US presence in Africa, and I dunno why

They have like 3-4,000 troops at any one time, operating in almost every country out of at least 34 bases, including huge complexes launching drones across Africa and the Middle East pic.twitter.com/5wpymNND4t