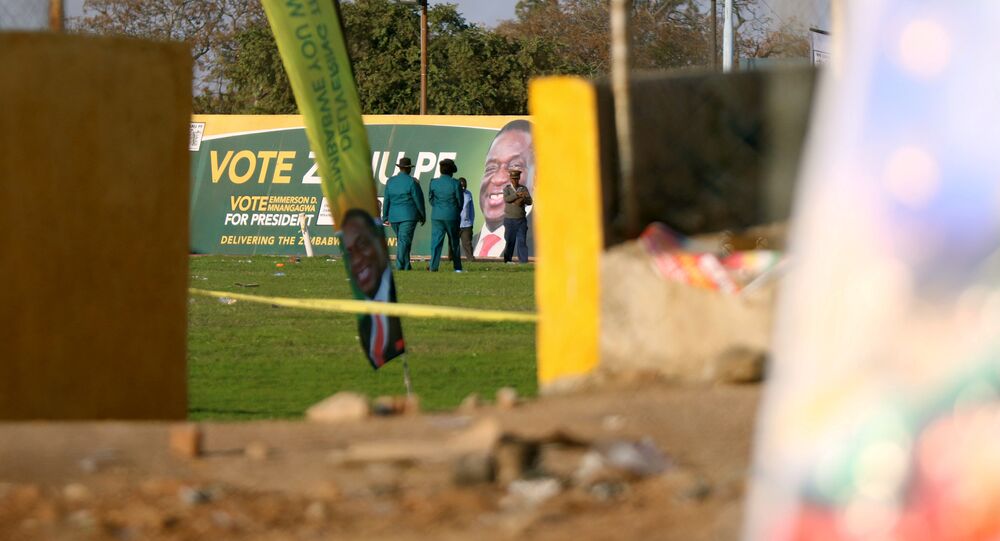 'Not My Time': Zimbabwean President Speaks About Explosion Inches Away From Him

Zimbabwean President Emmerson Mnangagwa survived an explosion that occurred at a ruling ZANU-PF party demonstration on Saturday. The politician, who was immediately evacuated from the scene, has not been hurt and vowed not to let "cowardly act to get in our way".

Constantino Chiwenga, one of Zimbabwe's vice presidents, and his wife were slightly wounded in the explosion, whereas the country's political commissar, Rugeje, has reportedly sustained injuries, Reuters reported, citing sources close to the president.

According to The Herald newspaper, Zimbabwe's other vice president, Kembo Mohadi, suffered leg injuries and the minister of water, environment and climate, Oppah Muchinguri-Kashiri, was also wounded in the blast.

Reacting to the incident Mnangagwa stated that the blast took place just inches away from him, but "it wasn't his time". He noted that this is not the first assassination attempt he experienced, adding that there were "so many" of them.

"The campaign so far has been conducted in a free and peaceful environment, and we will not allow this cowardly act to get in our way as we move towards elections," Mnangagwa stated in a Facebook post.

Footage shown by the state TV broadcaster depicts Mnangagwa who had just finished his speech and was ready to leave the stage. When the explosion occurred, the broadcast was interrupted by the provider.

As captured in Zimbabwe today.. at a rally addressed by the president pic.twitter.com/xW0EKOT42J

© AP Photo / Ben Curtis
Zimbabwe Seeks Closer Ties With China to Offset Western Sanctions, Debt
The incident took place amid preparations for the upcoming presidential and parliamentary elections in the country reportedly slated for July 30. The elections will take place for the first time since the end of the 37-year rule of former leader Robert Mugabe.

In November, Mugabe, 93, who served both as president and prime minister, stepped down. Mnangagwa, who previously served as vice president, was sworn in as Mugabe's successor. One of Mnangagwa's key promises was to revive the country's ruined economy, as well as hold free and fair elections.

Earlier in the day, a similar blast hit a rally in Ethiopia where the country's prime minister, Abiy Ahmed, was addressing supporters.

Zimbabwe to Vote for President, Parliament for First Time in 37 Years - Reports