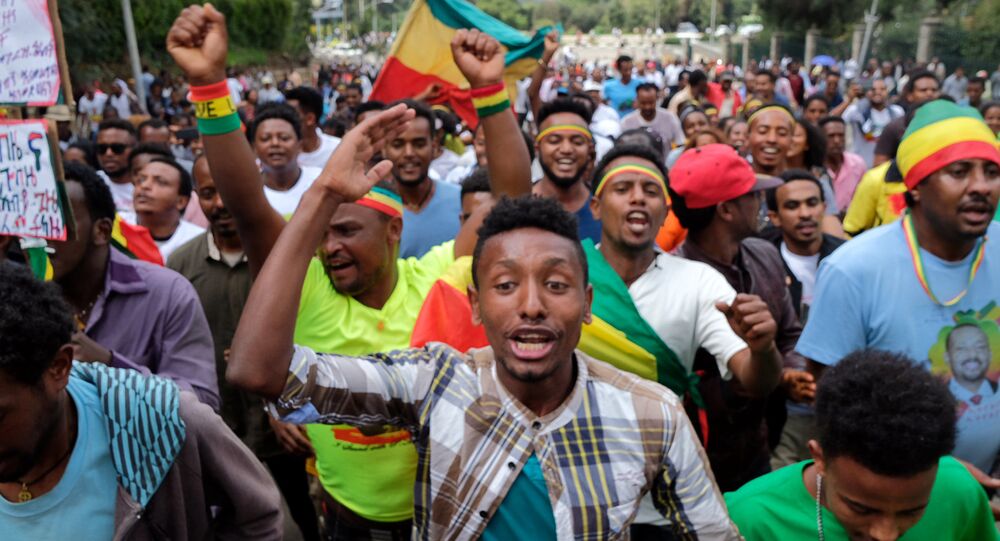 Blast at Rally in Support of Ethiopia's New PM Kills One, Injures 132 (PHOTOS)

The explosion happened in Meskel Square in Ethiopia's capital, Addis Ababa, after Prime Minister Abiy Ahmed finished addressing the crowd of his supporters and was prepared to leave the stage, waving to people.

"One person has passed away at Black Lion Hospital. I would like to pass my condolences to the family and Ethiopian people," Ethiopia's health minister Amir Aman said. The official added that 132 people were injured in a grenade attack during the pro-government demonstration.

Earlier in the day, the Prime Minister's chief of staff Fitsum Arega refuted previous reports that some people died in the blast, which disrupted a rally in support of the new prime minister, and confirmed 83 people injured. Previously, Abiy Ahmed in a televised address said that "a few people" had been killed and others got injuries as a result of the explosion.

According to the Prime Minister's chief of staff, the blast was caused by a grenade attack; however, no suspects have been identified yet.

"Some whose heart is filled with hate attempted a grenade attack. HE PM Abiy is safe. All the casualties are martyrs of love & peace. HE PM sends his condolences to the victims. The perpetrators will be brought to justice," Arega said.

Commenting on the blast later in the day, Ethiopian police stated that six suspects were under investigation for the attack.

Local media published alleged photos of the incident and reported that it was a hand grenade thrown at the police car.

#Ethiopia — It appears to be a hand grenade thrown at a Police Car. So far no death but wounded people. pic.twitter.com/4QS4gkWQF5

Ambulances and emergency services immediately rushed to the scene.

© REUTERS / Tiksa Negeri
New Ethiopian Prime Minister Unlikely to Tackle Regional Protests - Analysts
Abiy Ahmed was addressing Ethiopians wearing a T-shirt with a map of Africa and ex-South African President Nelson Mandela's "black power salute." According to the media, those gathered for the demonstration had clothes featuring the prime minister's image and carried signs saying "One Love, One Ethiopia."

The 42-year-old Abiy Ahmed, who took office only in April, already enjoys tremendous popular support as he's started an unprecedented wave of reforms in the country. The new prime minister has ordered the release of thousands of prisoners and negotiated a peace deal with Eritrea, Ethiopia's decades-long rival, as well as opened state companies to private investors.