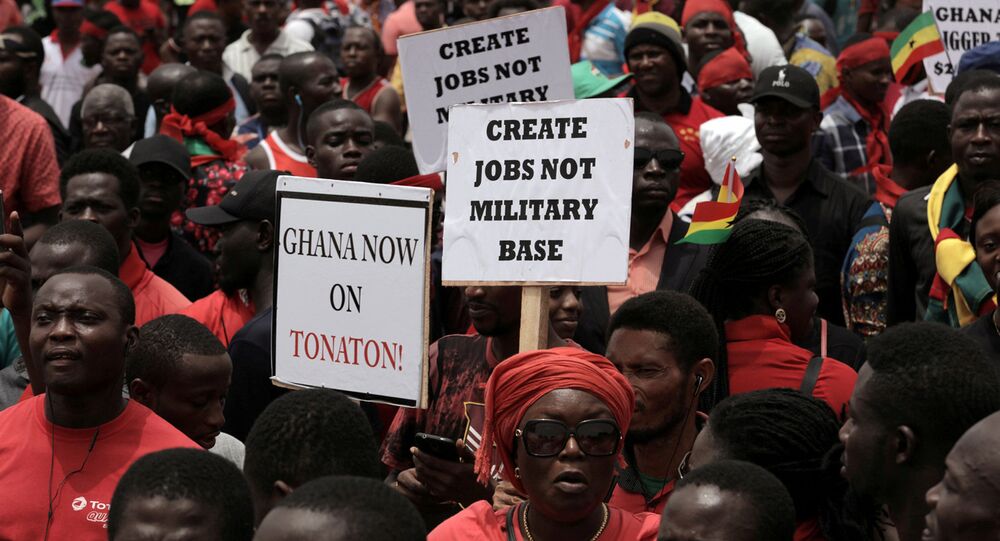 Thousands of Ghanaians demonstrated in the capital of Accra on March 28 against a defense agreement with the United States in which Washington would inject $20 million into the country’s military and grant the US “unimpeded” access to military facilities. Locals see the deal as an affront to their sovereignty.

Three thousand people in Ghana protested the defense agreement with the US, holding signs declaring "Ghana not for sale," and "legalizing the invasion of African sovereignty is a mockery to our independence," in response to the update to the 1998 Status of Forces Agreement Ghana-US defense agreement, which the new deal expands upon with the $20 million grant and other policies.

Joeva Rock, a writer and Ph.D candidate in Anthropology at American University, told Radio Sputnik's By Any Means Necessary that the protesters are right to be wary that the US will erode their independence.

​"This is the type of agreement that David Vine at American University and others describe as ‘a lily pad base,'" Rock told By Any Means Necessary hosts Sean Blackmon and Eugene Puryear. "So it's not necessarily the construction of something new but it's providing access to facilities that are already there. And this is how [US Africa Command] AFRICOM has really expanded its reach across the African continent. After it was started in 2007 by George W Bush, no African country offered to host it and so they've made their way through the continent with these types of agreements."

© REUTERS / Joe Skipper
US Military Deaths in Niger: Who, What Is AFRICOM?

The demonstration comes at a time of heightened scrutiny of the US's presence in Africa since an ambush in nearby Niger last October killed four US soldiers and five Nigerien soldiers, and wounded many more. Details about the ambush remain fuzzy.

They also come as citizens in a number of African nations have been riled over reports US President Donald Trump insulting their nations through words and deeds. Trump reportedly referred to several African and Caribbean countries as "shitholes," among other insults, in January. Last June, Trump reportedly said Nigerians in the US would have to return to their huts, offending many. Chad, which shares a border with Nigeria, was shocked to find they'd been added to the president's travel ban as they have been a longtime US military ally.

​"I think ‘Ghana First,' the slogan, is very much a jab at Trump and at the Ghanaian President Nana Akufo-Addo," Rock said. "Ghana first reflects of course President Trump's ‘America first' slogan and I think that there is, you know — if Trump thinks that we're a sh*thole country and he's putting America first, there's no way anything he brings us can really benefit us."

Opposition members of Ghana's parliament unanimously boycotted the vote on the defense agreement. In a statement, they said the deal was a "betrayal of the Ghanaian people by surrendering our sovereignty and threatening the peace and stability of Ghana."

© Sputnik .
Africa's Growing Importance in the Struggle Between East and West

The deputy general secretary of Ghana's opposition party, The New Patriotic Party, was charged with treason in late March for suggesting that the demonstrations against the agreement with the US could lead to civil revolt and the president's ousting.

Officials with the US Embassy in Ghana have said that the agreement would guarantee them storage structures and shipping containers and that the storage location would be used as a staging area for military drills as well as the storage of military equipment.

More details of the agreement have been distributed in Ghana than in the US and indicate that the US will also get access to Ghanaian radio frequencies, airport runways and more. Local officials say that those measures had already been in place for prior military exercises, according to the New York Times. US troops will also receive immunity on Ghana's soil and will be able to receive military equipment with a tax exemption.

"Ghana is a relatively young country. [It] gained independence in 1957, so you know we're only talking a few generations here and prior to that it had almost 500 years of exploitation, colonialism, the slave trade, slave raids, and those memories and that history very much lingers in everyday life," Rock said, "and so people are very attuned to relationships that they feel are exploitative or take advantage of their country."

The US Embassy in Ghana has been responding to critics of the defense agreement on Twitter. They cautioned one that while Ghana will be unable to prosecute US military officials for any crimes they commit in their country, that immunity is reciprocal.

In a statement on the day of the mass demonstration, the US embassy said, "the United States has not requested, nor does it intend to request, the establishment of a military base in Ghana or the permanent presence of US troops in Ghana. Reports alleging otherwise are inaccurate and misleading."

According to a highly classified internal 2015 planning file from AFRICOM, the US maintains 36 outposts in 24 African nations. As of April 2017, that number is now as high as 46. The document listed one such location in Accra, Ghana.

AFRICOM's then-chief, Gen. David Rodriguez, said in 2015 that Ghana is playing a key role as a host to a military outpost.

While Ghanaians protest over the plan for what appears to be a second installation, their economy is also undergoing a transformation. The International Monetary Fund, World Bank and The Brookings Institute, a DC-based foreign policy think tank, all say that Ghana may have one of the fastest growing economies in the world this year. According to projections, it may be number three for 2018. The growth comes following the discovery of vast oil reserves off Ghana's shore and an uptick in production.

"When it [AFRICOM] was created by President George W Bush in 2007, one of its early hotspots was the Gulf of Guinea, which is a part of the sea that lines the western coast of Africa. This is also where a lot of oil reserves are," Rock said. "In the last 10 years, AFRICOM and Ghana and other coastal partners annually conducted naval training — in fact, a huge naval training just wrapped up a few weeks ago."

"I don't think it's a coincidence that, you know, under George W Bush and all of his connections and his administration's connections with big oil that there was interest in the Gulf of Guinea and that today there are three US oil companies operating in Ghana, including Kosmos Energy, Exxon Mobil and Halliburton," Rock told Sputnik.

Since 1992 when it drafted a new constitution, Ghana has often been considered the most stable country in Western Africa. Ghana was also the first independent African country. In the book "In Search of Enemies," former CIA intelligence officer John Stockwell wrote that dissidents against Ghana's first president, Kwame Nkrumah, who overthrew him in a coup d'etat in 1966, were given a "generous budget" by the CIA and that "the Accra station was nevertheless encouraged by headquarters to maintain contact with dissidents."

In a highly classified memo from 1966, then-Assistant for National Security Affairs R W Komer wrote that, "The coup in Ghana is another example of a fortuitous windfall. Nkrumah was doing more to undermine our interests than any other black African," according to the US Office of the Historian.

"People are very attuned to Nkrumah's teaching. He wrote that military aid is kind of the last stage of imperialism, and of neocolonialism," Rock observed. "So very much this term of colonialism, or neocolonialism is on the lips of many Ghanaians."