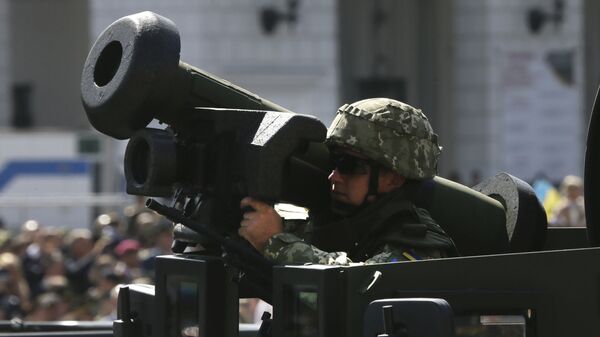 UPDATES: US Reportedly Mulling Expanding Training of Up to 2,500 Ukraine Troops Per Month in Germany

Subscribe
International
India
Africa
Russia launched the special military operation in Ukraine in February, after Kiev increased attacks against the Donetsk and Lugansk people’s republics. In response to the op, western countries have imposed sanctions against Moscow, and started providing Ukraine with military and financial aid.
Russia has been targeting Ukraine's military and energy infrastructure in high-precision strikes since October 10, in retaliation to multiple attacks on Russian infrastructure - including the deadly bombing of the Crimean Bridge, carried out by Kiev's special forces.
According to Kiev, almost half of the country's energy system has not been operating due to missile strikes.
Follow Sputnik's Live Feed to Find Out More!
Table of contents
New firstOld first
03:52 GMT 01.12.2022

World
Report: Spain's Arms Firm Gets Package Similar to One Exploding Near Ukraine's Embassy
23:03 GMT 30.11.2022
US Reportedly Mulling Expanding Training of Up to 2,500 Ukraine Troops Per Month in Germany
The United States is considering expanding its training of the Ukrainian military that may include drills for up to 2,500 troops monthly at a US base in Germany, US media reported.
Citing sources, CNN reported the United States under the proposed program would train much larger groups of Ukrainian troops in more sophisticated battlefield tactics.

The Defense Department and the US European Command did not immediately respond to Sputnik for comment on this matter.

The Biden administration is still conducting an interagency review of the proposal but the coming winter may provide an opportunity to launch the program as fighting in Ukraine is expected to slow during the colder months ahead, the report said.

Germany has not received an official request from the United States about the proposal to boost training of Ukrainian troops but the plan is in line with Berlin's endeavors to support Ukraine, the report added citing a German official.
22:31 GMT 30.11.2022
Spanish Court Reportedly Intends to Consider Blast Near Ukrainian Embassy as Terrorist Act
The Spanish National Court (SNC) is set to initiate trial proceedings in connection with the explosion that occurred near the Ukrainian embassy in Madrid on Wednesday, and will regard the incident as a possible terrorist act, the Spanish news agency EFE reported, citing sources.
The incident occurred at around 13:00 local time (12:00 GMT). An employee of the Ukrainian embassy in Madrid was slightly injured in the explosion of a device hidden in a parcel, which was first reported as a mail envelope.
The court will initiate a case after receiving a report on what happened from the police, the media said, specifying that the judge considers the incident to be a terrorist offense, since the envelope was addressed to Ukrainian Ambassador to Spain Serhii Pohoreltsev.
18:37 GMT 30.11.2022
UN Says Decision to Rebuild Ukraine From Russian Frozen Assets in Hands of States
The United Nations is aware of the European Commission's proposal to create a special tribunal to rebuild Ukraine from Russian frozen assets but says that all decisions are in the hands of the states, UN Spokesperson Stephane Dujarric said on Wednesday.

"The Secretary-General is aware that discussions are taking place at various fora concerning the possible establishment of an international tribunal in regard to the situation in Ukraine and particularly on the issue of the crime of aggression" Dujarric told the briefing.

Any such decision, however, with or without the involvement of the United Nations is in the hands of the member states, he added.

Earlier on Wednesday, President of the European Commission Ursula von der Leyen proposed to create a special structure to manage the frozen assets of the Russian Central Bank and private assets to support Ukraine.

In response to von der Leyen's proposal on Russian assets, Russian Foreign Ministry spokeswoman Maria Zakharova said that Moscow will take adequate measures in response if these assets are confiscated.
16:31 GMT 30.11.2022
Ukrainian Foreign Minister Orders Stronger Security of Embassies Abroad After Madrid Blast
Ukrainian Foreign Minister Dmitry Kuleba has instructed his ministry to immediately strengthen the security of all Ukrainian embassies overseas after the explosion at the country's embassy in Madrid, the ministry's spokesman Oleg Nikolenko said on Wednesday.

Earlier in the day, a Spanish newspaper reported that an employee of the Ukrainian embassy in Madrid was slightly injured in the explosion of a device hidden in a mail envelope.

According to the spokesman, Kuleba noted that whoever was behind the organization of this explosion, they will not succeed in intimidating Ukrainian diplomats.
16:06 GMT 30.11.2022
US Believes Military Operations in Ukraine Will Persist Through Winter Months
The United States expects military activities to continue and persist in Ukraine during the winter, however, some operations will be curtailed because of the weather, National Security Council spokesperson John Kirby said on Wednesday.

"We absolutely believe that military operations will persist through the winter months, it's just going to be probably... some things will be curtailed or altered based on the weather conditions," Kirby said during a press briefing.
14:33 GMT 30.11.2022
14:27 GMT 30.11.2022
Great Britain Expands Its Anti-Russian Sanctions List
13:41 GMT 30.11.2022
Stoltenberg: Ukraine Should Focus on Preserving Sovereignty Instead of Joining NATO

Stoltenberg: Ukraine Should Focus on Preserving Sovereignty Instead of Joining NATO
13:35 GMT 30.11.2022
EU Most Likely to Impose $62 Per Barrel Price Cap for Russia Oil, Source Says

Energy Crisis in Europe
EU Most Likely to Impose $62 Per Barrel Price Cap for Russia Oil, Source Says
13:23 GMT 30.11.2022
One Person Injured in Explosion at Ukrainian Embassy in Madrid - Reports
An employee of the Ukrainian embassy in Madrid was slightly injured in the explosion of a device hidden in a mail envelope, the 20 Minutos newspaper reported on Wednesday, citing sources.
The device exploded around 13:00 in the afternoon (noon GMT). At this time, police officers received a notification of a fire at the Ukrainian Embassy in Madrid.
The employee was reportedly sent to the hospital after being injured.
13:11 GMT 30.11.2022
MoD Releases Video of Russian Grad MLRS in the LPR
12:46 GMT 30.11.2022
NATO's Bucharest Talks Show Alliance Not Seeking Political Solution in Ukraine - Moscow
The results of the latest meeting of the NATO foreign ministers in Bucharest showed that the alliance is not interested in a political and diplomatic solution in Ukraine, Russian Foreign Ministry spokeswoman Maria Zakharova said on Wednesday.

"I cannot ignore the statement of the foreign ministers of the NATO member countries. This statement was adopted during a meeting of the alliance council at the level of foreign ministers from November 22-30 in Bucharest. The wording contained in the document indicates that NATO is absolutely not interested in a political and diplomatic solution in Ukraine," Zakharova told reporters.

12:04 GMT 30.11.2022
Russian Intel Chief Naryshkin Says He Discussed Nuclear Security and Situation in Ukraine With CIA Head Burns
Russian Foreign Intelligence Service Director Sergei Naryshkin confirmed to Sputnik on Wednesday that he held a meeting with CIA Director William Burns to discuss nuclear security and Ukrainian issues.
On Monday, US Charge d'Affaires in Moscow Elizabeth Rood told Sputnik that Russia and the US have a channel to discuss nuclear risk management at the level of special services, and that Burns and Naryshkin can hold talks again, if necessary.

"For my part, I confirm Ms. Rood's statement. Additionally, I can note that the most frequently used words at this meeting were 'strategic stability,' 'nuclear security,' 'Ukraine' and 'Kiev regime," Naryshkin said.

Russia
Moscow: Brussels Frantically Trying to Steal Frozen Russian Assets
08:48 GMT 30.11.2022
Ukrainian Forces Target Uglegorsk in DPR With HIMARS
Newsfeed
0
Access to the chat has been blocked for violating the rules . You will be able to participate again through:∞. If you do not agree with the blocking, please use the feedback form
The discussion is closed. You can participate in the discussion within 24 hours after the publication of the article.
To participate in the discussion
log in or register
loader
Chats
Заголовок открываемого материала