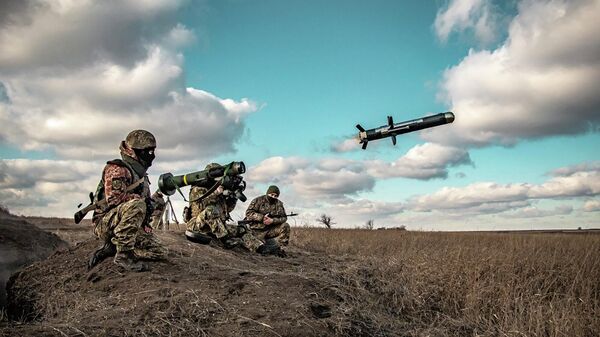 The deterioration comes amid tense relations between Russia and NATO, whose members have been claiming that Moscow is planning "an invasion" of Ukraine. Moscow has repeatedly denied the accusations, warning of the possibility of provocations by Kiev in a bid to resolve the conflict in Donbass by force.
The militia of the Lugansk People's Republic stated that the situation in the region has deteriorated significantly over the past day, as Kiev is trying to escalate the conflict. The republic urged international observers to record the attack and take measures to prevent aggression by Ukraine.
Earlier in the day, the Ukrainian military fired mortar shells and grenades at four localities in the self-proclaimed Lugansk People's Republic (at 2:30 a.m. GTM on Thursday), according to the Joint Centre for Control and Coordination.

"Ukraine's armed units grossly violated the ceasefire regime, using weapons that, in accordance with the Minsk agreements, should be withdrawn", an officer of the LPR mission to the JCCC noted.

LNR authorities stressed that by using heavy weaponry, Ukraine is also violating the ceasefire measures struck in 2020.
An LPR representative also told Sputnik that Kiev is demonstrating an intention to use "foreign military assistance" to resolve the Donbass conflict by force.
In the meantime, the People's Militia of the self-proclaimed Donetsk People's Republic (DPR) said its troops returned fire at the points of the Ukrainian security forces.

"In order to protect the civilian population, our defenders were forced to return fire to suppress the enemy's firepower. Information on civilian casualties and damage to civilian infrastructure is being clarified," the militia's spokesman said. 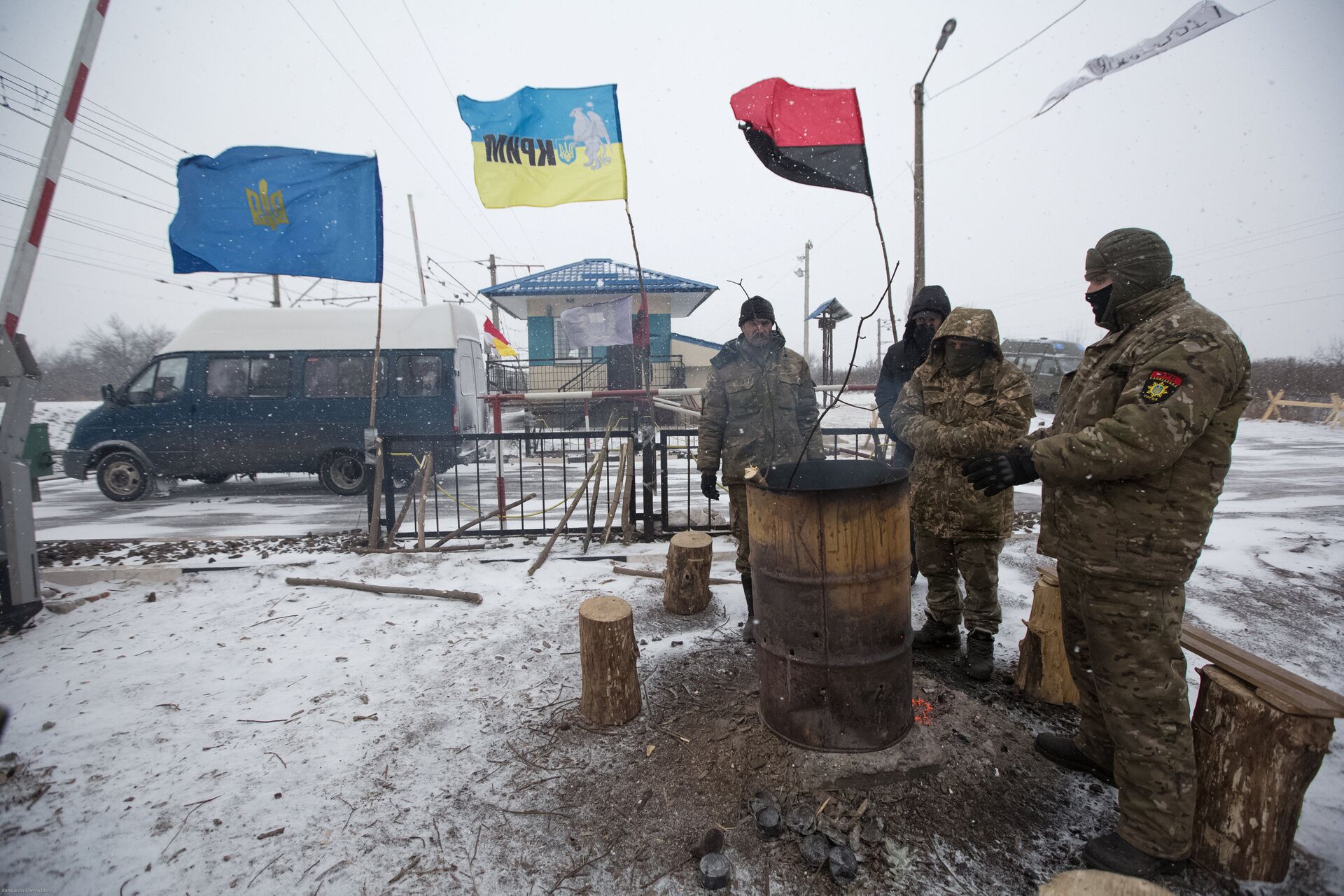 Activists warm themselves by a fire in a camp at Kryvyi Torets station as they take part in a rail blockade that has halted coal supplies in the village of Shcherbivka in the Donetsk Region, 14 February 2017.
© REUTERS / Konstantin Chernichkin
Russian President Vladimir Putin earlier stressed that the Minsk agreements, struck between Kiev and the self-proclaimed republics in 2015 to stop the bloodshed, represent the only possible solution to the conflict, but Kiev does not want to fulfill them. According to Putin, Ukraine has been dragging out negotiations to resolve the conflict, and against this backdrop, NATO has been deploying military equipment closer to the border with Russia.
The conflict in eastern Ukraine began in 2014, after a coup d'etat in Kiev. Donetsk and Lugansk refused to recognise the new government and proclaimed their independence from Ukraine. In response, Kiev launched a military operation.
The war claimed at least 31,000 lives, while over 2.5 million civilians were either internally or externally displaced, hundreds of thousands of them taking refuge and being granted Russian citizenship. Last month, Moscow warned that it would not tolerate any provocations by Kiev in Donbass, or any attacks against Russian citizens living there.
New firstOld first
02:41 GMT 18.02.2022
Ukrainian Army Shelled Self-Proclaimed LPR 29 Times Within Past 24 Hours - Official
LUHANSK, Ukraine (Sputnik) - The Ukrainian Armed Forces have shelled the self-proclaimed Luhansk People's Republic (LPR) 29 times within the past 24 hours, including with the use of heavy weapons, a spokesperson for the LPR mission to the Joint Center for Control and Coordination (JCCC) of the ceasefire regime in Donbas told reporters on Friday.

"Within the past 24 hours, the Ukrainian Armed Forces have violated the ceasefire regime 29 times," the spokesperson said.

"In order to cover the events in the Donbas in the right direction for the West, provide information support for the offensive operation and justify the intensification of Ukraine's military operations in the eyes of the global community, representatives of Western media, including US TV channels CNN, NBC, as well as the Romanian TV channel ANTENA TV arrived at the areas of the [Kiev-controlled] settlements of Stanytsia Luhanska, Shchastia and Krimske on February 17, accompanied by officers of the 74th Center for Information and Psychological Operations," Filiponenko said, commenting on the shelling of a kindergarten in the territory controlled by Kiev.

He clarified that for the same purpose, the arrival of TV crews from Albania, Belgium, Georgia, Latvia, Luxembourg and North Macedonia was planned for the beginning of next week.

"We believe that this farce was fabricated specifically for these representatives of the media," Filiponenko stressed.
19:11 GMT 17.02.2022
Donetsk Had to Respond to Fire by Kiev's Forces, Military Spokesman Says

"Today we were forced to respond to fire from the neighboring side and destroy these firing points. If they continue it further, accordingly, we will destroy. Then we'll see which of us was right — the one who defends his land or the one who wants to occupy it," DPR military spokesman Eduard Basurin said on the air of the Rossiya 24 broadcaster.

"We have already prepared a full package of sanctions (...) We have a very tough package prepared and I am ready to present this package as soon as needed," Borrell told

"President Zelenskyy in our conversation asked for the opportunity to talk with Putin and that Italy could help in this. The participants in today's meeting made the same request. It will not be easy, but the goal is for the presidents of Russia and Ukraine to sit at the same table," Draghi told reporters.

13:17 GMT 17.02.2022
US Secretary of State Blinken to Give Speech During UNSC Meeting on Minsk Agreements