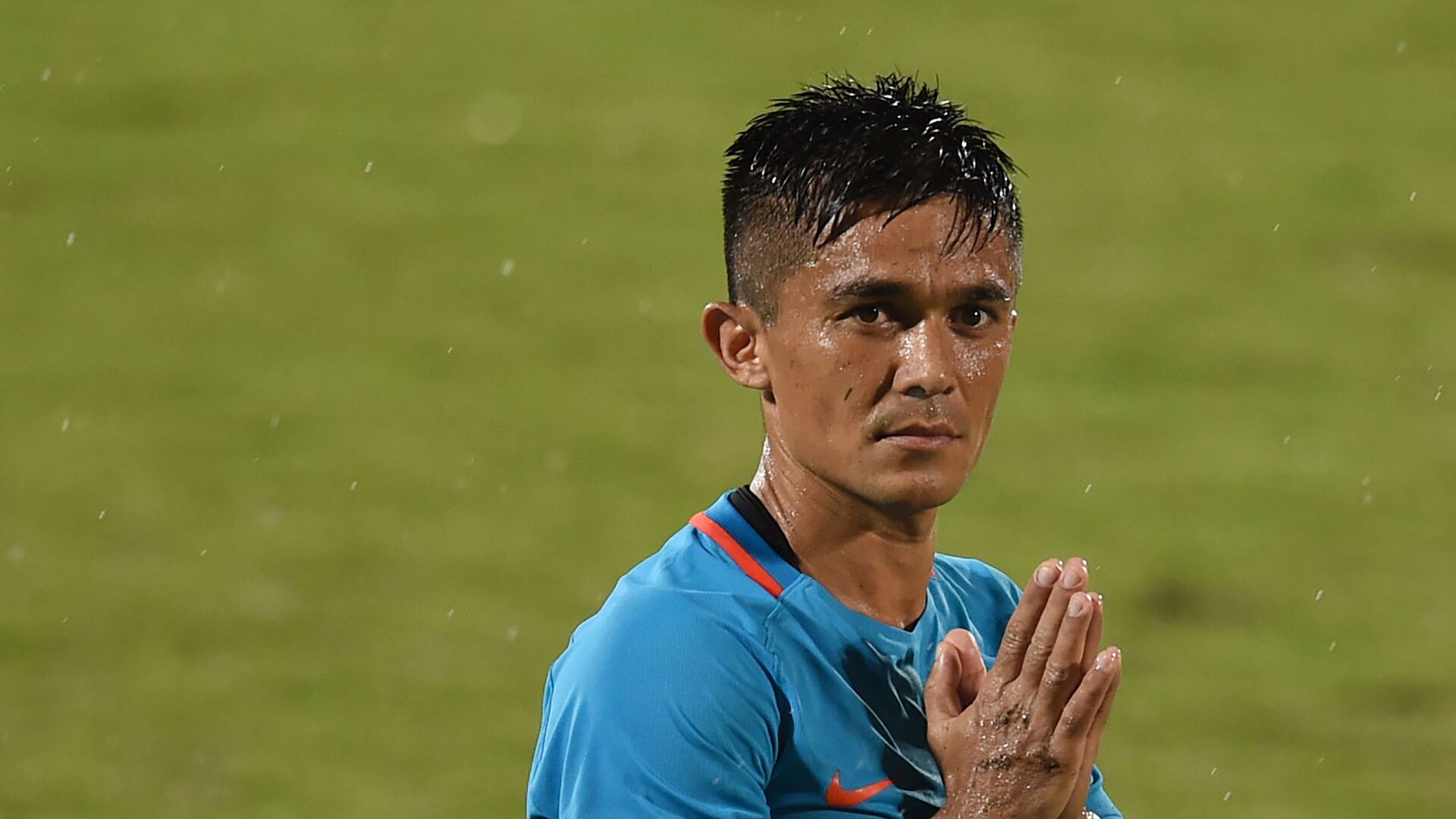 Pawan Atri
All materials
Widely regarded as India's best centre-forward, former captain Bhaichung Bhutia represented the country for 16 years before retiring from international football in 2011. He is now a football presenter known for his work on the Sony Pictures Sports Network (SPSN).

Former Indian captain Bhaichung Bhutia, who was the first footballer of the country to play 100 international matches, believes India has found its Cristiano Ronaldo in Sunil Chhetri.

Lauding the current Indian football team captain Chhetri for his professionalism, Bhaichung says Ronaldo and Chhetri's work ethic and their hunger to do well at the sport's grandest stage is simply incomparable.

In 2005, when Chhetri made his national team debut, Bhaichung was the team's captain. Hence, he had an opportunity to observe Chhetri from close quarters.

Bhaichung, who would be doing commentary on the upcoming Euro 2020, spoke to Sputnik on Monday about Chhetri's qualities, Ronaldo's potential move back to Manchester United, the impact of ISL and much more.

Sputnik: You share a special bond with Sunil Chhetri. What makes him so special as a player in the team?

Bhaichung Bhutia: I have seen Sunil as a young boy and now as an experienced campaigner. He is like Cristiano Ronaldo, who is a workaholic, who's very professional and maintains his fitness levels very well.

He has been one of the greatest examples for Indian footballers to see that you can really achieve what you want to achieve through your dedication, determination and work ethics.

I would say, in terms of his footballing lifestyle, Sunil Chhetri is truly India's Cristiano Ronaldo. Obviously, Ronaldo is a great player, but both Sunil and Ronaldo have become great because they continuously work hard and strive for excellence.

Sputnik: Do you think Indian Super League (ISL) has made a positive impact on Indian football?

Bhaichung Bhutia: ISL definitely has had a very positive impact on Indian football because ISL has brought a lot of corporates into the sport. The fans are now seeing global stars performing in the country, which they would never get to see in the I-League.

‘Reads Like a Goodbye’: Fans Speculate as Cristiano Ronaldo Posts Cryptic Instagram Message
Even the salaries and contracts of the players have also seen a decent hike. It gives players hope, it gives parents hope that they can get to see their children play ISL and they can have a good livelihood.

At the same time it showcases Indian football to every citizen in India and that is very, very important because when football is being seen, that's how I think a lot of youngsters get motivated to play for the clubs of their own city. ISL is certainly a good thing that has happened to Indian football.

Sputnik: How do we make football a more household game in India as it is in Western countries?

Bhaichung Bhutia: It is extremely challenging to popularize football because India is a cricket-loving nation. It is important that the Indian national team does well internationally, and that's how people connect because you need teams to win and perform.

It is a big challenge because football is the only sport which is played by every country around the world and the kind of interest and investments people have in football in these countries is quite massive.

That's why it becomes very, very difficult to compete and win in Asia to qualify for the FIFA World Cup.

Sadly, India isn't a sporting nation as such. We need to create that sporting culture to become a footballing giant.

Sputnik: Cristiano Ronaldo may return to Manchester United this season. Do you think he can bring the club's glory days back?

Bhaichung Bhutia: I am not sure if Ronaldo's return to Old Trafford can help United win trophies. It will definitely create a lot of buzz and interest and the fans would really connect with him if he comes back to Old Trafford.

Can a Cristiano Ronaldo Return to Manchester United Help Them End Their Trophy Drought?
It is so because it's the club which made him one of the best players in the world. But I don't think Utd will succeed in winning trophies even after CR7's arrival.

Sputnik: Who do you think is the greatest footballer of all time?

Bhaichung Bhutia: For me, Maradona is the greatest player of all time because he single-handedly won the World Cup, something no player in the world has achieved.

I think Maradona that way definitely stands out. Even though Pele won three World Cups, he had a great team. Maradona, on the other hand, was utterly dominant during his prime and led Argentina to World Cup glory on his own.

Sputnik: Who according to you is the best forward in the world?

With the Euro 2020 And Copa America starting soon, we will soon get the answer to this question because whosoever does well in these tournaments would surely end this debate.