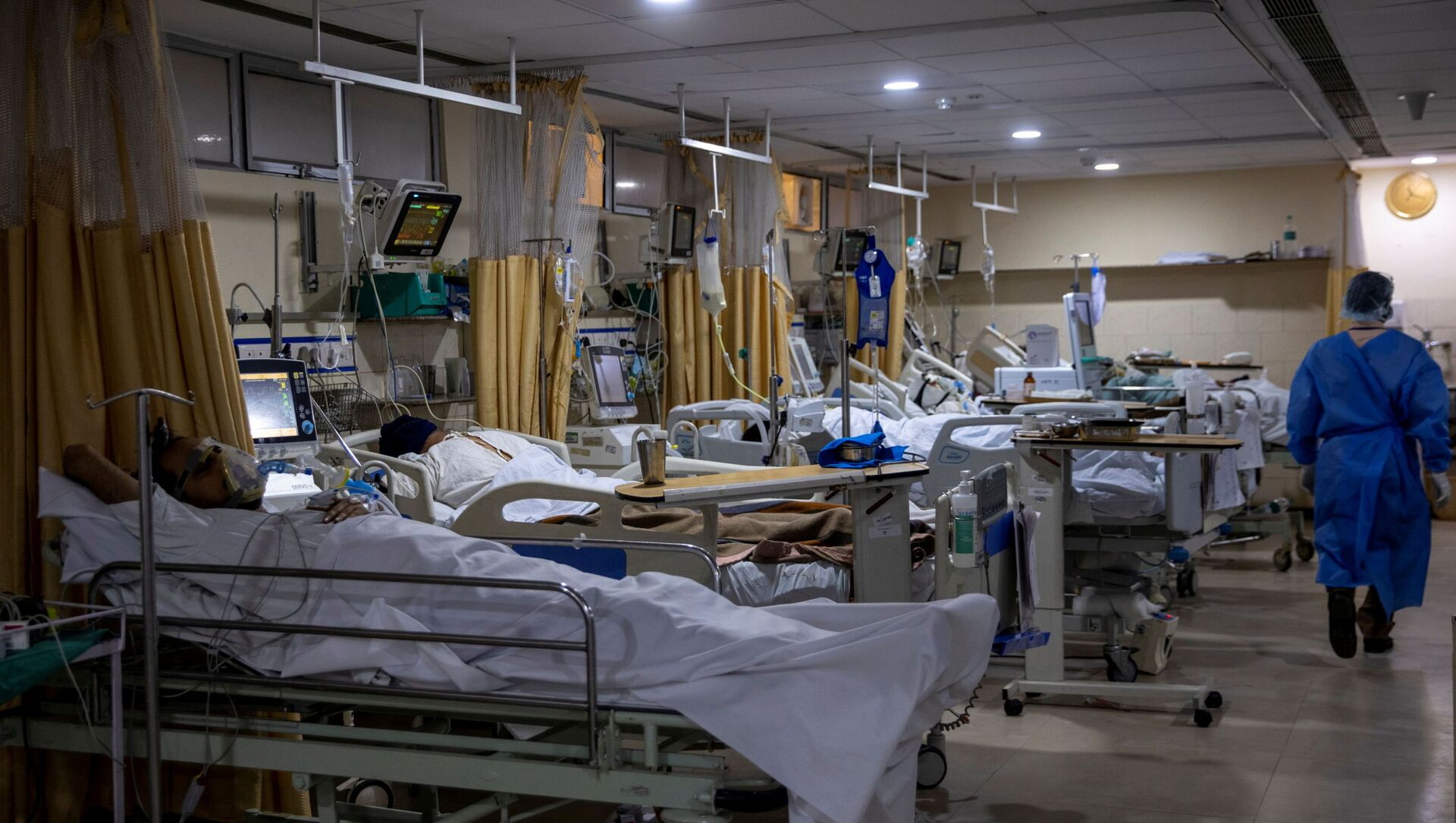 Ekaterina Blinova
All materialsWrite to the author
Following a second wave of the coronavirus pandemic, the government of Narendra Modi has come under criticism from domestic and international press for mishandling the crisis. Does the government deserve the backlash and how could this affect Modi and Bharatiya Janata Party's (BJP) future?

The press recalls that just a few months ago Modi told the World Economic Forum (WEF) that India had managed to get the pandemic under control. Some media outlets are pointing the finger at the PM for encouraging people to take part in the weeks-long Kumbh Mela, a major pilgrimage and Hindu festival, amid the coronavirus outbreak. To date, India has registered over 24 million infections and more than 266,000 COVID-related deaths, with daily fatalities reaching around 4,000.

While the Modi cabinet bears the responsibility for being caught off guard by the second wave, state governments are equally to blame, says Suvam Pal, a Beijing-based Indian media professional and author.

"Complacency, incompetency, carelessness, callousness, and chaos are the five apt words that sum up the reasons behind the catastrophic second wave in India," Pal argues.

The journalist suggests that the federal government underestimated the potential threat of the second wave: "After creditably containing the first wave and kickstarting its ambitious and much-publicised inoculation drive plus vaccine diplomacy, the Modi-led government was resting on those laurels and was caught completely off guard," he says.

According to Pal, India's Health Minister Harsh Vardhan, a qualified physician, who was elected to the office of Chairperson of Executive Board of the World Health Organisation (WHO) only last year, similarly failed to follow WHO-recommended protocols, policies, and countermeasures against the second wave. 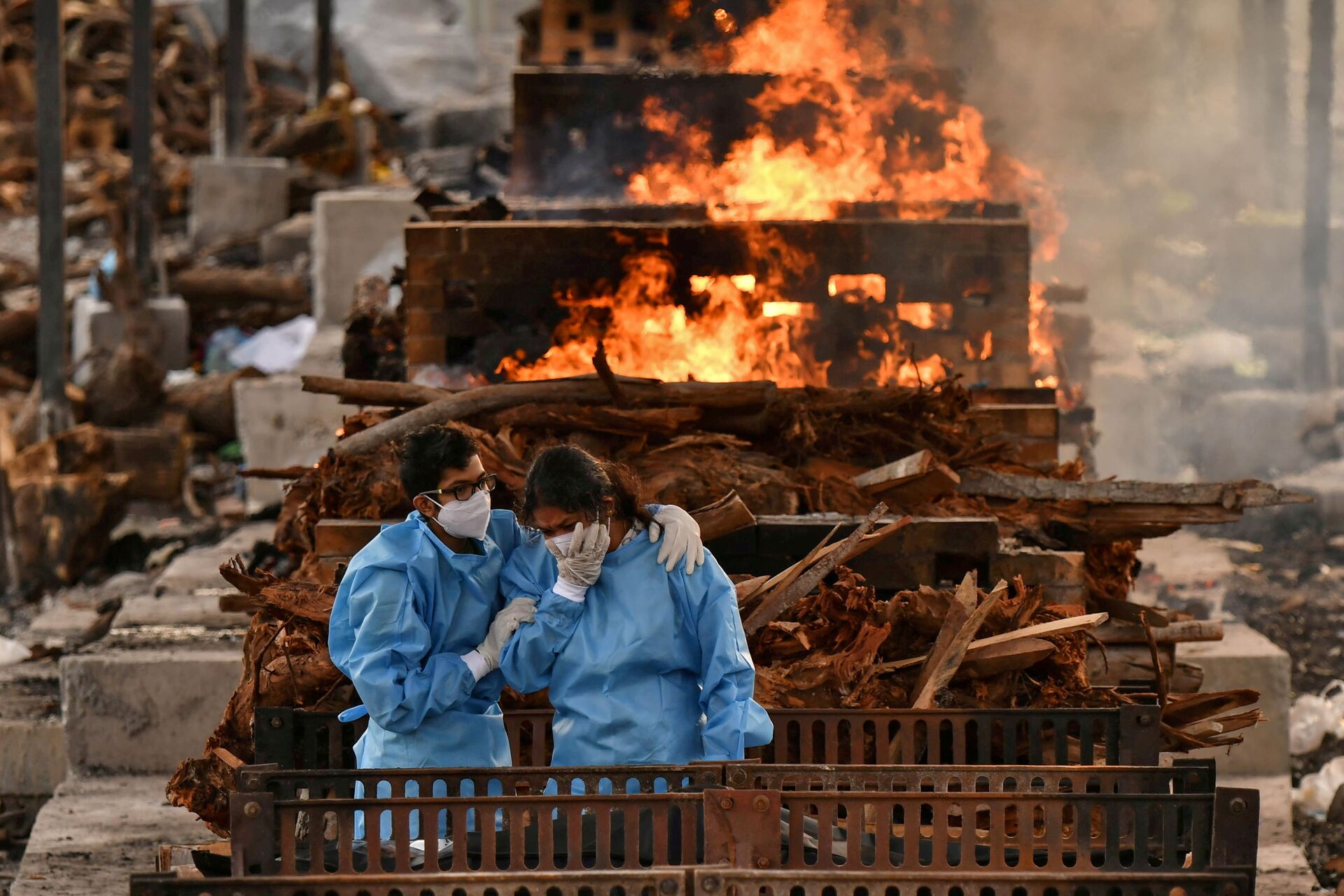 FILE PHOTO: Family members of Vijay Raju, who died due to the coronavirus disease (COVID-19), mourn before his cremation at a crematorium ground in Giddenahalli village on the outskirts of Bengaluru, India, May 13, 2021.
© REUTERS / SAMUEL RAJKUMAR

To add to the confusion, Modi, Dr Harsha Vardhan, and local BJP officials "failed to silent or reign in their own party leaders or associates, who have been relentlessly propagating unscientific theories and stupid remedies like cow dung bath and cow urine drinking treatment to prevent COVID-19," the author underscores.

"India’s quasi-federal governance structure empowers public health to be a state subject even though the central government plays a pivotal role in designing health policies and programmes," he explains. "Right from public health and safety awareness to vaccine drive, the state or the provincial governments are responsible for implementing various central government programmes, apart from designing their own policies to ramp up the health facilities and infrastructure in the respective states."

While the BJP-ruled states were waiting for their central ministers orders, "most of the opposition parties-ruled states were engaged in blame games and without showing any intent to be on the same page with the central government in a collective fight against the virus," argues Pal.

According to him, "none of the states has played any proactive role to contain the second wave and we can see the result." 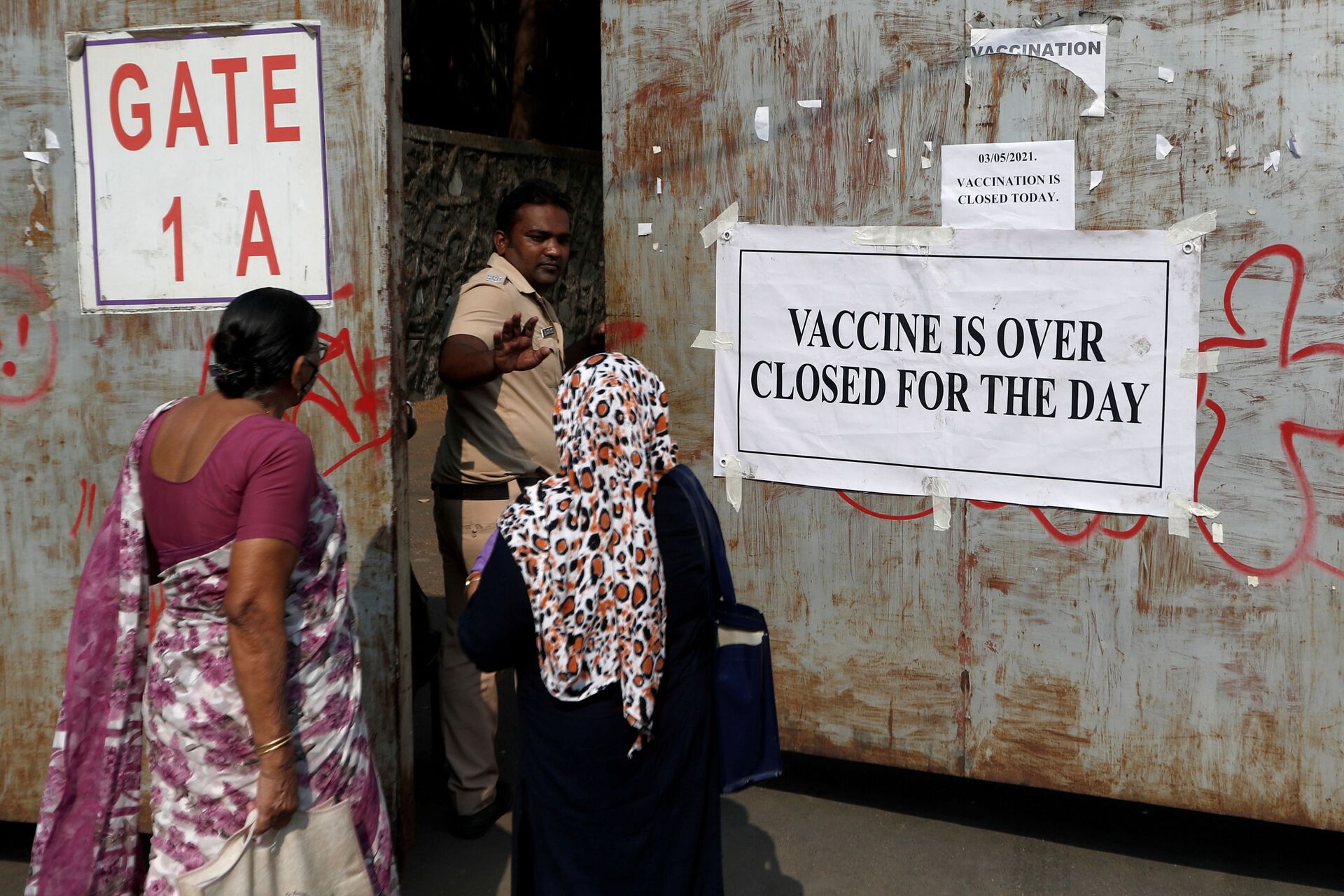 A policeman asks people who came to receive a dose of a coronavirus disease (COVID-19) vaccine to leave as they stand outside the gate of a vaccination centre which was closed due to unavailability of the supply of COVID-19 vaccine, in Mumbai, India, May 3, 2021.
© REUTERS / FRANCIS MASCARENHAS

The letter reads: "Images of bodies burning in cremation grounds, relatives of deceased wailing inconsolably, emotional outbursts and hysterical reporters and cameramen swarming over the bereaved – who are going through deeply emotional moments – this may help garner eyeballs. But there is a steep price to be paid for the coverage."

Admitting that some coverage seemed clearly unbalanced, Pal notes that these reports have helped people understand "the gravity of the situation."

However, at the same time, the India media divided into pro-Modi and anti-Modi groups, and sometimes "indulge in cherry-picking," according to the author.

"The pro-Modi media has been enthusiastically blaming the Tablighi Jamaat congregation for the first wave and the farmers’ rallies and protests as super-spreaders during the second wave while the anti-Modi media has been vociferously slamming the horrendous Kumbh Mela gathering or election rallies," Pal points out.

Actually, all the aforementioned factors, including other Hindu, Muslim, Sikh, and Christian mass-gatherings, apparently contributed to the steep rise in COVID infections and deaths, he continues. However, many media organisations are involved in blame-shifting instead of "calling out each of those super spreading events and giving a comprehensive and multidimensional picture." 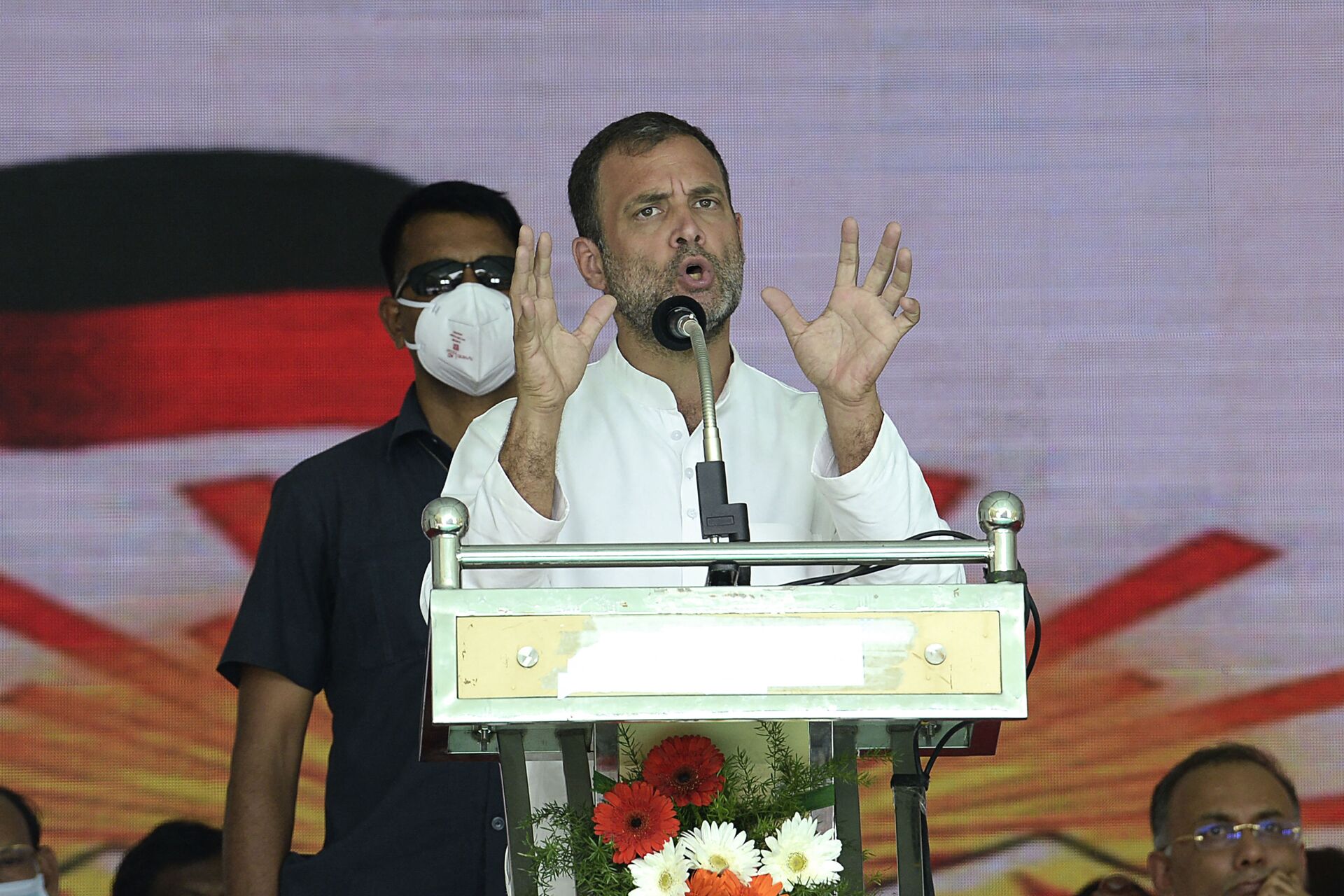 Still, according to Pal, the BJP hardly lost in the latest polls; except for West Bengal, the party won more seats than previous elections in a number of states.

"The COVID crisis may not have affected the outcome of the Indian assembly elections except the final phases of the polls in the state of West Bengal," he believes. "However, the second wave and the government’s failure to contain it are bound to have a substantial impact on Modi and his party BJP’s prospects in the upcoming state elections, which include Uttar Pradesh and Punjab." 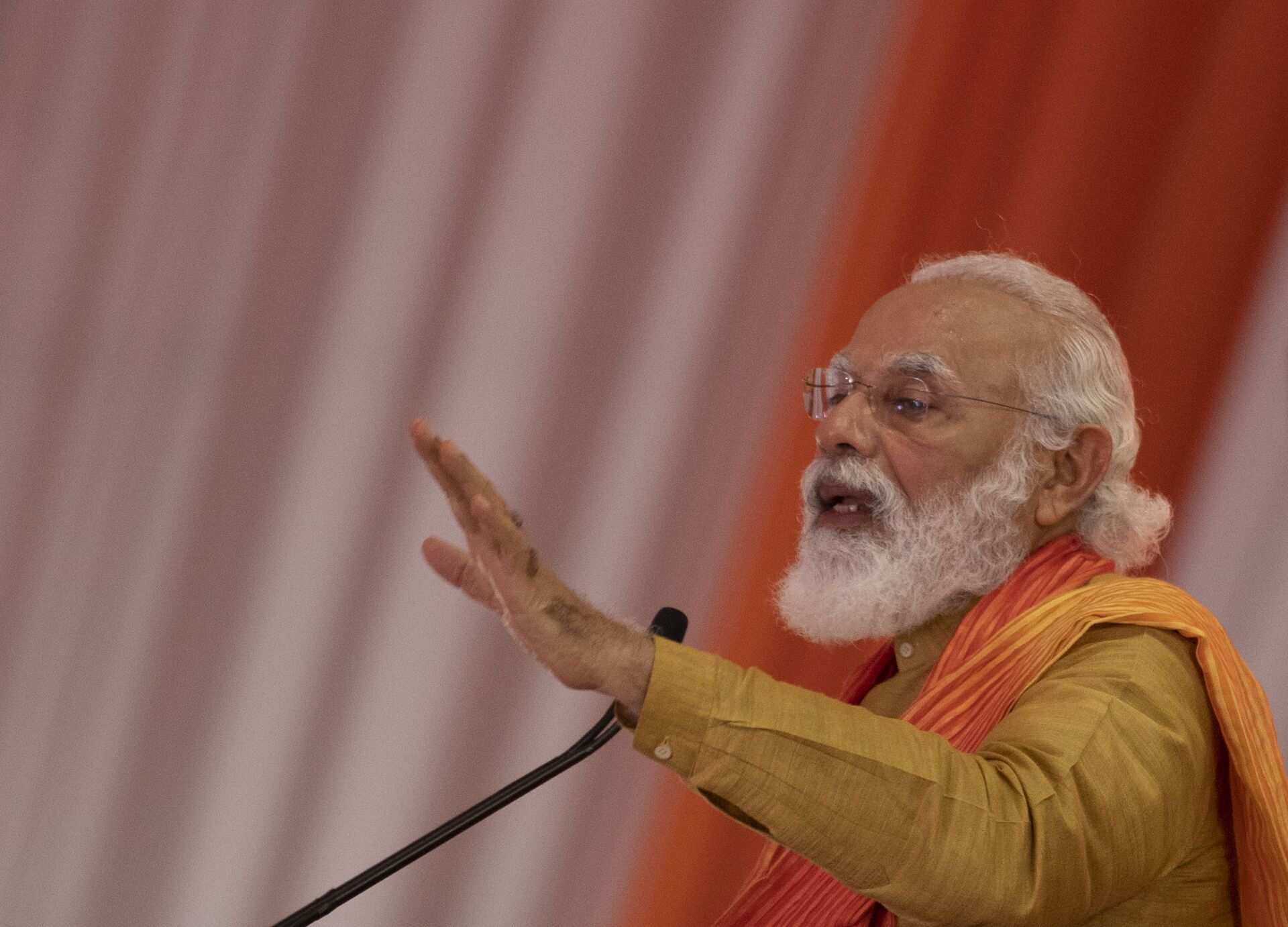 The author admits that Modi’s skyrocketing popularity over the past seven years has taken a plunge amid the second wave of coronavirus. According to Morning Consult, the prime minister's approval rating fell to 63 percent as of 11 May, down from 74 percent at the end of March.

"If Modi continues to ignore or overlook real science and allow the unscientific activities by his government like creating Rashtriya Kamdhenu Aayog, which once publicly propagated the pseudoscientific experiment of covering mobile handsets with cow dung, I am sure the urban and educated voters will desert him for promoting stupidity at the expense of his remarkable grassroots development works," Pal suggests. 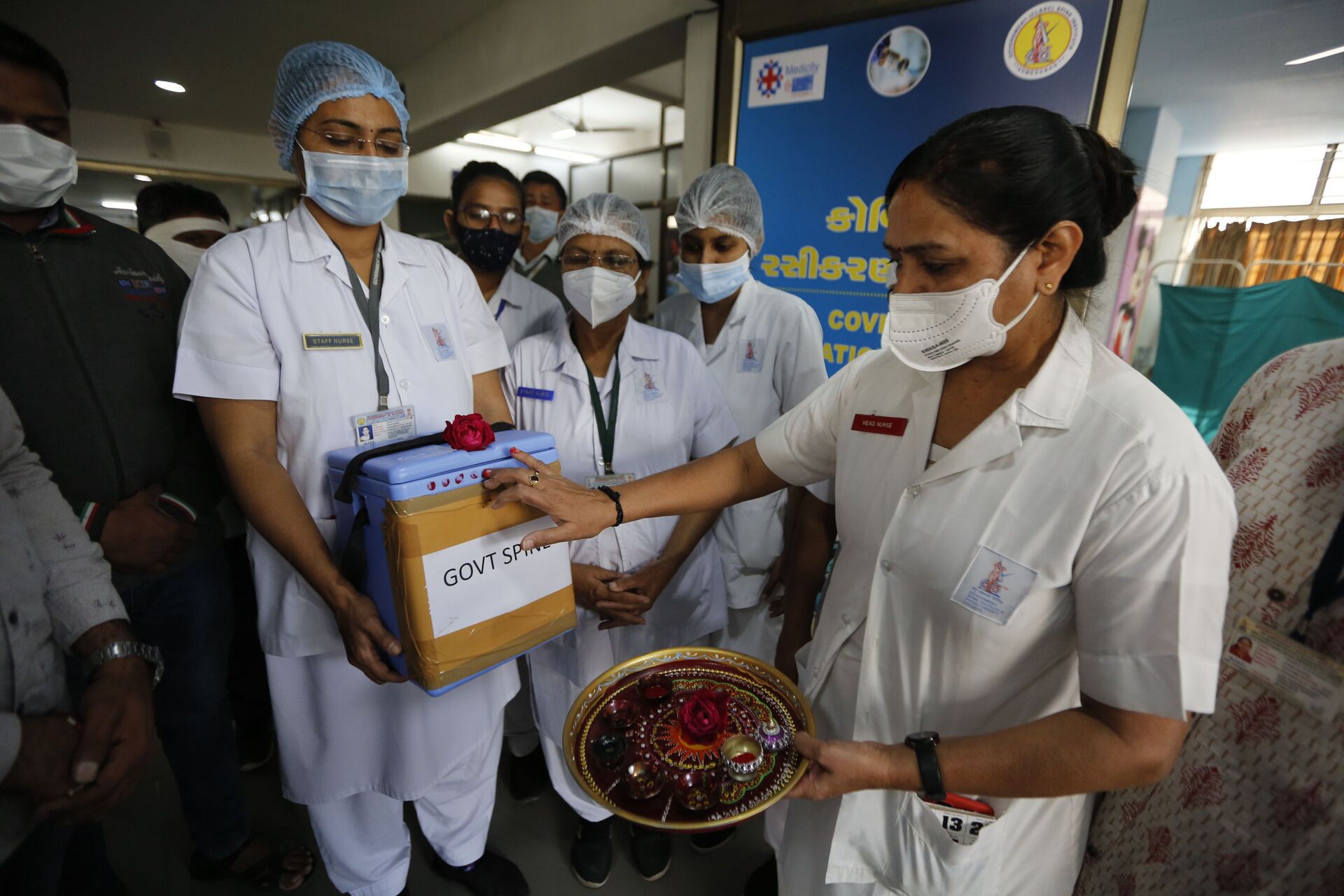 Meanwhile, the Modi government is racing against the clock to curb the outbreak. According to News18, an Indian English-language news television channel, New Delhi is planning to make available more than 2.5 billion vaccine doses to inoculate the entire adult population. The government is planning to produce them over the next seven months.

The broadcaster notes that although the government kicked off its inoculation programme in January 2021, many in India have doubts regarding the efficacy of the jabs. However, following the disastrous spike in coronavirus cases, many have rushed to get inoculated.

"Now the vaccine centres are crowded, especially after vaccination for people in the 18-44 age group started from May 1," News18 reports.