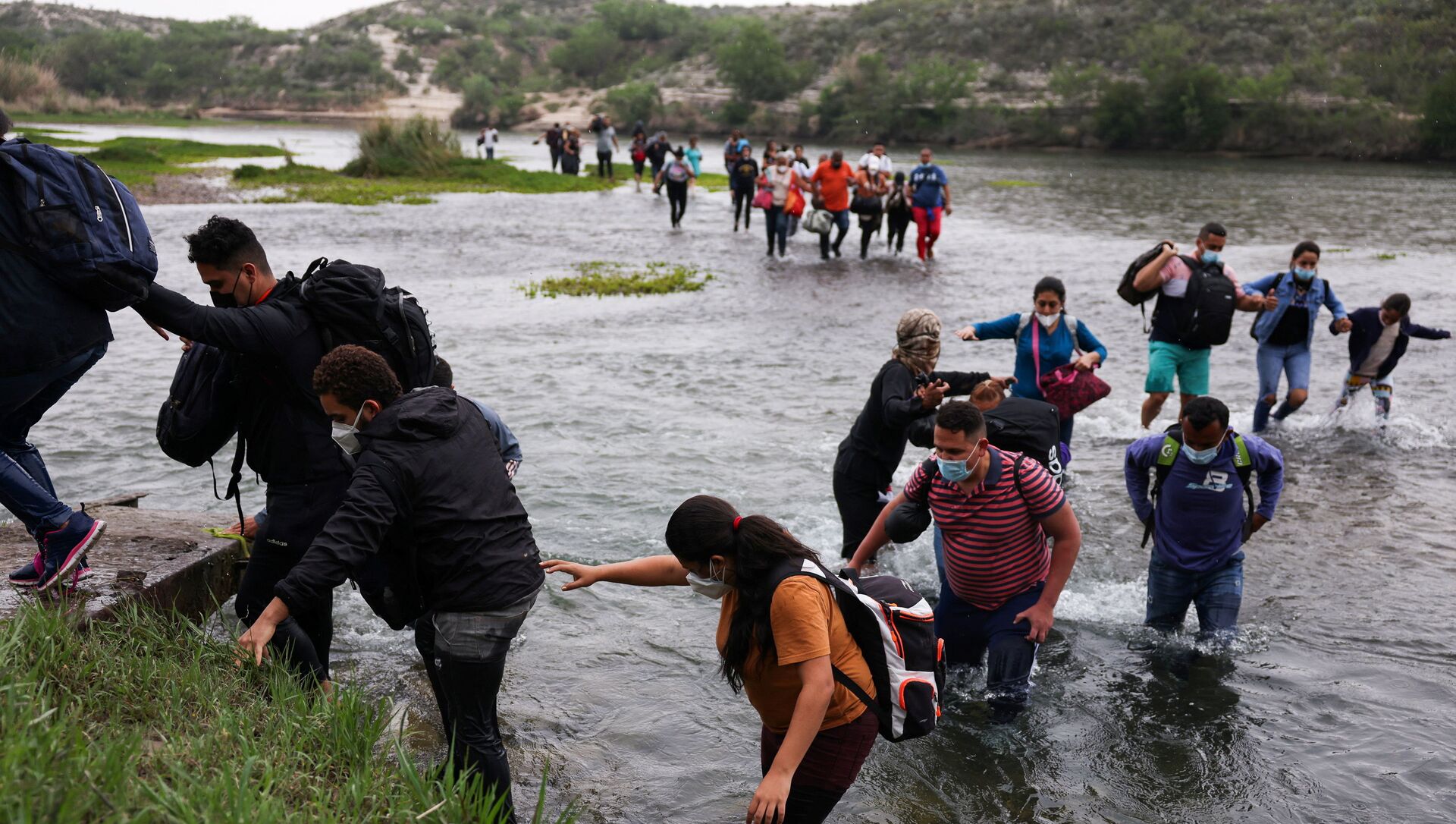 Joe Biden decreed that work on the Congress-funded wall should cease as part of his flurry of executive after taking office on 20 January, including ending Trump's agreement with Mexico to accommodate asylum-seekers south of the border until their hearings were scheduled.

Fox News reported on Thursday that the US Army Corps of Engineers (USACE) would resume building a 13.4-mile stretch of levee in the Rio Grande Valley in Hidalgo County, Texas. This followed pressure from residents and politicians to stem the flood of illegal immigrants crossing the border.

​The USACE stressed that the construction was on the river levee, not the wall itself — but conceded the work was being done to "support" the Customs and Border Protection (CBP) agency's infrastructure programme.

The Department of Homeland Security said the work was intended to "protect border communities from physical dangers resulting from the previous administration’s approach to border wall construction", which it said threatened the area with "catastrophic flooding".

GOP Representative Accuses Facebook of Promoting Human Smuggling Amid Border Crisis
But just a month earlier, investigative journalists with Project Veritas exposed how dozens of illegal immigrants, including many children, were being kept in open-air, dirt-floored pens under a road bridge outside McAllen, Hidalgo County's largest city.

"Biden's U-turn in rhetoric and actions can only be explained by one thing: There is a real problem.  No amount of posturing and obfuscating can solve it. The border as it stands today is a humanitarian disaster and anyone who claims to support immigrants should be ashamed of the lack of solutions proposed by our leadership. Before Trump, border security, ...yes, including a wall, was a bipartisan issue supported by many on both sides. Maybe now that we're in a post-Trump era, the President can be a little more pragmatic. It's amusing that securing our borders is somehow seen as anti-Hispanic, or even xenophobic, when the number one human rights crisis in the world is happening right now on our own soil to the very people President Biden and Vice President Harris claimed to care about", says GOP political consultant Anthony Angelini.

Angelini believes no serious discussion about immigration can occur without mentioning the cartels:

"They are the single biggest threat to our border safety and the single biggest humanitarian issue facing Central America. There will be no solution on the southern border until the cartels are dealt with. And that doesn't happen when you openly alienate foreign leaders, especially the President of Mexico. As for Biden's image with Democrat voters, that has never been an issue for him. He has the establishment media to cover for his every move -- or lack thereof. The Vice President has more to worry about as the Presidentially-endorsed Immigration Czar. Trademark Pending. But even the VP has the media to give her credit for every success and no blame for any failures".

Biden decreed that work on the Congress-funded wall should cease as part of his flurry of executive orders after taking office on 20 January, including ending Trump's agreement with Mexico to accommodate asylum-seekers south of the border until their scheduled hearings came up.

Mexican troops were seen on the south bank of the Rio Grande near Del Rio, Texas, upstream from Hidalgo on Wednesday, detaining those trying to cross illegally. Del Rio Mayor Bruno Lozano — a Democrat — told Fox and Friends the same day that he was exasperated by his party's downplaying of the crisis, which has seen a near five-fold increase in undocumented arrivals.

20 Republican state governors, including Texas' Greg Abbott, signed a letter to Biden on Tuesday urging him to act on the migrant crisis.

"Contrary to statements from your Administration, the border is neither closed nor secure", they wrote. "The crisis is too big to ignore and is now spilling over the border states into all of our states".