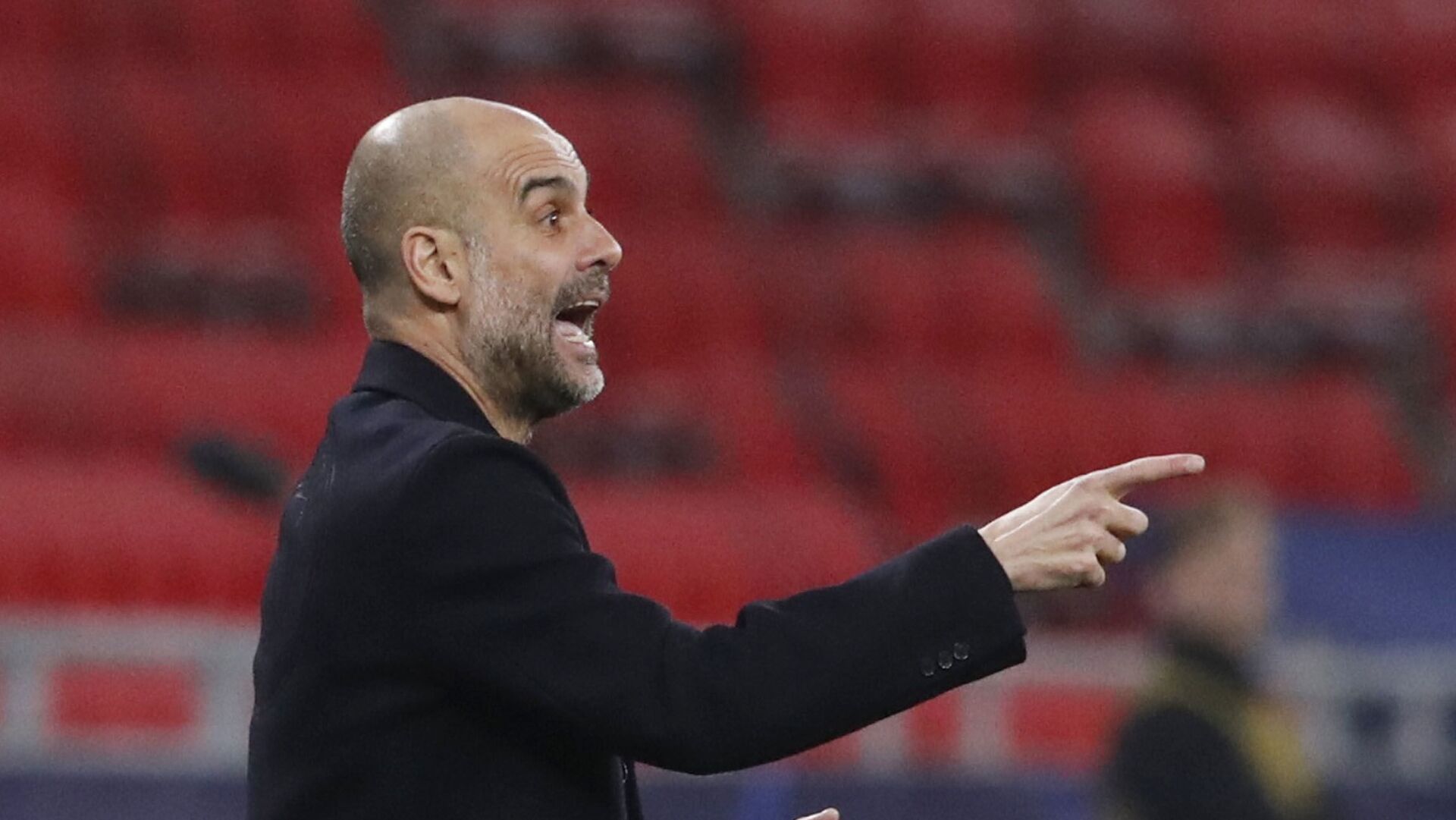 © REUTERS / BERNADETT SZABO
Subscribe
International
India
Africa
Manchester City manager Pep Guardiola has called the team's third Premier League title under his tutelage "the hardest one" after his side was crowned EPL champions for 2020-21 on Tuesday. City's third Premier League title in four years came after Manchester United suffered a 2-1 defeat against Leicester at home.

Manchester United's loss at Old Trafford has left Pep Guardiola's side with an unbeatable 10-point lead with three games to play, allowing them to snatch the title back from Liverpool, which they had surrendered to the Reds last season.

Guardiola, who also inspired City to win the Carabao Cup this season, dedicated the Premier League trophy to Colin Bell, the club's finest player, and the fans, who were unable to watch their favourite team in action at the stadium due to the coronavirus-induced lockdown enforced by the British government.

Speaking about the magnitude of Manchester City's Premier League title triumph, Guardiola said: "This has been a season and a Premier League title like no other. This was the hardest one. We will always remember this season for the way that we won. I am so proud to be the manager here and of this group of players. They are so special. To come through this season – with all the restrictions and difficulties we've faced – and show the consistency we have is remarkable. It is relentless. Every single day, they are there, fighting for success, trying always to be better. They have been so, so resilient".

Guardiola, who will have the chance to claim a historic treble on 29 May, when City competes against Chelsea in the Champions League final, led his side to an incredible 15 consecutive wins in the Premier League this season. In fact, a record 21 wins in a row across all competitions, propelled Guardiola's side to their latest Premier League title in 2020-21.

Manchester City Crowned Premier League Winners After Man Utd Lose to Leicester
Pep added: "At the start of every season, the Premier League is the most important title for us. This is the one where you have to be there every three days, playing all your rivals home and away. Only by being the very best, week in week out, can you win this competition. It is a huge success".

"It is so important to say a huge thank you to all our fans. In our toughest moments, we couldn't hear the crowd get behind us as usual, but we know they are with us everywhere we go and that has lifted us. I promise them we sense their love, we appreciate it and we could not have done what we have done without it. I hope we can all celebrate together one day not too far away. It has been such a hard year for so many people. This one is really for our fans and for Colin Bell and all his family".

Once Guardiola dedicated the club's title to the legendary Colin Bell, who died in January, City unveiled a huge banner that had "Champions" written on it around the Colin Bell Stand at the Etihad Stadium. Shortly after City's Premier League victory was confirmed, United's manager, Ole Gunnar Solskjær, praised Guardiola and his men and said that City have raised the bar high for their opponents to match next season.

"Congratulations to Manchester City, they are worthy champions", said Solskjær. "It is not a position we want to be in [losing at Old Trafford to confirm City's title] but the reality is we pushed them until the last 10 or 12 days of the season. They have been lauded and rightly so as one of the best teams there has been in the Premier League. They have put the bar very high. We have got to be big enough to hold our hands up and congratulate Pep and his players. We want to get there and that is the next step we want to make".

This is City's fifth Premier League title overall and Guardiola, who is renowned for his ability to transform the fortunes of football clubs the world over, has certainly delivered the goods at Etihad Stadium. He has guided City to 10 trophies since he joined them as manager in 2016.