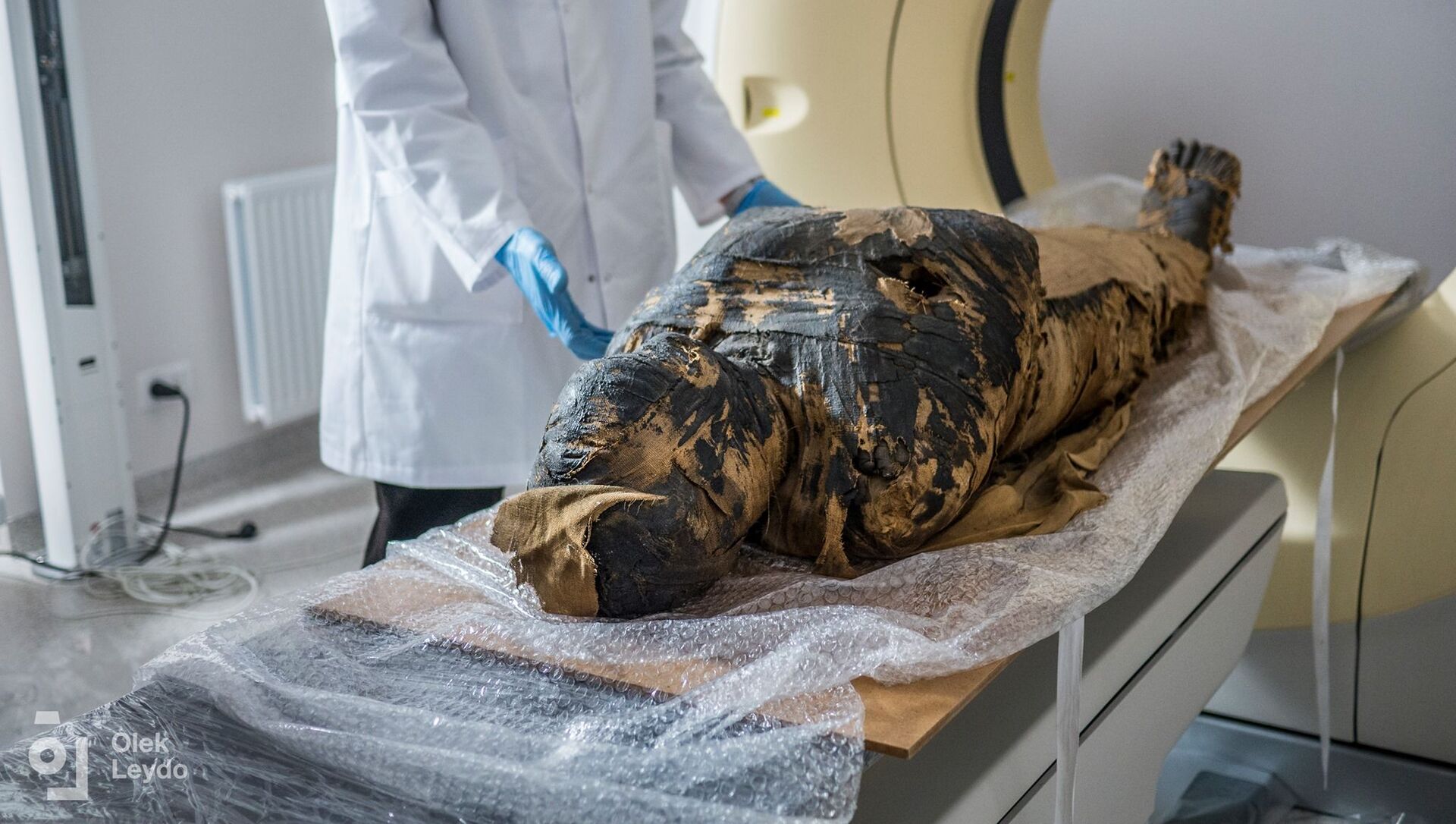 Aleksandra Serebriakova
Moscow-based Sputnik correspondent specializing in foreign affairs.
All materialsWrite to the author
In 1826, a mummy, believed to be discovered in the Valley of the Kings in Upper Egypt, was brought to Warsaw in a coffin initially made for a male priest, Hor-Djehuty, in the 1st century BCE. Only 190 years later, it was revealed that the mummified body actually belonged to a female.

Archaeologists from Warsaw University came across an unprecedented case of an “embalmed” pregnancy when discovering that a 2,000-year-old mummy that was on display at the National Museum in Warsaw was carrying a child when she died from some unspecified causes.

"We were about to conclude the project ... when my husband Stanislaw, an Egyptian archaeologist, looked at the x-ray images and saw in the deceased woman's womb ... a little foot," an anthropologist from Warsaw University, Marzena Ozarek-Szilke, told the Polish Press Agency.

The tomographic scanning, 3D visualisation and X-rays unveiled that the fetus in the woman’s body was between 26 and 30 weeks old, but its gender has not been discerned yet.

"For unknown reasons, the fetus was not removed from the abdomen of the deceased during mummification. That's why this mummy is really special,” said Wojciech Ejsmond, a researcher from the Institute of Mediterranean and Oriental Cultures at the Polish Academy of Sciences, who co-authored the paper with Marzena Ozarek-Szilke and other team members detailing the bombshell discovery.

Mummy 'Parade' in Cairo Stokes Fears of the Dreaded 'Curse of the Pharaohs,' Media Says
In the article published by the Journal of Archaeological Science, the researchers say that their discovery has marked “the first known case of a pregnant embalmed body”, bringing more light on aspects of how pregnancy was interpreted in the context of Egyptian religion and burial traditions.

But the story behind the mummy is shrouded in mystery. What is known so far is that the pregnant woman came from the elite in the city of Thebes and died in her twenties. She was “carefully mummified, wrapped in fabric, and quipped with a rich set of amulets”, the researchers unveil in a post for Warsaw Mummy Project group on Facebook, where they have shared images and scans of the diseased one.

Radiological examination of our mummy, has proved it is the body of a pregnant woman. She came from the elite of Theban community and was carefully mummified, wrapped in fabrics, and equipped with a rich set of amulets. #pregnantmummy pic.twitter.com/jfkLmxo8pi

​But there are a lot of gaps in this story. When the mummy first arrived to Warsaw in 1826, she was placed in a 1st century BCE coffin bearing the name of priest Hor-Djehuty, so no one had doubts that this was an embalmed male. It was only in 2016 when it was revealed that the body actually belonged to a woman. The tomographic images show that no mummified penis came with the body. According to the Egyptian tradition, this organ is usually “well preserved”, says Ozarek-Szilke.

What’s more, the woman’s wrapped body was said to have been discovered in royal tombs in Thebes in Upper Egypt in the early 1800s, but this cannot be proven with certainty. So the identity of the pregnant female, as well as why she was buried with a child despite her other organs being carefully removed, remains a secret to archaeologists. They have dubbed the mummy the Mysterious Lady of the National Museum in Warsaw.