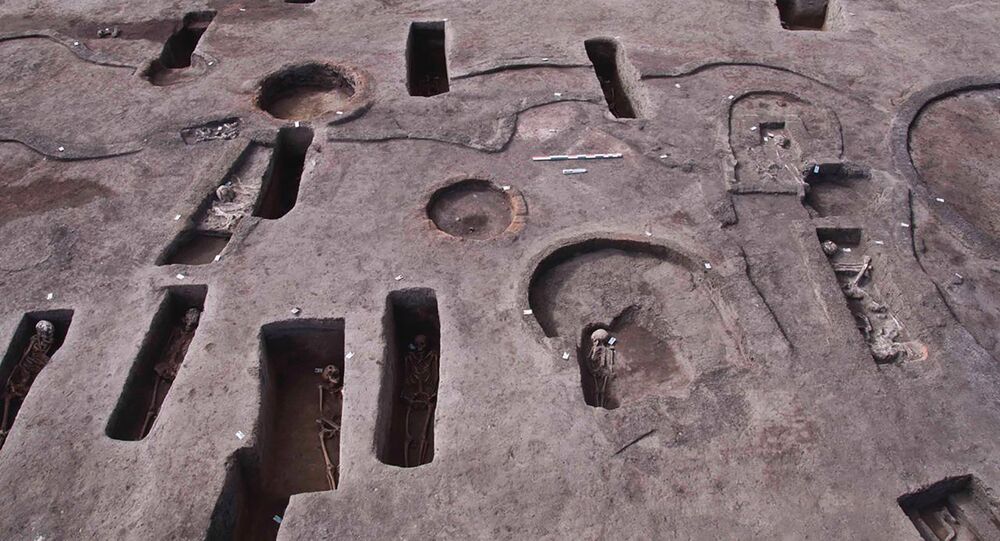 Egypt has been seeking publicity for its recent archaeological discoveries, ostensibly in the hopes of reviving flagging interest in its tourism sector, crippled by the coronavirus pandemic. Accordingly, on 3 April, an ostentatious parade was held to move 22 royal mummies to the newly-opened National Museum of Egyptian Civilisation in the capital.

Egyptian archeologists have made a remarkable discovery, unearthing 110 burial tombs in an ancient site in the Nile Delta, according to an announcement made on Tuesday by the Tourism and Antiquities Ministry.

The Koum el-Khulgan archaeological site in Dakahlia province, located around 150 kilometres (93 miles) northeast of Cairo, was found to contain different-shaped tombs concealing the remains of adults and children, funerary equipment and pottery objects.

Archaeologists unearthed 110 burial tombs in Egypt. Some of the graves date back to the Predynastic Period that spanned from 6000-3150 B.C. 📷 Egyptian Tourism and Antiquities Ministry pic.twitter.com/rq7VMTEDAR

68 oval-like tombs have been determined as dating back to the Predynastic Period, spanning from 6000-3150 BC with the raid of the First Dynasty of Pharaonic Egypt, according to the ministry.

An ancient era known as the Second Intermediate Period (1782-1570 BC), when the Semitic people of Hyksos ruled ancient Egypt, is reflected in 37 rectangular-like tombs.

The Naqada III period, dating from around 3200 BC to 3000 BC, is reflected in the remaining five oval-shaped tombs.

The discovery comes in the wake of a fascinating find in early April, touted as being the ‘second most important’ since Tutankhamun’s tomb.

A 3,000-year-old “lost city” was found to be shrouded by the sands of Luxor - the Nile Valley’s iconic Valley of the Kings. Known as the “The Rise of Aten”, the city dates to the reign of Amenhotep III, estimated at around 1,390 BC.

“Many foreign missions searched for this city and never found it."

“The discovery of this lost city is the second most important archaeological discovery since the tomb of Tutankhamun,” Betsy Bryan, professor of Egyptian art and archaeology at Johns Hopkins University in Baltimore, said in the statement.

The recent spate of finds hailing to the pharaonic era come as the country is struggling to boost its flagging tourism industry. The Covid-19 pandemic slashed tourism revenue to $801 million in the three months from last July, compared to $4.2 billion in the same quarter a year earlier, according to the central bank, as cited by Bloomberg.

Seen as feeding into these ambitious plans was the recent ostentatiously choreographed parade on 3 April to move mummies of 18 pharaohs and four other royals from the Egyptian Museum overlooking Tahrir Square to the newly opened National Museum of Egyptian Civilisation in the Fustat neighbourhood of Cairo.

© REUTERS / AMR ABDALLAH DALSH
The mummy of King Ramesses V is transported in a convoy from the Egyptian Museum in Tahrir to the National Museum of Egyptian Civilization in Fustat, in Cairo, Egypt April 3, 2021.

The procession of trucks adorned with designs to resemble ancient boats used to carry deceased pharaohs to their tombs, carried mummies in in climate-controlled cases.

Most of the mummies belong to the New Kingdom, which ruled Egypt between 1539 BC and 1075 BC, according to the Ministry of Antiquities.