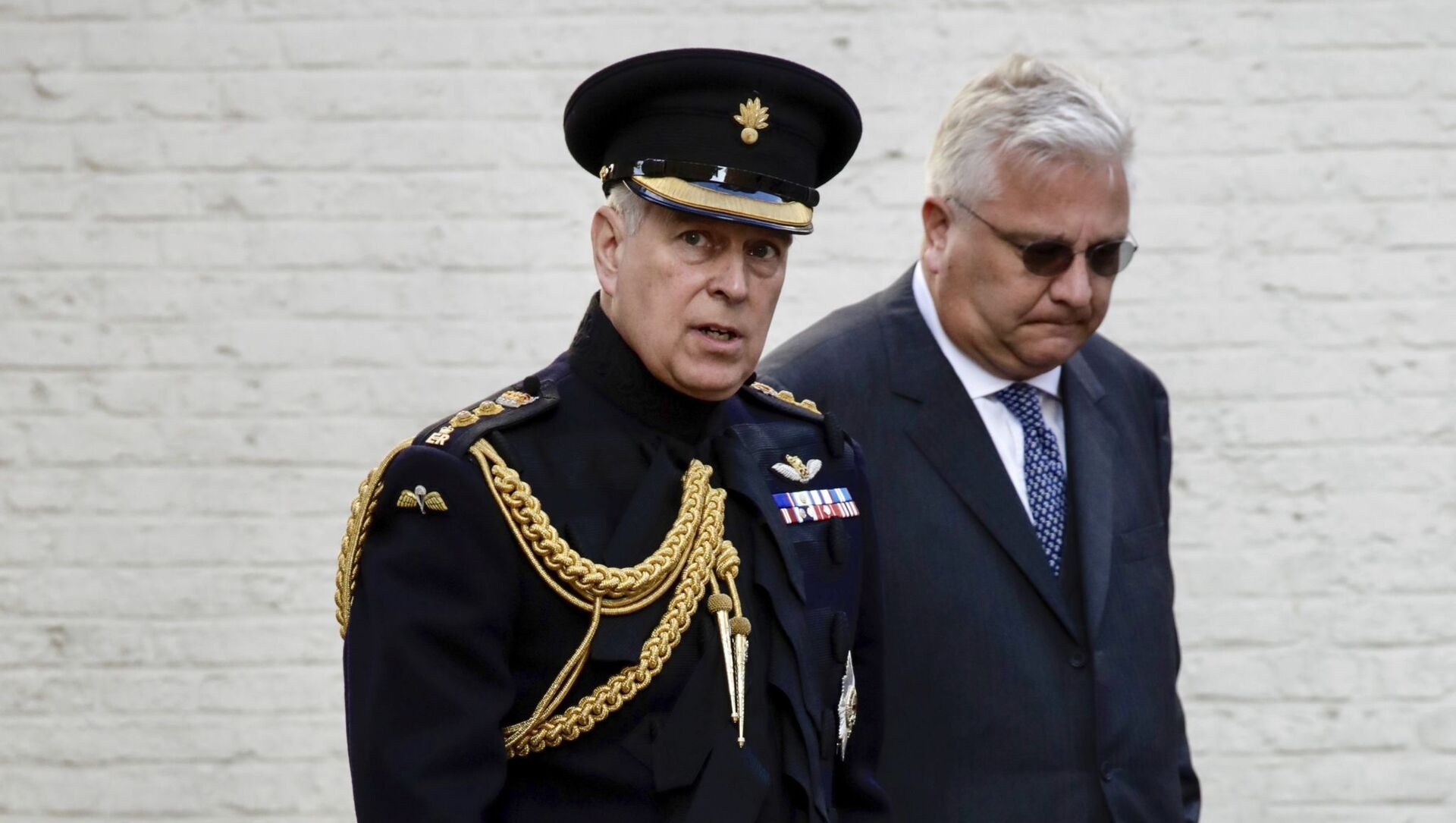 Aleksandra Serebriakova
Moscow-based Sputnik correspondent specializing in foreign affairs.
All materialsWrite to the author
Scandal-ridden Prince Andrew is preparing to attend his father’s funeral on Saturday alongside his royal relatives. The Duke of York, 61, stepped back from royal duties in November 2019 following a backlash over his controversial interview during which he failed to denounce his association with sex offender Jeffrey Epstein.

According to the Daily Mail, Prince Andrew has “demanded” to attend Prince Philip’s funeral wearing the uniform of an admiral despite only having the rank of honorary vice-admiral, which he received on his 55th birthday.

Andrew was set to be made admiral on his 60th birthday in 2020, as per royal tradition, but he apparently “offered to defer” the promotion until the clamour surrounding his association to Epstein subsides and he returns to royal duties.

The final decision will be up to the Queen, sources claim, but the report about the purported uniform request is already drawing ire among outspoken observers of the royal fam – particularly Piers Morgan.

Morgan, who recently quit his presenting job on Good Morning Britain after slamming Meghan Markle and her husband Prince Harry for their Oprah Winfrey tell-all interview, believes that until Prince Andrew tells the FBI “everything he knows” about Epstein, it's shameful for the royal to make requests to the Queen, especially in the wake of her losing her husband of 73 years.

“How dare he 'demand' anything given his refusal to be interviewed by the FBI about a very serious sex crime investigation?” Morgan raged in an op-ed for the Daily Mail.

The journalist also nailed Andrew for emerging “from hiding this week to speak to the media about the death of his father” in reference to the duke’s Sunday words with the press paying tribute to the late Prince Philip. 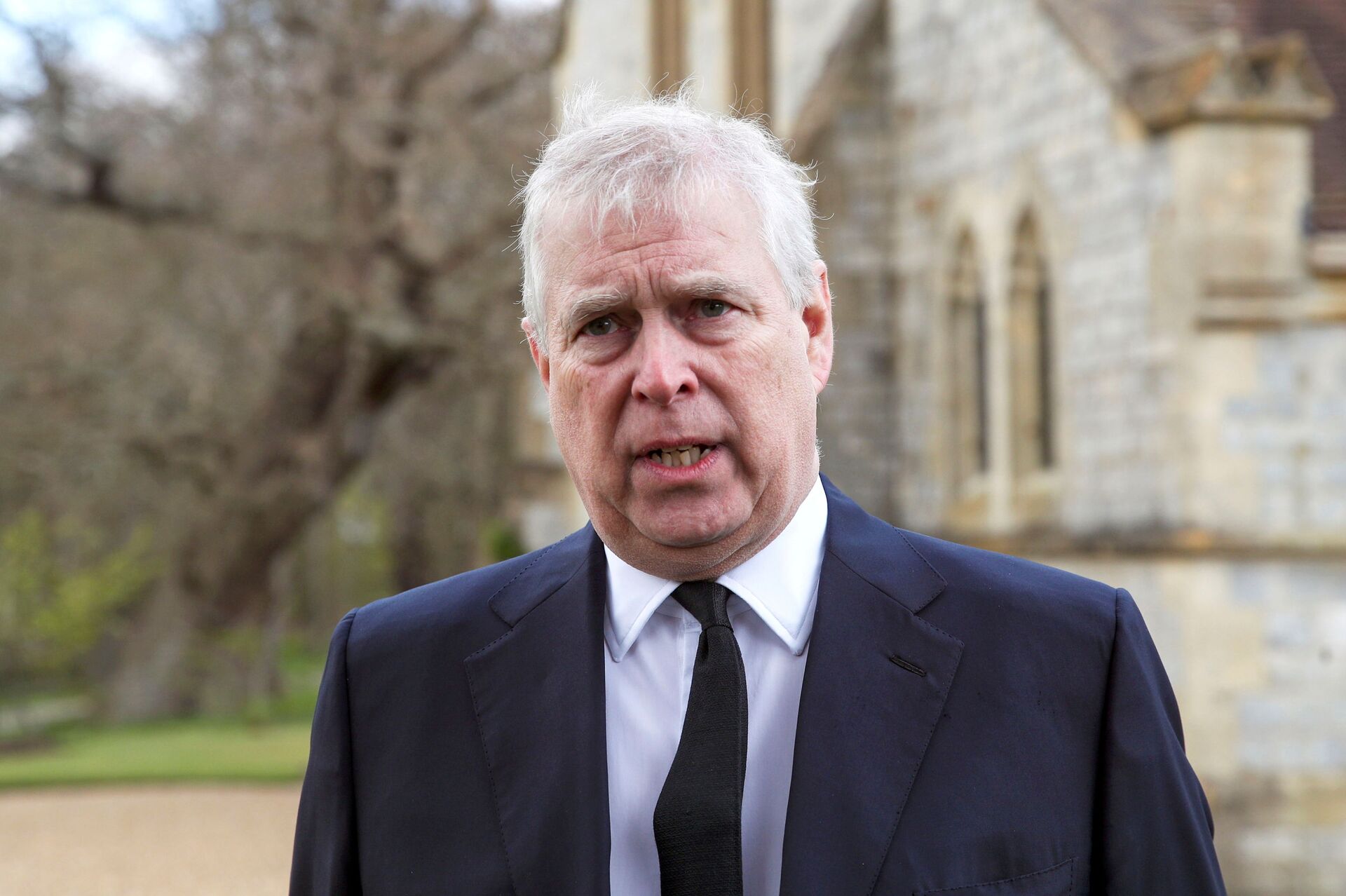 Britain's Prince Andrew speaks to the media during Sunday service at the Royal Chapel of All Saints at Windsor Great Park, Britain following Friday's death of his father Prince Philip at age 99, April 11, 2021
© REUTERS / POOL

According to the ex-GMB host, Andrew “remains a royal unfit for purpose” who is signalling attempts to “garner the nation's sympathy,” all while “trying to deflect public attention from his own shameful situation.”

Andrew stepped back from royal engagements in November 2019 after giving a disastrous interview to BBC’s Newsnight Emily Maitlis – during which he denied allegations that he had sex with one of Epstein’s alleged victims Virginia Roberts Giuffre while she was just 17.

During the interview, the Duke of York made some controversial claims while disputing Giuffre’s account about their alleged encounter. He was also accused of sounding unsympathetic towards Epstein’s victims while defending their unfortunate connection.

Prince Andrew then slipped into obscurity after stepping back from his royal duties, saying he continues to “unequivocally regret his ill-judged association with Jeffrey Epstein.”

But more questions have emerged since then, as former US Attorney for New York Geoffrey Berman maintained in January 2020 that Andrew had failed to respond to FBI’s multiple interview requests over an ongoing probe into Epstein’s crimes. The prince conveyed through palace aides that he was up for cooperating and had actually spoken to US authorities. However, Berman remains unconvinced.

So has Piers Morgan.

Prince Philip passed away on Friday at Windsor, shortly after returning from hospital where he spent almost a month while being treated for an infection and heart issues. His funeral on 17 April will be attended by a close group of relatives, including his grandson Prince Harry, who is flying in from LA.