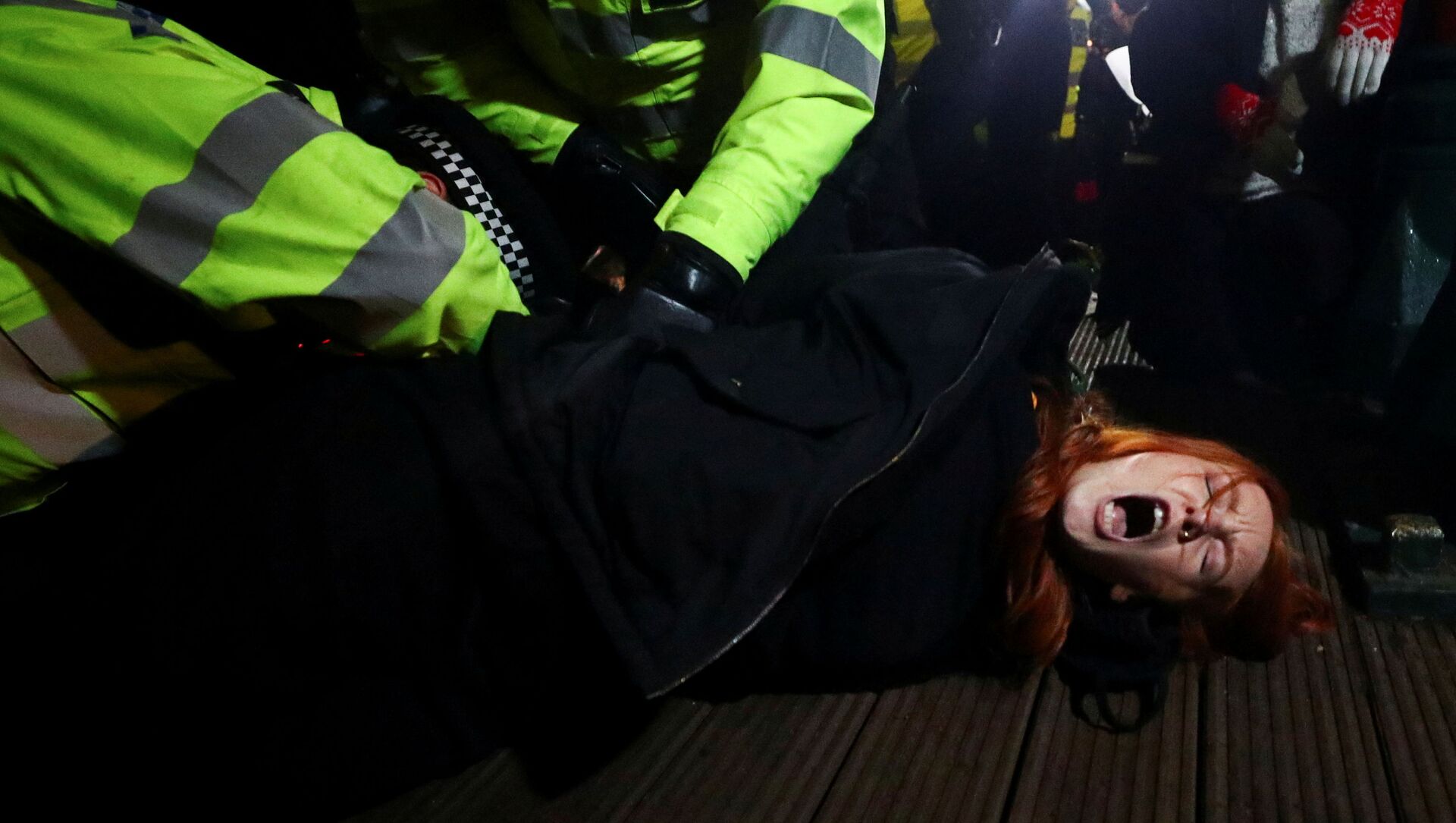 Mohamed Elmaazi
All materialsWrite to the author
Britain's government is in the process of debating a controversial law which will increase the state's ability to curb and control protests and the right of assembly.

The UK-based Network for Police Monitoring (Netpol) has launched a petition calling for the protection of the freedom to protest amid the government's attempt to pass the Police, Crime, Sentencing and Courts Bill which will increase the ability of the state to crack down on protests and demonstrations. Human rights analyst Evelin Lubbers recently warned that Britain is rushing through laws which "will not be easily repealed" and that "what we are seeing is the slow building of the framework for an emergency state".

Among the penalties proposed in the bill are prison sentences of up to 10 years for those who protest “intentionally or recklessly” and cause “serious annoyance, serious inconvenience or serious loss of amenity”. The Bill has already passed its first stage, having been voted through the House of Commons. There have already been demonstrations in Westminster and elsewhere as protesters call to "Kill the Bill".

Kevin Blowe co-founded Netpol in 2009 and has been its paid coordinator since 2015. Blowe explained to Sputnik why it is that Netpol has launched their petition, which has garnered nearly 200,000 signatures, at this time and what they hope to gain from it.

Sputnik: Last we spoke, you noted that the authorities wanted to introduce new restrictions on the right to protest. Since then, the Police, Crime, Sentencing and Courts Bill has been introduced into parliament and has already passed through the first stage in the House of Commons. Are there any unexpected developments that you were not aware of, now that the Bill is available for all?

Kevin Blowe: The bill does not include changes to stop and search powers to “prevent significant disruption”, which could include searches for items that protesters could potentially use for direct action or civil disobedience, such as D-locks or climbing equipment. This was one of the suggested ideas for new laws put to us by HM Chief Inspectorate of Constabulary, Fire and Rescues Services (HMICFRS) back in November 2020.

Britain is Experiencing the 'Slow Building of an Emergency State', Warns Civil Liberties Monitor
The inspectorate’s report, released the day after the bill was published, said senior police officers felt that, although contentious, such a change in the law would “send a message’ to more radical protest groups”. HMICFRS is still recommending this change, and it is possible the government might add it as an amendment later in the passage of the policing bill.

Sputnik: Netpol has initiated a petition proposing a Charter for Freedom of Assembly Rights, which has already garnered over 200,000 signatures. Why are you proposing it?

Kevin Blowe: HMICFRS reports says protesters deserve to know where they stand and offers, as a solution, replacing the existing common law offence of public nuisance with a new statutory offence, but we don't think this is a solution at all.

What campaign groups I have spoken to over the last seven years have told me repeatedly is that they never quite know when the police will suddenly decide to become more aggressive in the way they police protests. This uncertainty puts people at risk: at risk of arrest and injury, but also creates the risk of driving individual campaigners away from exercising their rights, out of fear of the consequences of violent and oppressive police tactics.

UK Government to Expand Police Powers and Further 'Restrict' Protests in 2021, Expert Explains
For years, we have said the police cannot begin to talk about “facilitating protests” when their approach is so arbitrary and unpredictable. We pushed for clear guidance, which was constantly delayed and when a draft finally appeared, it was concerned mainly with finding ways to shut protests down. It was so hopelessly misguided in its understanding of human rights that even HMICFRS criticised it. That is why we decided to write our own – the Charter for Freedom of Assembly Rights – based on a survey of national and local groups.

Sputnik: Why do you think your petition has gained so much support in such a short time?

Kevin Blowe: We are delighted but astonished by the response. Clearly the Metropolitan Police’s reckless decision to shut down a vigil in memory of Sarah Everard wakened tens of thousands of people to the imminent threat to their right to protest.

Last night @ReclaimTS worked so hard to persuade @metpoliceuk to work together to avoid scenes like these. pic.twitter.com/cShBDsepRt

​We hope that as well as galvanising opposition against the policing bill, it will also open up a wider debate in Britain about the policing of protests – and the role of the police in our society.

Sputnik: Even if this Charter does pass, what’s to stop it from being ignored or subverted the way the Human Rights Act has been in the past?

Kevin Blowe: The Human Rights Act is a vitally important piece of legislation but it is most effective at providing redress when rights are abused – often months or years later. It has failed, however, to create a cultural shift within state institutions that has strengthened beliefs, behaviours or outcomes that genuinely respect human rights. Neither is it explicit about how these rights should be protected in practice. Unless public institutions treat our human rights as the core to the way they conduct themselves – and offer clear principles about how this is achievable – then nothing will change.

​If the National Police Chiefs Council adopt our Charter, then it will offer a bench mark that campaigners can use to judge whether the police are ignoring their rights or not. There is nothing in the Charter that isn’t already covered by guidelines and statements that Britain has signed up to internationally and that our government calls on other countries to follow if they want to be considered democratic nations.

We see no reason the National Police Chiefs Council can reject the Charter. If they do, then we demand to know why.