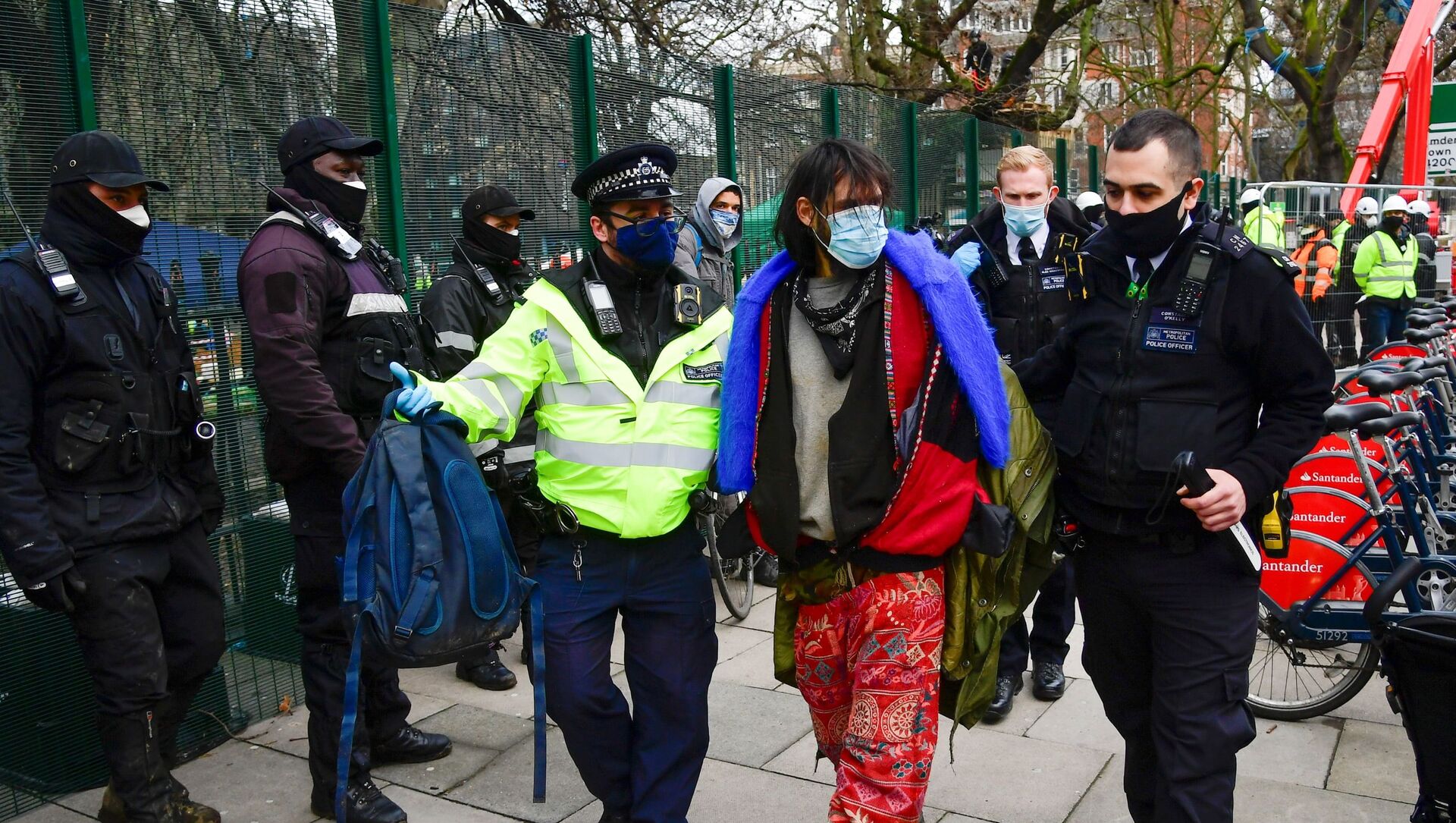 Mohamed Elmaazi
All materialsWrite to the author
The UK Government's focus on a "public order approach" to tackling the COVID-19 pandemic has not only undermined public trust, but has also expanded the curtailment of fundamental freedoms more widely, argues Eveline Lubbers, a long-time human rights analyst.

Eveline Lubbers PhD has been monitoring police, intelligence agencies and large corporations since the 1980s as an activist in Amsterdam. She is one of the founders of the Undercover Research Group to support activist groups infiltrated since 1968, and started the blog Policing the Corona State to monitor the enforcement of the lockdown rules with Kevin Blowe of Netpol.

Lubbers tells Sputnik that instead of placing the burden of the current COVID-19 health crisis onto the shoulders of everyday people and families, through focusing on enforcement and public order, a far more beneficial approach would be one which focuses on education, health and social solidarity.

Sputnik: What kinds of policies have you observed being implemented amid the COVID-19 pandemic that concern you the most?

Eveline Lubbers: In general, what is most worrying is the fact that the [British] government approached COVID-19 as a public order issue, instead of a public health crisis. And within that, the difference between ‘rules’ - as in: based in law - on the one hand and ‘guidance’ - as in: advice from the government - was often unclear. This provided a perfect recipe for those in police with a tendency towards authoritarian behaviour to bully people around.

UK Police Criticised Over Their Enforcement of COVID-19 Lockdown - Report
This resulted in 350 people being wrongly charged under laws covering coronavirus restrictions and some of them wrongly convicted last year. On top of that, more than 30,000 Fixed Penalty Notes were issued during the lockdown last year, many of which without the safeguard of a reviewing lawyer will have been issued unlawfully.

When the rules and guidance are not clear, and include too many exemptions, and when they change all the time, you’re making it very difficult for people to follow them – especially if those in power, the wealthy and the famous, behave like the rules do not apply to them.

Sputnik: Can you give some examples?

Eveline Lubbers: From very early on, people have been punished for going out, even though it was clear that the infection rate was less in open air. While getting out of the house and exercising is crucial for one’s physical and mental health, people were fined for wearing jeans as not the proper clothes to work out, or for taking a rest on a bench for a few minutes. A fortnight into the first lockdown in March, Derbyshire police posted drone footage to shame people walking their dogs in the Peak District.

Similarly, the police went as far to check people’s bags to see if their shopping was essential – which led to the infamous discussions if Easter eggs fell in that category.

Sputnik: How do you respond to the argument that these are extreme and emergency times which require more extreme measures by the state to contain the virus?

Eveline Lubbers: Of course, the times are extreme, and it was difficult at first to decide how to respond to the pandemic. But it would have been easier, had there been an idea behind the guidance and regulation that made sense.

The fact that things were constantly changing, the government did not always agree with health experts and seemed to take inconsistent steps which were more often than not too late as a result of incomprehensible hesitation, did not make things any easier.

Frequently, as with the PM’s flip-flopping guidance over Christmas celebrations, this only made things worse.

And to go back to what I said earlier, focusing on a public order approach has other consequences as well. It puts the blame for the infections on individual people, which distracts from those in government responsible for failing policies. And, as is important to emphasise, the ongoing ‘stay at home’ advice is harder for those who have smaller houses, less resources, less space and less job security – often parts of the Black, Asian and minority ethnic communities.

A public health approach to the pandemic would – apart from (re)investing in public health, education and social work, should be based on solidarity, on setting up networks to take care of each other, on keeping an eye out for those who are lonely and building opportunities for safe activities, instead of closing the parks in neighbourhoods where people have no other options.

​Sputnik: Do you see proposed changes to powers of policing as impacting on your assessment?

Eveline Lubbers: In the past year, changes to the regulations were almost always published just hours before they were to be implemented (or even after that) without Parliament having had a chance to scrutinise – let alone discuss or amend them. This is a serious danger to democracy, or what is left of it.

UK Government to Expand Police Powers and Further 'Restrict' Protests in 2021, Expert Explains
Laws that are rushed through this way will not be easily repealed – on the contrary, what we are seeing is the slow building of the framework for an emergency state. Experience tells us that it will be tempting for the state to use this legislature in less threatening situations.

A good example of such a tendency is the attempt to prosecute under counter-terror legislation seven activists for blocking a runway at Stansted airport to stop a deportation flight. Luckily, the appeal judges recently ruled they should never have been prosecuted under such an ‘extremely serious offence’, and quashed their convictions.

Sputnik: What, if anything, do you think needs to change regarding policing as we move forward into the new year?

Eveline Lubbers: For starters, better policing - if possible at all - starts with better rules and guidance, embedded in a consistent plan, based on democratically scrutinised regulation. Not only does that need to be clear, both for law enforcers and the public it applies to, the regulation has to make sense as well.

Policing will never be better if it continues to be rooted in environments where authoritarian and racist principles prevail, where the goal is to punish and control, instead of saving the society from a serious crisis.

In the short term, we need to monitor those who make the regulations and those who enforce it, in order to oversee their behaviour and violations and press them to do better – most won’t do it on their own. In the long term, we have to think of solutions that are not based on policing, but take a completely different approach to dealing with the pandemic - based on solidarity and making the world a better place. Step by step.