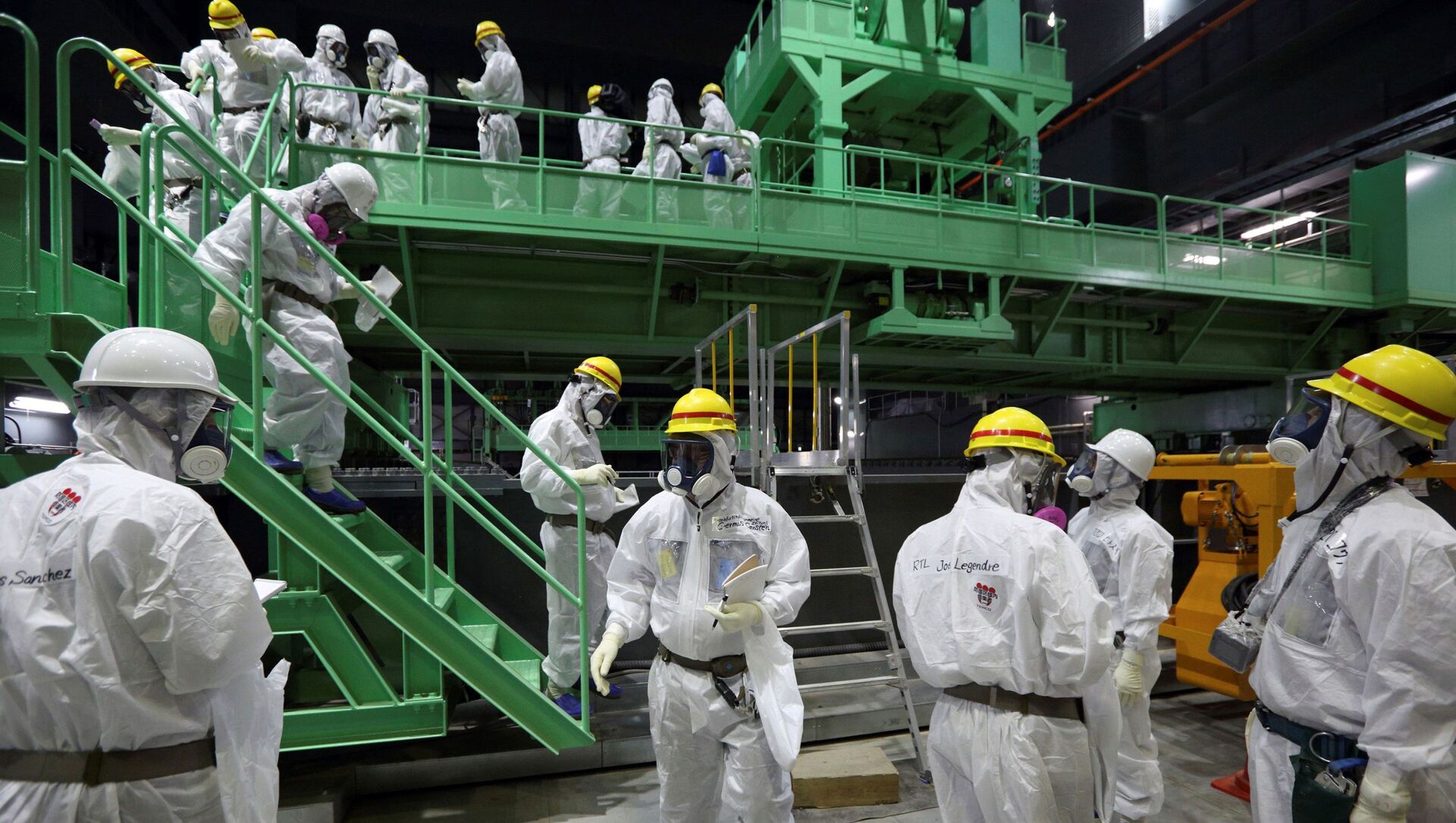 Mohamed Elmaazi
All materialsWrite to the author
10 years ago, on 11 March 2011, an earthquake measuring 9.0 on the Richter scale triggered a tsunami that crashed into Japan's Fukushima Daiichi nuclear power plant. The effect of the resultant meltdown will continue to be felt for generations to come, although it could easily have been far worse, Kevin Kamps of Beyond Nuclear tells Sputnik.

Kevin Kamps served as a radioactive waste specialist at the Nuclear information and Resource Service in the US for eight years and has worked with the non-profit organisation Beyond Nuclear since 2007.

On the 10th anniversary of the Fukushima Daiichi nuclear power disaster, Kamps explains the long-term consequences of the plant’s meltdown, noting admissions by the Japanese government that the country barely avoided an evacuation of 30–50 million people.

Sputnik: What exactly is it that happened at Fukushima Japan 10 years ago?

Kevin Kamps: What happened at Fukushima Japan 10 years ago, on March 11th, was one of the very worst nuclear power catastrophes in history that was caused when a 9.0 earthquake generated a 45-foot-tall tsunami that slammed into the six-reactor complex. Long story short, over the course of the next several days, three of the reactors melted down. They had been operating on March 11th and they were not able to cool them because the earthquake had destroyed the electric grid, which was the primary source of electricity to run safety and cooling systems.

And the tsunami wave had destroyed the emergency backup diesel generators, as well as the seaside cooling water pumps. So, there was no ability to cool the reactors and they melted down. Fortunately, the other three reactors on site were not operating that day or that would have likely led to six meltdowns. And also, luckily, just south by 11 kilometres, there's another nuclear power plant called Fukushima Daini - Daiichi means number one, Daini means number two. 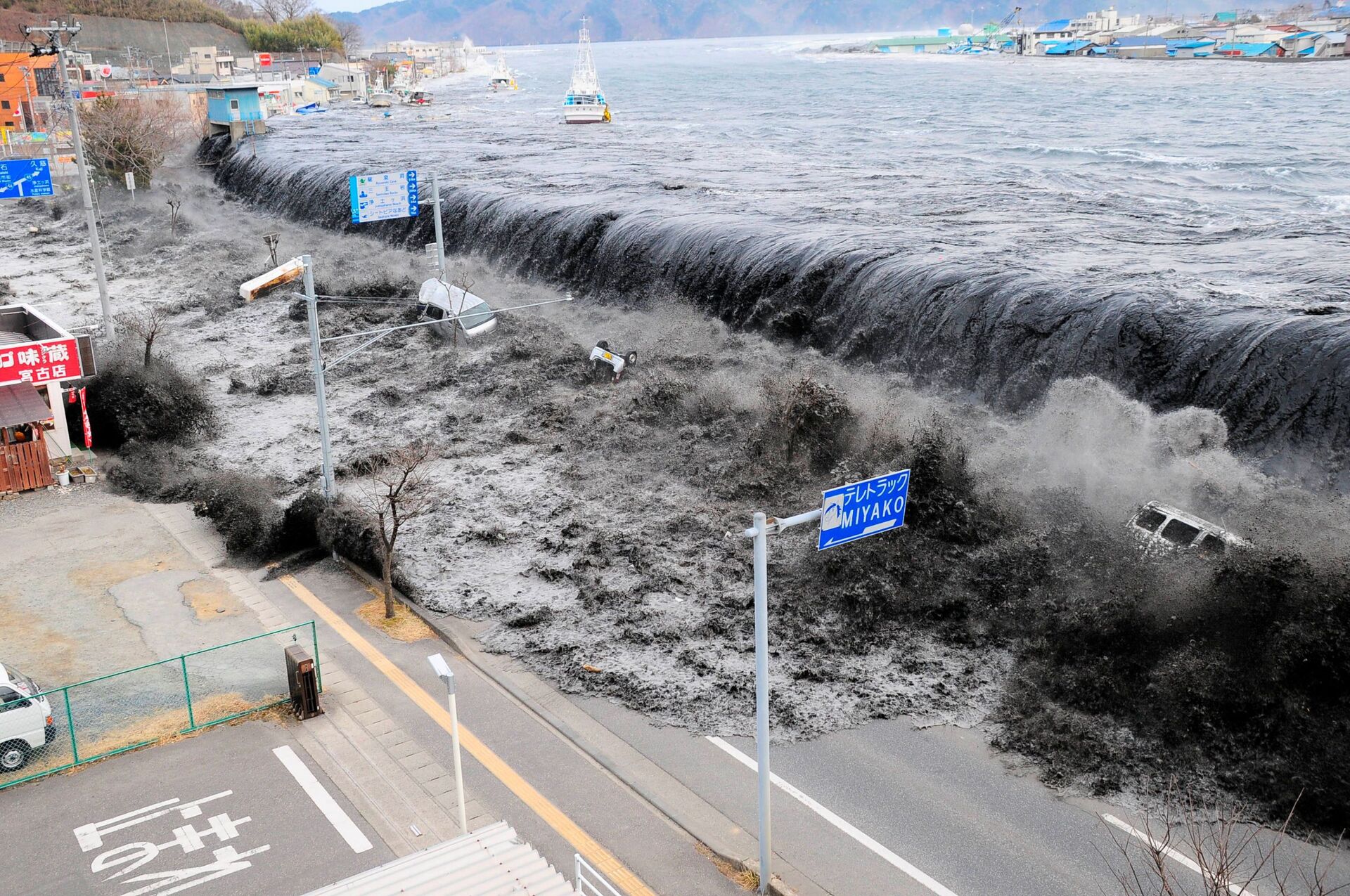 A wave approaches Miyako City from the Heigawa estuary in Iwate Prefecture after the 8.9 earthquake struck the area 11 March 2011
© REUTERS / Mainichi Shimbun

And there were four operating reactors at Fukushima Daini that day, the tsunami was actually bigger there, if you can believe that. And the only reason those four reactors did not melt down was a single offsite power line that survived the earthquake, and kept the safety and cooling systems operating, or that would have doubled or worse what we have experienced in the last 10 years.

A big question is why did this happen? The Japanese parliament did an investigation. It took them a year to complete it. Their conclusion was that it was the collusion between Tokyo Electric Power Company, the nuclear power industry and Japanese nuclear safety regulators and government officials that left Fukushima Daiichi nuclear power plants so very vulnerable to this, a one-two punch natural disaster that hit it. And that was the root cause - the collusion.

Sputnik: In what sense was 'collusion' between the state and the nuclear industry responsible for the disaster?

Kevin Kamps: [According to the Japanese parliamentary report] Tokyo Electric Power Company and the Japanese national government, specifically its nuclear safety regulatory agency, had plenty of warnings that a large-scale earthquake, and even a tall tsunami, could hit that plant, and other nuclear plants across Japan for that matter. Yet way too little was done about it.

Nuclear Power Will Lead to 'National Suicide', Argues Award-Winning Investigative Journalist
They just hoped it would never happen. But it did. The sea wall they had built was woefully inadequate, for example. It was easily overtopped by the tsunami. All the mistakes that led up to the catastrophic consequences had to do with this collusion. Wink wink, nod nod, between industry lobbyists and executives, safety regulators at all levels, government officials at all levels. Short cuts on safety and security, to save money, that is, boost profits, which pay astronomical executive salaries, even handsome take home pay for nuclear industry workers, kickbacks to local municipalities, revolving doors between industry and government.

And what's so frightening about that conclusion is that we have such collusion here in the United States, [with] massive campaign contributions to office seekers, and lobbyist expenditures. The media even gets hoodwinked in all this, both in Japan and in the US. In Japan, they call this "the Nuclear Village." Perhaps, in the US we'd call it the military-industrial-governmental-academic-media-nuclear power complex.

We [in the US] also have a couple three dozen, identical or similar nuclear power plants in design. These are General Electric boiling water reactors of the Mark I or Mark II design. The biggest in the world, for example, just south of Detroit by 25 miles, called Fermi Unit 2. So, I've described what happened and the consequences of what happened, where one of the largest releases of hazardous ionizing radioactivity in the environment that has ever occurred, into the ocean, into the air. Japan was hard hit with contamination.

The rest of the Pacific basin was hard hit with contamination, including the west coast of North America and the health implications of that, the genetic implications of that, will unfold for a very long time to come because these radioactive isotopes, which are hazardous caesium and strontium, for example, have at least a 300-year hazardous persistence, tritium 123 years, at least, plutonium, 240,000 years. So, in a sense, nuclear power disasters have beginnings, but they don't really have endings when you're talking about centuries or millennia or hundreds of thousands of years of hazard unleashed into the environment.

Sputnik: Could this be considered a freak accident? One that's unlikely to be repeated?

Kevin Kamps: Unfortunately, not. There have been now several major nuclear power reactor meltdown disasters: Three Mile Island in Pennsylvania USA in 1979, Chernobyl in Ukraine in the Soviet Union in 1986. So many close calls to reactor meltdowns. It's almost too many to enumerate and there've been other nuclear power related and nuclear weapons related disasters over the decades. So, these are actually fairly predictable. And I have colleagues who now refuse to call these accidents because these are foreseeable. This is a calculated gamble. That's being taken every day at some 400 plus atomic reactors across the world, with more planned.

'Brutal Truth': Fukushima's Radioactive Water Threatens Life Worldwide, Warns Environmental Journo
So, these are not accidents. These are predictable. These are gambles. This is a high-risk technology. And you know, sometimes there are those who would say that nuclear power is somehow essential to solving the climate crisis. That's not true. And what's ironic is as extreme weather worsens nuclear power will be ever more unsafe to operate and we could well see a climate change-induced nuclear catastrophe. One example that comes to mind was a reactor in Nebraska USA called Fort Calhoun, just in the weeks and months after Fukushima Daiichi began, there was a historic flood on the Missouri river and the Fort Calhoun nuclear power plant was inundated.

They had to take extraordinary measures to keep the floodwaters out of the reactor building out of the radioactive waste storage areas. And that reactor never recovered from that climate change induced disaster that almost led to a nuclear catastrophe here in the United States, back in the spring and summer of 2011.

Sputnik: Finally, how is it that nuclear waste safely managed and disposed of so that it no longer poses any danger?

Kevin Kamps: Well, it's not. We don't know what to do with it. High-level radioactive waste is stored in indoor wet storage pools. That's where the majority of American high-level radioactive waste is stored. What almost happened at Fukushima Daiichi, another lucky break, was that the wet indoor storage pool at unit four nearly caught fire, and it was sheer luck that it did not. And just to give you an idea of what that could have meant for Japan, there have been 160,000 nuclear evacuees due to the meltdowns, the failures of the containments.

If that pool had caught fire, and pools are not even inside containment, the Japanese prime minister serving at the time, Naoto Kan, a year after the disaster began, admitted that he had a secret contingency plan, if that pool had caught fire, to evacuate 35 million to 50 million people from North-eastern Japan and metro Tokyo. He said it would have been the end of the Japanese state.

Here in the United States where the majority of our high-level radioactive waste is still in this vulnerable indoor wet pool storage, our pools are much more densely packed than Fukushima Daiichi Unit four was on March 11th, 2011. So, we don't have an answer. We do not have deep geologic disposal repositories. Yucca mountain, Nevada, has proven to be a failure. Besides the Western Shoshone Indians [Native Americans] did not consent, it violated their treaty rights to that site, but it's also scientifically unsuitable. So, we're right where we began in 1942, when Enrico Fermi first split the atom, created the first high-level radioactive waste during the Manhattan Project race for the atomic bomb. We don't know what to do with the first cup full of high-level radioactive waste in this country.

*This article is the product of a video interview and responses submitted via email and has been amended for clarity and concision.