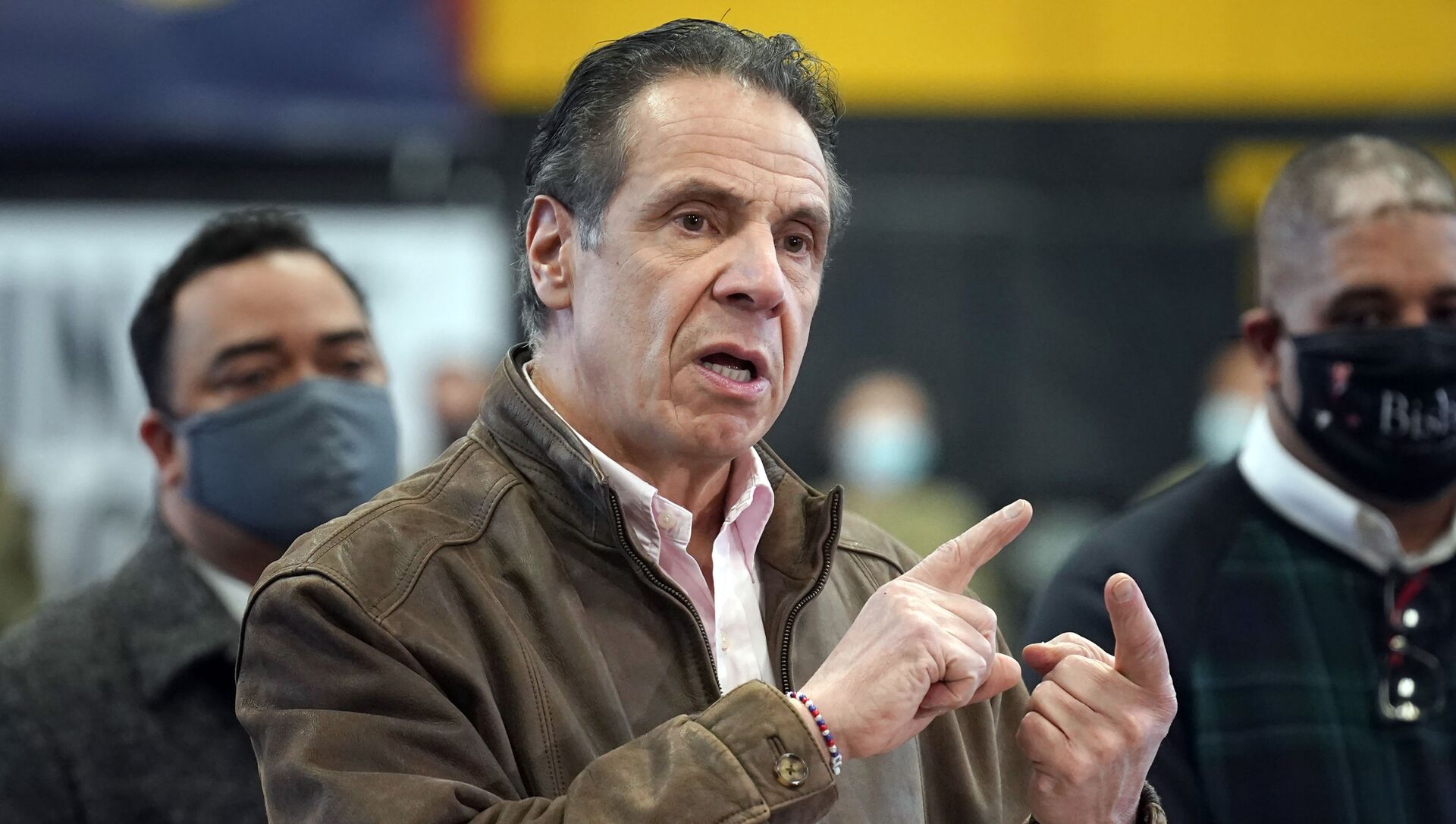 Aleksandra Serebriakova
Moscow-based Sputnik correspondent specializing in foreign affairs.
All materialsWrite to the author
New York Governor Andrew Cuomo is facing two separate reputation crises at the moment: the first relates to a recent report revealing that his administration hid thousands of COVID deaths in the state's nursing homes, while the other to sexual harassment accusations from his ex-staffers, which he denies.

The office of New York Governor Andrew Cuomo was formally ordered to preserve all files relevant to the sexual harassment probe against him, which is being overseen by NY Attorney General Letitia James, The New York Times reports.

Cuomo is facing sexual misconduct and harassment allegations from three women, including two former employees who accuse the politician of inappropriate touching and sexually charged conversations.

Cuomo’s spokesman Richard Azzopardi confirmed to the Times that the request to safeguard all the records in question was received by the governor’s office on 1 March.

“Our counsel’s office acted promptly and notified all chamber staff of their obligations associated with that,” the spokesperson stated.

While the request follows standard investigation protocol, the governor is facing serious scrutiny; apart from harassment claims, Cuomo is also being targeted by another probe alleging that his office underreported as much as 50 percent of COVID-related deaths among nursing home residents during the coronavirus pandemic last year. The report on the scandalous issue was released by AG James’ office this January.

In December 2020, Cuomo’s ex-aide Lindsey Boylan came forward to accuse her former boss of “years” of harassment and unwanted touching, including a forced kiss. Her revelation was shortly followed by allegations from another former staffer Charlotte Bennett.

Bennett, 25, claimed in an interview aired by CBS News this week that she was repeatedly asked by the governor about her past experience of rape, her intimate relationship with “older men,” and even whether she was able to enjoy sex despite the trauma of her assault.

​The former staffer told CBS’s Norah O'Donnell that she was sure that the governor, then 62, was “trying to sleep” with her following their one-on-one conversations in his office during May and June last year. She said the exchanges left her “deeply uncomfortable” and “terrified.”

“Without explicitly saying it, he implied to me that I was old enough for him and he was lonely,” Bennett disclosed.

The woman says that she reported the incidents to the governor’s chief of staff through channels Cuomo established in 2018 in the wake of #MeToo movement. Bennett is not sure whether the complaint had progressed but she was transferred to another job in the State Capitol shortly after.

The former adviser also recalled that she once heard how Cuomo’s director of governor’s offices told her boss that she had completed his required sexual harassment training for him. Cuomo’s lawyer has denied this claim.

The governor has dismissed all sexual assault allegations, claiming in a statement last weekend that some of his moves or “unwanted flirtation” could have been “misinterpreted.”

Following these remarks, another woman accused the governor of unwanted advances and harassment during a wedding reception in September 2019.

On Wednesday, Cuomo issued a televised statement saying that he “now” understands that he had “acted in a way that made people feel uncomfortable."

“It was unintentional and I truly and deeply apologise for it. I feel awful about it and, frankly, I am embarrassed. And that's not easy to say,” the politician said, stopping short from admitting that the women’s claims were true.

Cuomo maintained that he would not resign over the sexual harassment allegations and urged the public to wait for the result of the probe into the matter that was announced by AG James’ office this week.