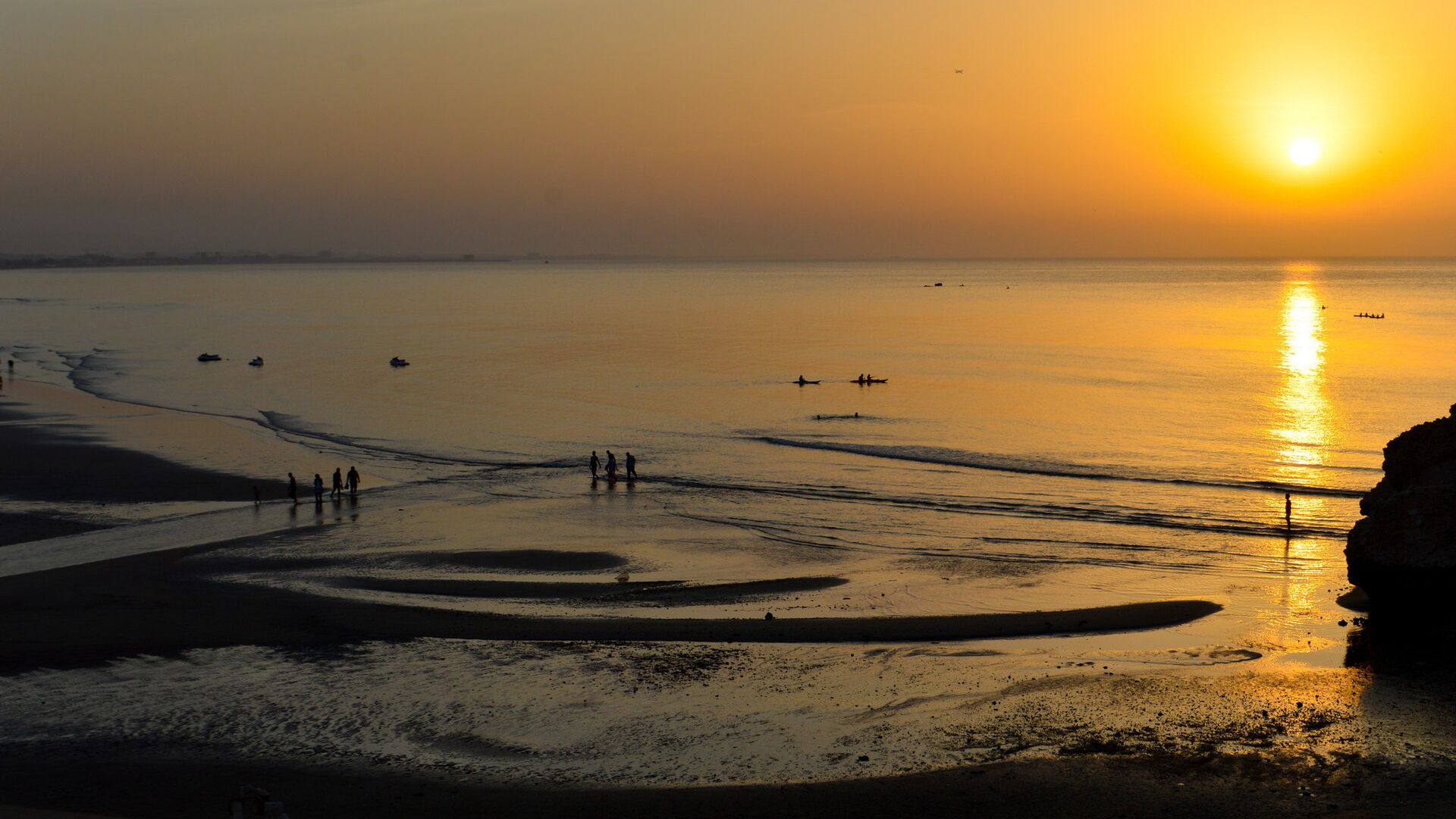 CC BY 2.0 / Francisco Anzola / Late afternoon at the beach
Subscribe

Oleg Burunov
All materialsWrite to the author
On Friday, the maritime security risk management firm Dryad Global identified the vessel as the MV Helios Ray, which is reportedly owned by an Israeli businessman, but sails under a Bahamian flag.

An explosion that ripped through an Israeli-owned cargo ship in the Gulf of Oman on Thursday could be the work of Iran, The Times of Israel reports, citing unnamed Israeli officials as saying.

Unsourced reports from the Israeli media outlets Haaretz and Channel 13 claimed that Iran knew that the vessel was owned by an Israeli businessman - who himself rejected the speculation pertaining to the Islamic Republic.

A separate unsourced report by Israel’s Channel 12 asserted that the explosion was caused by a missile fired by an Iranian warship.

This was echoed by the maritime risk-management firm Dryad Global, which tweeted on Friday that the blast could possibly stem from “asymmetric activity by Iranian military”. Tehran has not commented on the matter yet.

The company identified the ship as the MV Helios Ray, claiming that the blast took place as the vessel with 28 crew members on board was about 44 nautical miles (50 miles) from Oman's capital Muscat.

Israeli officials believe #Iran was behind the explosion on the Israeli cargo #ship in the Gulf of Oman. The ship was not disabled, and no one was injured aboard. Neither Iranian nor #Israeli officials have officially reacted to the report. pic.twitter.com/q6Y6VUgh1A

No one was reportedly hurt in the blast, which ostensibly caused several holes in the port and starboard sides of the ship, owned by Israeli businessman Abraham Ungar, founder of Ray Shipping Ltd.

The maritime risk intelligence company Ambrey Intelligence posted a raft of photos on its Twitter page, thought to show damage to the Helios Ray as a result of the explosion. The authenticity of the images has yet to be confirmed.

The Israeli media reports come as the satellite-tracking data from the website MarineTraffic.com showed that the explosion-hit cargo ship arrived at a Dubai port earlier on Saturday.

This was preceded by Ungar being quoted by the Ynet news outlet as claiming that the explosion was most likely caused by “missiles or a mine placed on the bow”.

“Israeli authorities will investigate this together with me. I don’t think this deliberately targeted an Israeli-owned ship. That has not happened to me before”, the businessman added.

He reportedly went even further by asserting that the blast could be “part of the game between Iran and the US, that’s why they are hitting Western ships”.

The claims come after the United Kingdom Maritime Trade Operations (UKMTO) said, without providing further details, that a ship was hit by an explosion in the Gulf of Oman at 20:40 GMT on Thursday. The UKMTO added that “investigations are ongoing” and that the “vessel and crew are safe”.

The developments come amid increasing tensions between Tehran and the US, Israel’s ally, which escalated on 25 February, when two F-15 jets launched seven missiles in Syrian territory, following an order from US President Joe Biden.

The attack destroyed nine facilities and partially damaged two facilities, making them unsuitable for use. The facilities were used, according to Washington, by Shia militia group Kata'ib Hezbollah and other formations that are believed to be behind attacks against American military assets in Iraq.

Iran denounced the US airstrikes as "aggression" and a "violation of international law", insisting that the US presence in Syria is illegal. The attack was also condemned by Syrian authorities as a "cowardly aggression" that will “lead to consequences that will escalate the situation in the region”.

President Biden, for his part, said that Thursday's US airstrikes are a message to Iran: "You can't act with impunity. Be careful”.

US-Iranian tensions have been in place since then-President Donald Trump announced Washington’s unilateral exit from the 2015 Iran nuclear deal, also known as the Joint Comprehensive Plan of Action (JCPOA), in May 2018, and the reinstatement of strict economic sanctions against the Islamic Republic. Exactly a year later, Tehran announced that it had started scaling down some of its JCPOA obligations, including those related to uranium enrichment.

Iran Schedules Gulf of Oman War Games One Day Before Biden Inauguration
As far as Israel and Iran are concerned, relations between the two sides remain frozen, with Tehran denying the Jewish state's right to exist and frequently pledging to destroy it.

Over the last few years, Israel has reportedly carried out a number of airstrikes on Syria, which Tel Aviv says are aimed at countering the alleged Iranian military presence in the Arab Republic. Damascus condemns such attacks as violations of Syria's national sovereignty, while Tehran insists that there are only Iranian military advisers in the country to help the government fight terrorists.